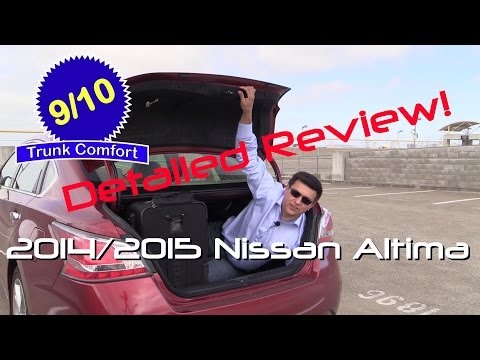 The “family sedan” may not be very exciting, but without midsized sales auto makers would be in a pickle. Ponder this: the five best-selling midsized sedans in America accounted for 1.3 million of the 12.8 million vehicles sold in 2011. With numbers like that, it’s important to get your mass-market people mover right. This means competitive fuel economy, a low base price and swipe as much tech from your luxury brand as possible. Either that or just wear a Nissan badge on the front. Say what? The last generation Altima was the second best-selling car despite being long in the tooth and filled with some questionable plastics. This Altima has a tougher task however, it needs to compete with Honda’s new Accord and Ford’s sexy Fusion which is selling like hot cakes. Can Nissan’s traditional value proposition make up the difference? Or does the Altima have something else up its sleeve?

A design that doesn’t alienate the customer you expect to return and buy their second or third car is critical. Just ask Ford how that bubble-Taurus redesign went in 1996. Still, midsize sedan shoppers demand some style so Nissan’s design team jammed a bit of Maxima, a pinch of Infiniti M and a “whole-lotta” Versa into a sausage press and cut the Altima off at 191.5 inches. This makes the new Altima longer than a Camry, a hair longer than a Maxima and essentially the same size as the Accord and Fusion. Nobody will confuse the Altima with an Aston Martin, nor will they think their neighbor is driving a budget Bentley. Instead the slab-sided Altima delivers clean lines and elegant good looks. Think of it as the Midwestern farm girl to the Fusion’s Los Angeles call girl.

Since our tester was the top-of-the-line SL, the cockpit featured a heated tilt/telescopic steering wheel, an 8-way power driver’s seat and manually adjustable lumbar support. Shoppers that chose the 3.5L V6 will be treated to a pair of the best looking and best feeling magnesium paddle shifters this side of a BMW M6. Seriously. There’s just one problem: paddle shifters on a car with a CVT make as much sense as a parking brake on a french poodle. (Yet for some reason I found myself caressing their magnesium goodness non-stop when I was behind the wheel.) Like the most entries in this segment, the front passenger seat remains manually adjustable regardless of trim level and upholstery. Thanks to Nissan’s “Zero Gravity” seat design, the front seats proved comfortable and didn’t’ aggravate my temperamental knee during a 2 hour road trip. Since manufacturers “march to their own drummer” when measuring legroom, take your family to the dealer and jam them all in the car before making a purchase.

The crash diet and CVT pay dividends at the pump.  The Altima 2.5 manages 27/38/31 MPG (City/Highway/Combined) and does so without direct injection, start/stop, batteries or aero packages. What about that V6? Nissan’s focus on weight has made the Altima 3.5 lighter than the Accord V6 and Fusion 2.0 Ecoboost by over 200lbs. In our 3.5 SL I averaged an impressive 27.6MPG over a week of mixed driving. This is notably above the 25MPG combined EPA score despite my commute and the 2,200ft mountain pass I cross twice a day. You can thank the light curb weight and CVT for that. The Accord V6 matches the Altima’s combined EPA number and the Fusion trumps it by one MPG on paper. In the real world, the Altima beat both by 4MPG.

When the road curves, a light chassis will only get you so far, thankfully Nissan tuned the Altima’s suspension to be compliant but surprisingly agile. Adding to the fun-factor, all V6 models are shod with 235/45R18 rubber, notably wider than the V6 Camry’s standard 215 or optional 225 tires. The suspension, curb weight and tires combine to give the Altima a slightly higher road holding score than the Fusion 2.0 Ecoboost we got our hands on, but numbers aren’t everything. The Fusion’s steering may be numb, but it manages more feeling than the Altima and even I have to admit the CVT sucks the fun out of aggressive driving. If that matters to you, drive past the Nissan dealer and pick up a Fusion 2.0T with or without AWD.

Some may call this a cop-out, but in my book the Accord, Fusion and Altima tie for first place in my mind. Here’s why: each of this trio plays to a different audience. The Fusion is gorgeous, more dynamic than the Altima but has stumbled with the 1.6L Ecoboost quality issues. The Accord is a traditional choice with a solid reputation and greater visibility thanks to an enormous greenhouse. Meanwhile the new Altima is a stylish elegant sedan with a powerful and seriously efficient V6. If I were dropping my own money on a sedan in this category I would have a hard time choosing between the Altima 3.5 SL and a Fusion 2.0 Ecoboost.