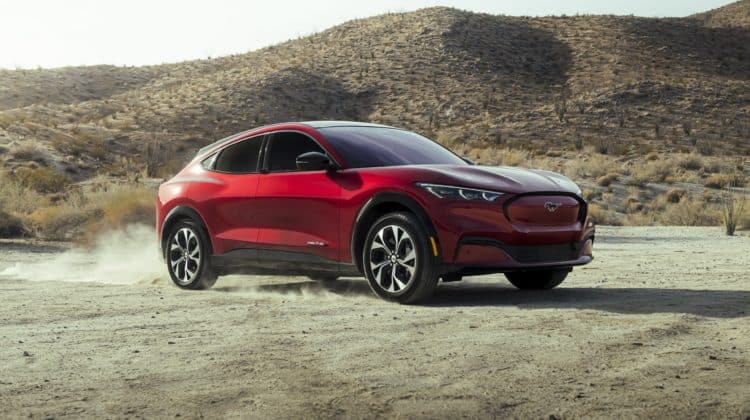 A few months have passed since we’ve got the 2021 Ford Mustang Mach-E. Alex likes it a lot more than expected but the factories are too narrow for the amount of power you get even with this Premium dual-motor model. At 225/55R19s, they’re not that wide; in fact, they’re narrower than the rubber you’d find a range-topping Honda Civic Touring. They’re also Michelin Primacy all-season tires, which is an efficiency-focused all-season tire made to maximize range and fuel economy, not performance.

To see how tires affect the 2021 Ford Mustang Mach-E, Alex went ahead and swapped them for 245/50R19 rubber, the same width as the performance-oriented GT variant. That got mounted to a wheel that appears to come from a Lincoln MKZ. The tires chosen are Pirelli P Zero summer performance examples, meaning they’re wider and stickier than the original one. With the help of Sprint Motorsports, we were able to swap the right tire and rim along with their tire pressure sensors and other parts needed to make sure they’re installed properly. We also added 5-m spacers to clear the brake rotors and calipers.

The last time we did the range testing loop in the Mustang Mach-E, it came in at 278 miles. When equipped with wider wheels and tires, that number dropped to 265, which is a 3 to 4 percent drop. Keep in mind that tires aren’t going to cause a huge hit in a battery-electric vehicle’s range. Its aerodynamics and weight factor in more than tire size, which is one of the reasons why the Tesla Model Y retains its high efficiency. Although it won’t go as far as the Mach-E in Alex’s range test loop, its smaller battery combined with other factors like better motor and inverter efficiency allows it to travel a similar distance.

The performance also improved because of the wider, stickier tires. Braking performance improved to similar numbers when the Mach-E was still new, stopping from 60 mph in 109 feet versus just a smidge of 120 feet with the well-worn original rubber. Grip levels were also better, allowing the Mach-E to hold the road better with the grippier tires. You don’t notice the tires squealing or shuffling, the crossover just sticks to the road like glue and powers out of corners effortlessly. That means if you’re looking to drive your Mach-E spiritedly or do so often, tires will be one of your most meaningful upgrades, especially if yours isn’t a GT.

Despite being wider and having a lower profile, the new set of tires didn’t affect ride quality that much. In fact, it’s very similar to the standard setup; however, if you get a larger 20-inch wheel, that you could be sacrificing a little comfort for the added grip and better handling. In total, the four new tires cost $430 and the wheels averaged $250 each. The work done at Sprint Motorsports costs around $220 dollars for the whole job. Keep in mind that the cost of operation will go up because summer tires don’t last as long as the standard all-seasons and they’re pricier to buy and keep too.

This also shows that the 2021 Ford Mustang Mach-E GT’s range is totally rational. We got a similar range with a similar tire, meaning it’s plausible to meet or beat the recently revealed EPA range estimates for the hotter versions.