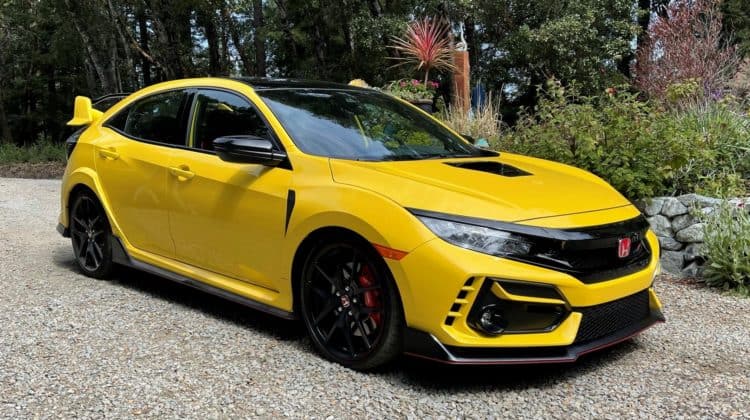 Make no mistake that the 2021 Honda Civic Type R remains the king of hot hatches. No other entry in this segment possesses the same level of balance, engagement, practicality, and power. When it first arrived in the U.S. for the 2017 model year, the hottest Civic immediately became an enthusiast’s sweetheart. It was one of the most well-rounded cars under $40,000, making it an even more tempting proposition.

There are caveats to that, though. The 2021 Honda Civic Type R sticks out like a sore thumb in a sea of beige crossovers. Why? It takes the already extroverted design of the standard Civic hatchback and turns in up to 20. Key design cues include a hood scoop, larger side vents on the lower front fascia, wider fenders, a black front splitter, black side sills, black rear diffuser, three exhaust outlets, and that massive rear wing.

For 2021, Honda added a new Limited Edition model finished in a heritage color called Phoenix Yellow. It also gets a retuned suspension and steering, lightweight BBS wheels, Michelin Cup 2 performance tires, and gloss black roof and side mirror covers. To further reduce weight, the Civic Type R Limited Edition has less sound deadening versus the standard model. In total, the Limited Edition is 50 pounds lighter than the regular car. Production is capped at 600 units and pricing starts at $43,995 before the $955 destination fee. Versus the standard model, that’s a premium of $6,100.

Based on the Touring grade, the Civic Type R gets a long list of standard features including the Honda Sensing suite of driver assistance features. You also get built-in navigation, a 7.0-inch touchscreen, Android Auto and Apple CarPlay, a 540-watt audio system with 12 speakers, 20-inch wheels shod in summer performance tires, and LED headlights. Go-fast goodies include adaptive dampers and a limited-slip differential. The Civic Type R has three drive modes to choose from; however, you don’t have a custom mode, preventing you from mixing and matching the different characteristics of each one.

Under the hood of the Civic Type R is a 2.0-liter turbo-four with 306 hp and 295 lb-ft of torque. The only transmission option is a six-speed manual with automatic rev-matching. As a result, the Civic Type R is one of the most enthusiast-focused hot hatches available. That also limits its appeal because the majority of the population that don’t know how to row their own gears will eventually go to competitors like the Volkswagen Golf R.

Should you be one of the few lucky ones to pick up a Civic Type R (hopefully without a markup), you’re in for a treat. It remains the best driving hot hatch money can buy. You get an impeccable balance of a compliant ride, sharp handling, and lots of power. Complementing that is one most satisfying shifters you’ll ever get to row, offering a nice bolt action feel every time you swap cogs. Telepathic steering completes the whole package, giving you a connected driving experience that punches well above its weight.

This was the perfect swan song for the 10th generation Civic, which has remained one of the class benchmarks since its arrival. However, this means expectations for its successor, especially for the two performance variants. The 2021 Honda Civic Type R Limited Edition is the ultimate iteration in every way because it turns up the dial ever so slightly but without sacrificing what made the car so beloved. We can’t wait to see what Honda has in store for the 11th generation Civic.