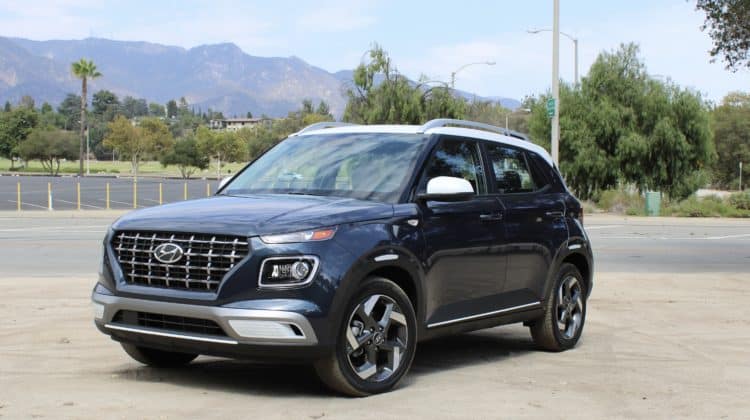 As the average transaction breaks past the $40,000 mark, new cars are starting to get out of the price zone of many consumers. Luckily some automakers have made sure that they still offer one or two models that offer modern accouterments at affordable prices. One of those vehicles is the 2021 Hyundai Venue. This small crossover effectively replaces the Accent hatchback in Hyundai’s lineup and goes head to head with the Nissan Kicks. With value being an important part of this entry-level segment, can Hyundai’s smallest crossover attract consumers that would otherwise be looking at a used vehicle? Let’s take a look.

The first thing you’ll notice with the 2021 Hyundai Venue is its size. This crossover is small. As in very small. With a 99.1-inch wheelbase and a total length of 159 inches, it’s shorter than the mechanically similar Kia Rio hatchback. In fact, the Nissan Kicks’ wheelbase is 4.0 inches longer and it’s 10 inches lengthier than the Venue. That small footprint is a boon for city dwellers, though, because it enables the Venue to easily dart through traffic and squeeze into the tightest parking spaces.

Hyundai’s current crossover design language works well despite the Venue’s tidy dimensions. You get the family look but with a character all of its own thanks to the egg crate-like pattern on the grille and the squared daytime running lights. Additionally, the cool Z pattern on the LED taillights gives the Venue’s rear end a unique styling treatment all its own, further distinguishing it from its larger siblings. The Denim Edition’s dark blue/white exterior adds a sense of youthfulness and vibrancy to the already stylish exterior. At the same time, the crossover doesn’t look like it’s just an extra small version of the big one.

Thanks to its upright greenhouse, the Venue feels airy for its size. You’ll fit four average-sized adults in the cabin but only for short trips because legroom is limited in the rear; headroom, on the other hand, is fairly generous. Keep the center position for children since the Venue’s narrowness makes it less usable for fully-grown humans. The upright greenhouse, combined with the nearly vertical hatch helps maximize interior space in a small package. Hyundai also added a nifty two-level cargo floor for added flexibility. Should you need to stow the hard cargo cover in a jiffy, it seamlessly slides into a slot behind the rear seats. Our Denim Edition test car came sporting cool leatherette upholstery with cloth inserts that look like the same textile used to make jeans, and white armrests and lower dash to give it a nice contrast.

Considering its starting price of under $20,000, it’s no surprise that the Venue’s interior is packed with hard plastics. At least Hyundai did a good job with the textures so that the surfaces you interact with don’t feel chintzy. The armrests on the doors are also thinly padded, meaning you don’t need to rest your arms on a hard surface. On the highway, there’s a good bit of wind noise entering the cabin, which is most likely due to the crossover’s upright profile.

Hyundai offers a generous list of driver assistance features on the Venue. Even the least expensive model gets forward collision warning, front automatic emergency braking, pedestrian detection, and lane-keeping assist. The SEL and Denim Edition gets you rear cross-traffic alert and blind-spot monitoring. Every model gets a user-friendly infotainment system with an 8.0-inch touchscreen and Apple CarPlay and Android Auto compatibility. Strangely, if you get embedded navigation, you lose the wireless smartphone integration. Unlike its chief competitor, the Nissan Kicks, you don’t have an option for an upgraded audio system; all you get is either a base four-speaker unit or a six-speaker one in the SEL and Denim Edition.

Think of the Venue as a tall city car because that’s exactly what it is. The short wheelbase makes it easy to maneuver in tight spaces and gives the crossover a tossable character on the road, especially with its tight steering. Although it’s not sporty, the Venue feels handy and light on its feet, especially when darting through traffic. Unfortunately, the trade-off for the short wheelbase is ride comfort. Over broken pavement, especially big bumps and successive ruts and expansion joints, the Venue can feel bouncy. Even with the thick sidewall on the optional 17-inch alloy wheels, impacts could be better dispatched. The tall greenhouse also results in a higher center of gravity, meaning the Venue gets tipsy if you start driving it aggressively on a winding road. Like the Kicks and Toyota C-HR, the Venue is FWD only; however, it distinguishes itself by having a Snow mode option for maximum traction in slick conditions.

With only 121 hp and 113 lb-ft of torque on tap from its 1.6-liter four-cylinder, the Venue isn’t very powerful. Fortunately, it’s also light at just over 2,700 pounds, preventing it from feeling languid and lazy. The CVT also deserves a lot of credit because it makes good use of the available power. Put your foot down and it immediately puts the car in its sweet spot. Switching to Sport mode gives the car a more energetic character thanks to improved throttle response. In comparison, the Venue feels livelier whereas the Nissan Kicks is a little more relaxed.

For those on a budget and who want a new car, the 2021 Hyundai Venue is a strong value proposition because it gives you a lot for not much money. Even our loaded Denim Edition model tops out at just over $22,000 before that pesky destination charge. Like its cousins, the Kia Rio and Hyundai Accent the Venue proves that basic transportation doesn’t mean you’re getting a penalty box. Although it has its weaknesses, there’s plenty to like in this package. Yes, the Nissan Kicks is roomier and has more available tech and convenience features, a roomier interior, and is slightly more efficient at 31/36/33 mpg city/highway combined versus the Hyundai’s 30/33/31 mpg rating. The Venue counters that with livelier road manners, a slightly lower price tag, and a longer warranty that includes complimentary oil changes for the first three years or 36,000 miles. Whether you choose one or the other will all come down to your personal preferences. If you choose the Venue, you’ll be sure to enjoy its quirkiness and lively character during your daily commute.

2023 Honda HR-V First Drive: I recently had the chance to spend some time … END_OF_DOCUMENT_TOKEN_TO_BE_REPLACED