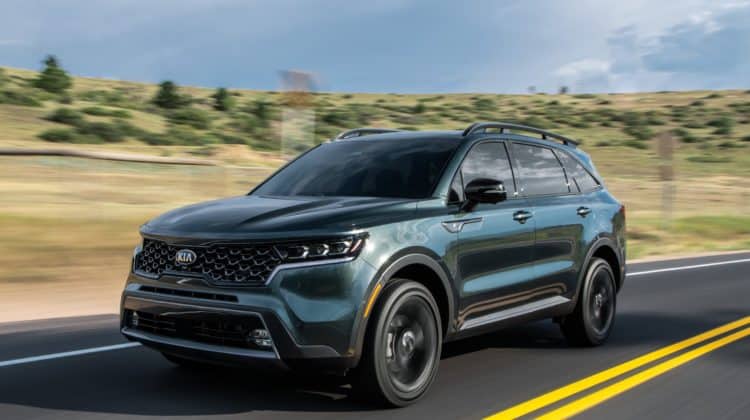 The 2021 Kia Sorento may just be one of the most misunderstood crossovers on the market. Why? Mainly because it’s a tweener three-row. It’s smaller than the Telluride but it still has a more accommodating cabin than the Toyota Highlander. Kia also styled the Sorento differently, taking cues from the K5 midsize sedan instead of its larger sibling. Think of the new look as an evolutionary change because it’s essentially more chiseled than before but the family resemblance to the outgoing Sorento is still there. The SX X-Line model gives the Sorento a more rugged look, 20-inch alloy wheels, and additional ground clearance at 8.2 inches versus 6.9 inches for the rest of the lineup.

Although it’s smaller than your typical three-row crossover, the 2021 Kia Sorento still has a usable third row for quick lunch runs. The downside is cargo capacity because there isn’t much with all seats up. Keep the third row folded if you want to maximize cargo space. The interior materials, on the other hand, are nice and tactile, giving the cabin a wonderful fit and finish. You can also get two-tone interior colors if you want to add some color to the cabin and some cool diamond patterns. Kia’s latest infotainment system uses a 10.25-inch touchscreen on higher ends and is complemented by a 12.3-inch digital gauge cluster. It uses a combination of physical and haptic feedback controls; luckily it’s still user-friendly. Unfortunately, getting the larger display means giving up wireless Apple CarPlay and Android Auto because, for some reason, only the smaller screen can support it without cables.

If you’re set on the X-Line model, keep in mind that it’s only available with the 281-hp 2.5-liter turbo-four paired to an eight-speed dual-clutch automatic transmission. AWD is standard, too, and EPA fuel economy ratings are 24/28/21 mpg city/highway/combined. The tradeoff? Straight-line acceleration. Put your foot down and Sorento moves effortlessly for its size. You get a slight delay from the transmission and a hint of turbo lag but once it’s moving, the crossover gains speed quite quickly. The dual-clutch transmission’s responsiveness also makes the crossover accelerate quicker. Put your foot down and you get immediate reactions. Just make sure you’re fine with the quirks of a DCT like lurching at very low speeds and rolling backward on steep hills.

The wide tires give you short braking distances, which adds to the Sorento driving more like a smaller compact crossover. Great handling also enhances the Sorento’s car-like feel on the road even with the increased ground clearance. However, the 20-inch alloy wheels hurt ride quality because you feel the road imperfections more prominently when you go over them. The wider tires also create more noise, meaning you’ll hear more in the cabin, especially when you consider the lack of sound deadening in the wheel wells.

Think of the 2021 Kia Sorento as the solution if you’re looking for something with additional flexibility but want a more car-like driving experience. Even with the X-Line’s added ground clearance, the Sorento still handles more like a car than a three-row crossover. Between that and the 2.5-liter turbo-four’s power, the Sorento is a strong contender. It’s only going to get stronger with the arrival of the PHEV version, which will be available only on the SX grade and AWD standard. You can also currently buy a standard Sorento Hybrid but it’s FWD only and is offered exclusively in the S and EX grades.