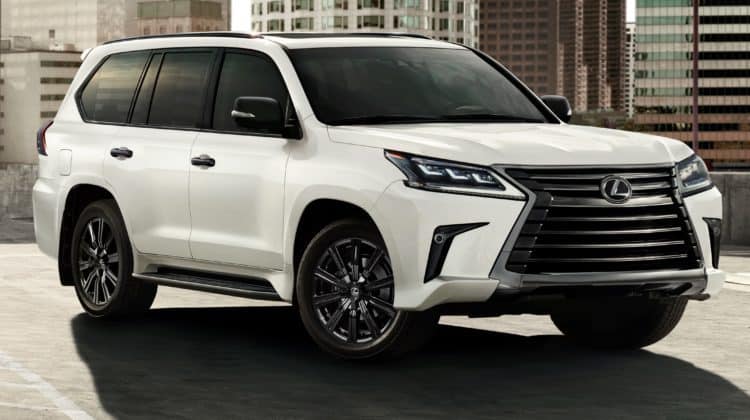 We don’t blame you for calling the 2021 Lexus LX 570 a dinosaur because it is. This big SUV has seen two facelifts during its current generation, which first appeared as a 2008 model. The most recent one gave the LX, Lexus’  latest corporate look complete with a massive spindle grille and angular new LED headlights. Like the brand’s most recent models, the second refresh for the LX added so many angles there are creases across its face and rear end. As a result, you’re not going to mistake in for anything else on the road. Like before, the Lexus LX is essentially a more luxurious Toyota Land Cruiser, meaning it’s just as capable and will be one of a the few luxury SUVs that won’t have a problem getting dirty.

Getting inside the 2021 Lexus LX 570, you’ll find up to three rows of seating. The truck-like seating position is more akin to SUVs of yore instead of the car-like crossovers of today. Stadium-style seating means the second row is slightly raised but will easily accommodate three adults. Keep the third row to kids because they’re tight and also intrude into cargo space because they fold to the side. The Lexus Safety System+ driver assistance suite is standard along with blind-spot monitoring and rear cross-traffic alert. Unfortunately, the LX still has the older user interface, meaning you need to use the dreaded mouse pad-like controls to interact with the main display and there’s no support for Apple CarPlay and Android Auto.

The Lexus LX 570 is powered by a 5.7-liter V8 with 383 hp and 401 lb-ft of torque. An eight-speed automatic is the only transmission available. To no one’s surprise, a vehicle this boxy and heavy isn’t very efficient at 12/16/14 mpg city/highway/combined. Unlike some of its competitors, the body-on-frame LX still uses a solid rear axle and a mechanical center differential that can send power accordingly to both axles, and a two-speed transfer case with a true low-ratio mode.

Due to its three-ton curb weight and less aggressive powertrain calibration, the LX isn’t as quick as some of its key competitors. You don’t get instant acceleration but you’re not struggling either; at least it also comes with a nice V8 growl. Don’t expect the Lexus LX to shrink around you because it drives as big as it looks. The SUV’s electro hydraulic suspension gets all the credit for the LX’s supremely comfortable ride without sacrificing its off-road prowess. Great sound insulation keeps things isolated even on the highway.

If you’re looking for a luxury SUV that can also go off the beaten path confidently, the 2021 Lexus LX 570. Yes, it’s dated but no other vehicle in its class is as capable without spending an arm and a leg for a Mercedes-Benz G-Class. Between that and Lexus’ reputation for reliability and durability, there’s still a lot to like with the LX 570. With the loss of the Toyota Land Cruiser, the Lexus LX will be the only way to get that car’s legendary heritage and capability in the future. Only this time, you’re getting a much nicer interior for the same amount of money as you paid for that Toyota.