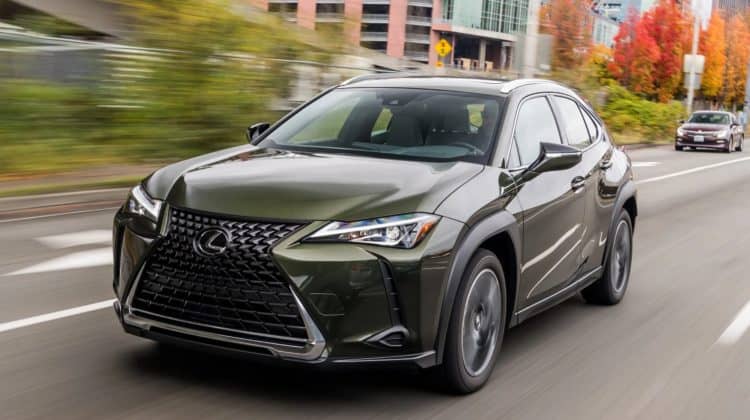 The 2021 Lexus UX may be marketed as a crossover but it’s best to think of it more as a hatchback. Its exterior dimensions are similar to one and it definitely looks like one too despite the body cladding. When you get up close to a UX you’ll immediately notice just how small it is, especially when seen from the side, and you won’t mistake it for anything but a Lexus. The brand’s spindle grille adorns the front end and you get angular headlights to go with them. In the rear, you’ll find full-width LED taillights complete with cool shark fins as a nod to past car designs.

Get inside the 2021 Lexus UX and you’ll find an intimate cabin that can seat two comfortably. Four will be fine in a pinch but we don’t recommend sitting back there for more a quick lunch run. The UX’s small cabin comes into focus when you look at the cargo space. It’s not very accommodating regardless of whether you have the rear seats up or down due to the rear window’s angle. There aren’t many useful storage cubbies either. Even the mobile device tray can’t hold modern smartphones. The UX still has Lexus’s touchpad-based infotainment system with a standard 8.0- or optional 10.3-inch display. This isn’t the most user-friendly interface due to the touchpad’s inconsistent responses. The U.S. also doesn’t get the Mark Levinson audio system that global market UX models get; instead, we only get a six- or eight-speaker unit. At least the build quality is on par with Lexus standards meaning you get lots of soft-touch materials and padded surfaces near areas you frequently interact with.

The base Lexus UX 200 uses a 2.0-liter four-cylinder with 169 hp and 151 lb-ft of torque. A CVT with a physical first gear is the only transmission offered. If you’re looking for more power or AWD, you need to move up to the UX 250h, which uses the same engine and pairs it with two electric drive motors, a planetary gear set, and a battery for a combined output of 181 hp. The EPA rates the UX 200 at 29/37/32 mpg city/highway combined. UX 250h models are good for 41/38/39 mpg. Regardless of which model you get, don’t expect a thrilling acceleration because neither have as much power as the European competitors. You will, however, get a nice ride and handling balance; the UX drives better than you’d expect thanks to its chassis tuning and small size, further adding to its hatchback-like demeanor. Yes, you’ll find more potent performance variants from European rivals but you’re paying way more for those. The F Sport suspension gives you slightly tighter handling but it will hurt the ride a little.

If there’s one thing holding the 2021 Lexus UX back it would be the lack of power. Neither version is very powerful and it could benefit greatly from the additional grunt, especially when you consider just how well it handles without sacrificing ride comfort too much. The lack of space also takes the UX out of contention for families but if you’re single or a couple, this could remain viable for you especially if you live in an urban area. In short, the Lexus UX is just one power boost away from greatness and standing out in a competitive segment.