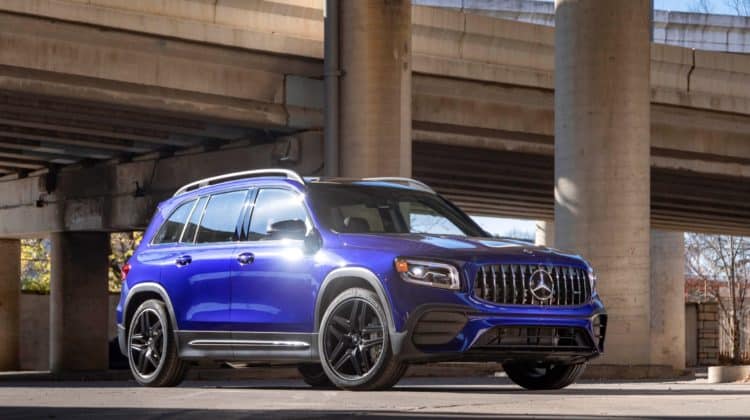 Think of the Mercedes-AMG GLB 35 as a hot hatch in disguise. With a 302-hp 2.0-liter turbo-four, a performance-tuned AWD system, and an eight-speed dual-clutch automatic transmission, this boxy small crossover has the power to get you going in a jiffy. Mercedes also revised the chassis to help improve its handling. Adaptive dampers are standard to give you three levels of suspension stiffness while the AMG sports exhaust lets you choose how loud the car gets.

Unlike your conventional performance compact car or hot hatch, the GLB 35 is more grown-up. Yes, it’s firmer but it’s also a smidge more comfortable than its sedan counterparts thanks to more suspension travel. However, keep in mind that the GLB 35 still won’t be as cushy as less potent versions and competitors that don’t have performance-oriented variants. This boxy little rig is about going fast after all and all of that zippiness and handing chops will come at the cost of a little compliance.

Like the standard GLB-Class models, the GLB 35 is available in a three-row layout, making it one of the few small crossovers with seating for up to seven. Keep in mind that the third row is only for emergency use because it’s quite cramped back there even for average-sized adults. This gives the GLB 35 additional versatility because it gives you more cargo capacity when you need it or extra jump seats in case you get some extra people who want to carpool for a short drive. Should you find the standard front seats to not hold you in place well enough, the Mercedes-AMG GLB 35 is available with AMG front bucket seats with fixed headrests and more bolstering. Just make sure you’re fine with their stiffness and the fact that their cushioning is a little harder than your average seat.

Despite being an entry-level model, the Mercedes-Benz GLB-Class is available with the MBUX interface. The GLB 35 gets the larger dual 10.3-inch display layout as standard. In typical Mercedes fashion, the system has multiple ways to control the system including a touchpad, the main touchscreen, and a black pad on the right spoke of the steering wheel. Other cool features include 64-color interior ambient lighting, augmented reality navigation assistance, heated and ventilated front seats, and a Burmester audio system. Apple CarPlay and Android Auto are standard but in cars with larger screens, they only take up a portion of screen real estate.

If you’ve decided that you want a Mercedes-AMG GLB 35, you may want to keep the options in check. Go wild and you’ll likely end up with a boxy 302-hp crossover that costs over $60,000. That’s going to be hard because so many crucial driver assists that are standard on many mainstream cars are optional on the GLB. Additionally, getting them requires that you get another package, further bumping the sticker price up.

Should you be looking for more power, there’s news around that a GLB 45 is coming. Like the GLA 45 and CLA 45, that variant will use a 382-hp 2.0-liter turbo-four, meaning it’ll be one of the quickest subcompact crossovers available. Expect the ride to get even stiffer despite the standard adaptive dampers as AMG will likely tune the GLB 45’s suspension for full attack mode and track work.