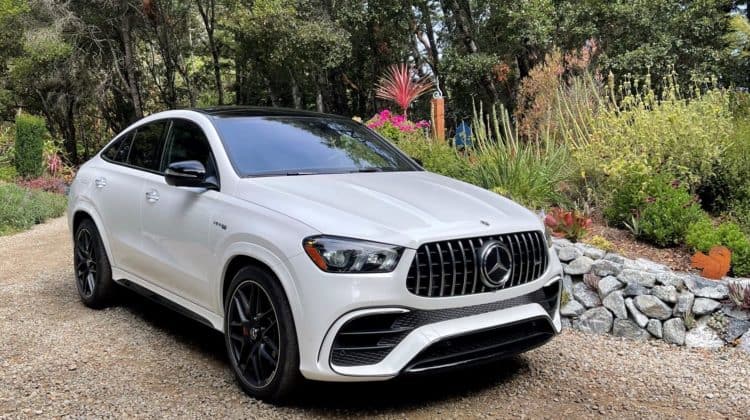 The 2021 Mercedes-AMG GLE 63 S Coupe is marketed as a high-performance crossover but is it really? Take a closer look because if you think hard enough, this rig is just a tall sedan with a hatch instead of a trunk. If you view the GLE Coupe that way, it starts to make sense because what we’re seeing is the reinvention of the typical four-door sedan as we know it. Although it won’t handling as well as the E63 sedan, the GLE will do just about everything better than its sedan counterpart.

According to Mercedes, the GLE outsells the E-Class by a significant margin, which is no surprise. This crossover has broader appeal and more presence, especially in the performance flavors. The 2021 Mercedes-AMG GLE 63 S Coupe, in particular, looks imposing, especially with those large lower air intakes and massive Panamericana grille complete with a massive three-pointed star. In typical crossover coupe fashion, there are three too many doors and a low roofline that give it the raised sedan-like look. You get clean full LED taillights in the rear along with square quad exhaust tips.

Get inside the GLE 63 S and you’ll find Mercedes’ latest interior design featuring two massive displays on the dash. Due to the low-slung roofline, the GLE Coupe isn’t as practical as the standard GLE SUV but it’s definitely more useful than an E-Class sedan. However, keep in mind that you’ll also need to deal with more blind spots for that stylish look. The MBUX interface is standard and while it’s quite advanced, some consumers may find it too complicated. Headroom is less than the regular GLE in the rear because of that sexy roofline but more than an E-Class. While it’s wider than the E-Class, the middle seat is still best left for children.

Since the “Coupe” version of the GLE is the designated sporty version, it’s available only in AMG flavors. This GLE 63 S tester uses a 4.0-liter twin-turbo V8 with 602 hp and 627 lb-ft of torque. The only transmission is a nine-speed automatic. It also gets Mercedes’ EQ Boost 48-volt mild-hybrid system, which fills in 21 hp and 184 lb-ft during certain driving conditions. EPA fuel economy rating is 15/18/17 mpg city/highway/combined. As a result, you get incredible performance out of the GLE 63 S Coupe. Despite its massive size and near 5,400-pound curb weight, the car accelerates with authority thanks to the twin-turbo V8. The handling is equally crazy because of the meaty tires and AMG-tuned air suspension, making it an absolute blast. However, the GLE’s size becomes most apparent on narrow roads. It also has a more grown-up feel, meaning it’s more livable on a day-to-day basis. Yes, it’s stiffer than the standard model but not the point that it’s crushing your kidneys thanks to the air suspension and adaptive dampers. Surprisingly, the GLE 63 S is incredibly quiet with the optional extra sound insulation.

To put it simply, the 2021 Mercedes-AMG GLE 63 S Coupe does things that a vehicle of its size has no right to do. However, because of its extra weight, it’ll never drive like an E63. It will give you more daily usability and civility in exchange for the loss in agility and overall potency. If that’s a worthy trade-off for you, then this vehicle should be on your shopping list, especially if you’re looking for what’s essentially Mercedes’ take on new age super sedan.