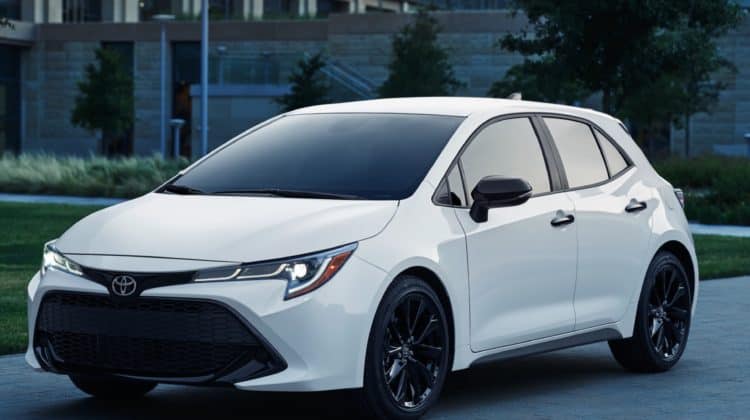 The 2021 Toyota Corolla isn’t exactly best known for fun. Yes, it sells in massive numbers but its popularity stems from it being incredibly reliable and easy to live with. This current generation Corolla sees Toyota working to change the way you think of its popular compact car especially with a sporty-looking hatchback.

Alex’s test vehicle is the 2021 Toyota Corolla hatchback Nightshade Edition. That means you get the blacked-out treatment inside and out. The exterior gets black 18-inch alloy wheels, black lower grille surrounds, black badges, a black roof spoiler, and black headlight inserts. Based on the SE grade, the Corolla Nightshade Edition is well equipped with features like an 8.0-inch touchscreen, Apple CarPlay, and Android Auto compatibility, LED headlights, and the full Toyota Safety Sense 2.0 suite of driver assistance features. Unfortunately, Toyota’s user interface isn’t the most modern; it’s slow to respond and the graphics are dated.

Toyota created clear distinctions between the Corolla hatchback and sedan. Both have a hungry grille but the hatch doesn’t expand out in any trim the way it does in the SE and XSE sedan. The taillights in the hatch are also thinner, mimicking the headlights more closely.

The Corolla is one of the last remaining true compact cars. While most of its competitors have grown a lot, the Corolla has kept its dimensions in check. As a result, its interior isn’t as roomy as you’d expect. There’s room for four but it’s best to keep it to two or three on longer drives. The trunk isn’t as spacious either; you don’t have much room to work with when the rear seats are up, meaning you’ll need to keep them down if you haul bulky items often (or use another vehicle).  The dash also eats into overall space and feels like it’s pushing into the front occupants’ personal space. Additional sound-deadening would also help because the Corolla’s cabin gets quite noisy on the highway.

Powering the Corolla Nightshade Edition is a 2.0-liter four-cylinder with 169 hp and 151 lb-ft of torque. You can get a six-speed manual on the SE and XSE models but the Nightshade is only available with the CVT. This particular Toyota CVT uses a physical first gear before transitioning to the belt and pulley, giving it the feel that’s closer to a conventional automatic. In Sport mode, the transmission mimics ten “gears.” However, you’ll need to rev that 2.0-liter out to get the most of it because it doesn’t make much low- to mid-range power. At least the fuel economy is stellar; the EPA rates the Nightshade Edition at 32/41/35 mpg city/highway/combined.

On the road, this latest Corolla drives with a bit more verve than before. While it’s not as quick as it looks might suggest, it handles quite well for an economy-minded compact car. Credit Toyota’s TNGA-C platform and an independent suspension on all four corners for the Corolla’s newfound moves. It steers well, too, giving you a more connected driving experience. Luckily, ride quality doesn’t take a hit, meaning the car remains compliant and viable as your daily driver.

Although the 2021 Toyota Corolla is better to drive than before, you have to make some compromises because of its size. It’s not the roomiest car and its infotainment system is dated. Thankfully, it kept most of its virtues including Toyota’s strong reputation for reliability, efficiency, and a compliant ride. Only this time, you get a more stylish daily driver that stands out more, especially in the Nightshade Edition. In short, if you’re not ready to jump into the crossover craze, the Corolla is a compelling option.