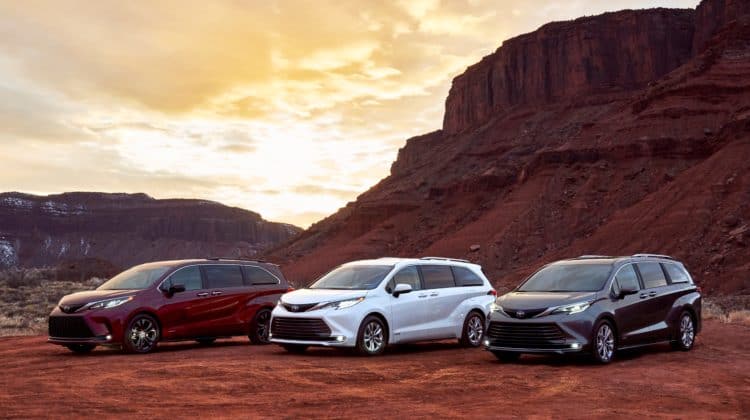 If you’re looking for a three-row vehicle that isn’t a crossover and electrified, you’ve got two choices: this 2021 Toyota Sienna and the 2021 Chrysler Pacifica Hybrid. The 2021 Toyota Sienna has gone all hybrid and it’s the only minivan that’s available with AWD and electrification all in one package. Now sporting Toyota’s latest design language, you get the same angular mug complete with the hungry grille and angular headlight clusters. Despite its upright greenhouse, the Sienna remains distinctive thanks to all of the angles. That continues in the rear thanks to taillights reminiscent of the ones found in the Camry and what appears to be a duckbill.

The 2021 Toyota Sienna gets several neat features to make family life easier. Some trims get hands-free power sliding doors and liftgate, a third row that drops into a tub to create a flat load floor, two 1,500-watt inverter ports, and a big cubby under the center console. Unfortunately, the second row is no longer removable because Toyota has mounted the airbags on the seats. At least Toyota kept all the storage cubbies including a massive tray on the dash, several bottle holders, and a deep center console bin.

All 2021 Siennas get the Toyota Safety Sense 2.0 suite as standard. The infotainment system features a 9.0-inch touchscreen and you can also get a JBL audio system and a rear-seat entertainment system.

Powering the 2021 Toyota Sienna is the familiar 2.5-liter-based hybrid system, which includes a 1.9-kWh battery, a planetary gear set, and two electric drive motors. The total system output is 245 hp. In FWD guise, the Sienna gets 36 mpg across the board while AWD models are rated at 35/36/35 mpg city/highway/combined. Unlike the previous Sienna, the latest version doesn’t use a mechanical AWD system. Instead, a second electric drive motor is mounted on the rear axle to add traction back there.

The drop in power means the Sienna isn’t that quick. However, thanks to the electric motors, it never feels out of breath even when loaded up with people and gear. Thanks to the battery being placed under the first two rows, the Sienna’s center of gravity is quite low. As a result, you get respectable handling for a vehicle of its size and slightly less body roll than your average three-row crossover. You also get a comfortable ride thanks to its softer suspension calibration. For the most part, the Sienna stays relatively quiet even at highway speeds, adding to its comfort-oriented demeanor.

For most people, the 2021 Toyota Sienna may just be the ideal family hauler, especially if you’re crossover averse and need three rows. The Sienna is also the only minivan with an electrified powertrain and AWD available, further making it more appealing. Although it’s no longer one of the quickest in its segment, Toyota makes up for it in fuel economy, making it one of the most efficient three-row vehicles. If you’re fine with the lower power ratings, the Sienna is a compelling option, especially if you don’t need the second row to come out of the car or fold down into a tub.