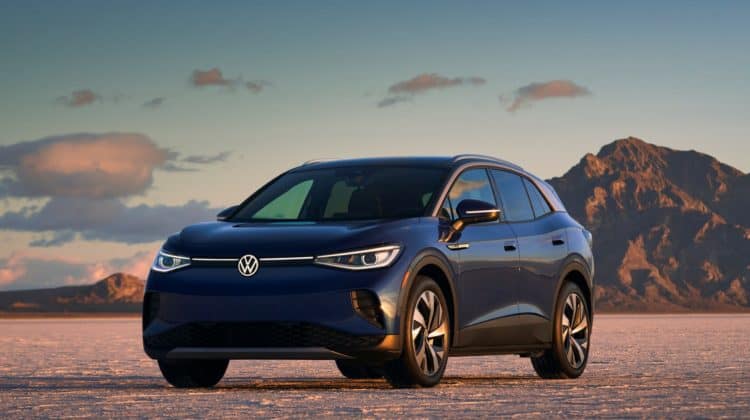 The 2021 Volkswagen ID.4 is the first all-electric model on the brand’s MEB platform, which was developed specifically for EVs. Volkswagen also wants you to look at this model as an alternative to the Toyota RAV4 and Honda CR-V. As a result, it looks like your typical compact crossover. It’s got an upright greenhouse to maximize interior space. However, you won’t mistake the ID.4 for anything but a Volkswagen because it has the family loo, only this time it’s applied to EVs. You get LED headlights in front and full-width LED taillights in the rear that mimic the same pattern.

Once you go inside the 2021 Volkswagen ID.4, you’ll find a spacious cabin for four or five and a crazy minimalist design theme. You’ll also find plenty of clever storage solutions like the reconfigurable center console, which has removable dividers and cupholders. You get a 10.0- or 12.0-inch main touchscreen and a 5.3-inch gauge cluster display. Unfortunately, Volkswagen’s new interface isn’t the most intuitive system to use because there are next to no knobs and physical buttons. Everything is haptic feedback and buried under at least 3 layers of submenus, making it distracting to use. Additionally, certain functions aren’t where they’re usually located, adding to the overall learning curve. At least the materials are solid and the cabin is fairly quiet.

Charging the ID.4’s 82-kWh battery takes 38 minutes (from 5 to 80 percent) at peak rates of 125 kW. A level 2 or 240-volt AC charger will get you a full charger in just over 7 hours. Every ID.4 purchase also includes three years of complimentary DC charging at Electrify America stations. The single-motor version has 201 hp and 229 lb-ft of torque. A dual-motor version with 295 hp combined will arrive in late 2021 but will have less range at 249 miles per charge on the Pro trim or 240 miles in the Pro S. The single-motor version is good for 260 miles in the Pro grade or 250 miles in the First Edition or Pro S variants. In our range test, the Volkswagen ID.4 was able to hit 244 miles on a single charge with Alex pulling up to a charging station at exactly zero percent.

In terms of performance, the Volkswagen ID.4 land smack dab in the middle of the compact car segment. It’s got enough power to move you without struggling but it won’t thrill you either. Why? It’s tuned for smoothness rather than outright performance, giving it a more civilized feel on the road. The battery placement under the passenger compartment gives the ID.4  confident road manners, allowing it to handle better than you’d expect for a crossover that weighs nearly 4,700 pounds. You don’t lose out on ride comfort either because it’s incredibly compliant even on rough roads. The tight turning circle also makes the crossover quite maneuverable, making it a great choice for city dwellers.

In short, the 2021 Volkswagen ID.4 feels like a normal crossover with some futuristic touches. It’s practical, comfortable, and roomy, making it a great choice for family duty. As a result, the ID.4 is a compelling EV for the first-time owner because it’s so easy to integrate into your life. The lower starting price, three years of free charging at Electrify America, and narrower price range, even with the AWD version included, also adds to its appeal.