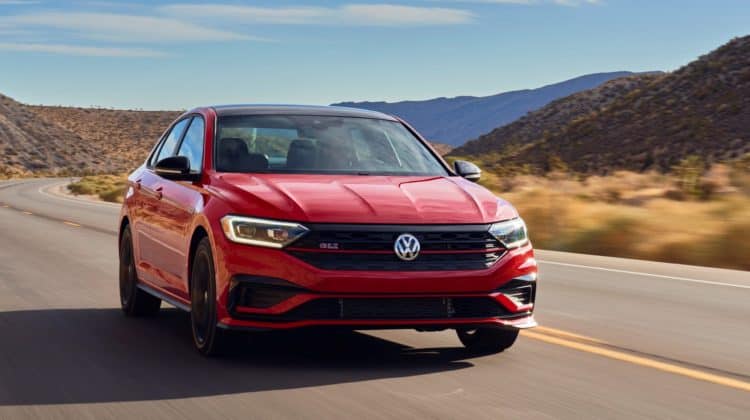 The Volkswagen Jetta GLI once played second fiddle to the much more beloved Golf GTI. Before, you’d notice the differences between the two because it was so obvious that the one with the trunk wasn’t as fully fleshed out as its legendary hot hatch sibling.

That changes for this generation because the Jetta GLI is essentially a sedan version of the (soon to be replaced) Golf GTI. Under the hood is the same 2.0-liter turbo-four making 228 hp and 258 lb-ft of torque, and you can pair it to either a six-speed manual or a seven-speed dual-clutch automatic. The tweaks made to the suspension are quite significant, too, because the Jetta GLI now gets the same goods as the GTI. That means you can now get adaptive dampers and an electronically-controlled limited-slip differential, both of which should make this sports sedan a riot to drive.

Despite its compact car designation, the Volkswagen Jetta GLI is surprisingly practical thanks to its well-packaged interior. The cabin can easily fit four passengers and has almost the same interior volume as a midsize sedan. Trunk space is incredibly large by compact sedan standards, which adds to the Jetta GLI’s practicality.
Just like its hatchback sibling, the Jetta GLI gets you a lot of creature comforts. Heated and ventilated front seats, interior ambient lighting, leather upholstery, a Beats audio system, and a digital gauge cluster are all available in the Jetta GLI. There are also lots of driver assists available including lane-keeping assist and adaptive cruise control, which should make this sport sedan more appealing for people with longer commutes and those that want a car to fill multiple shoes.

The Volkswagen Jetta GLI puts balance ahead of outright performance. Yes, it’s still highly capable but you won’t mistake this for a competitor to the likes of the Subaru WRX and WRX STI. As a result, the car is well-rounded and more refined than your average sports sedan, meaning it can easily work as your daily driver on the weekdays, weekend fun machine, and occasional road trip vehicle.

If its ability to do multiple things well doesn’t impress you, the Volkswagen Jetta GLI’s price will tempt you. For under $35,000, you get a multi-talented sports sedan that punches above its weight and gives you a lot of car for the money regardless of which transmission you choose. The best part is you get so many cool features once reserved for expensive luxury cars on the highest trim of the Jetta GLI yet it still costs around $32,000 before adding dealer-installed accessories. That alone makes this car a steal. Although it does cost more than key rivals like the Hyundai Elantra N Line, Kia Forte GT, and Honda Civic Si, the extra money you fork over gives you way more performance potential thanks to the more powerful engine and more extensive chassis tweaks.

Sadly, the Jetta GLI may end up playing second fiddle to the Golf GTI again. With the imminent arrival of the eighth-generation Golf GTI imminent, the iconic hot hatch may have the edge once again. Until the Jetta GLI gets updated for its next iteration, that is.