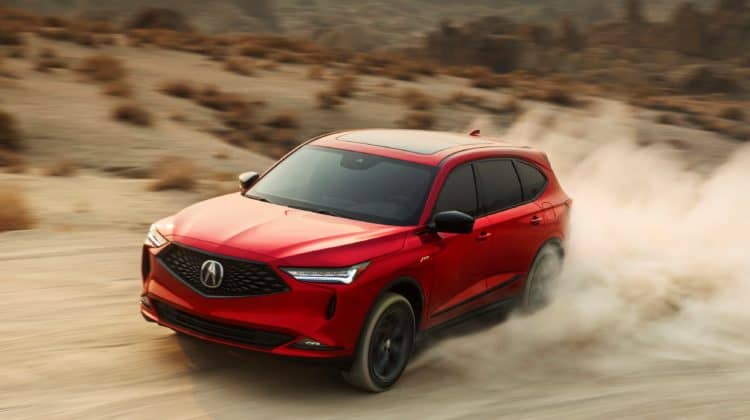 The 2022 Acura MDX may just be the best luxury crossover that starts under $60,000. Why? Because it does so many things well yet offers such a strong value. Acura’s new look is more attractive and it’s most apparent in the MDX. Although it’s evolutionary, the crossover’s new face is less polarizing than before even with that new diamond-shaped grille and thin LED headlights. In terms of size, the new MDX is about the same size as its predecessor even with the raked A-pillar and long hood. Despite its new proportions and fresh platform, this crossover is still FWD-based. the rounded front gives it the illusion that it’s longer than it actually is, especially when viewed from the side. The rear end shows its family relation to the second-generation TLX thanks to its taillights featuring the same LED accent strips and dual exhaust tips.

The crossover also benefits from Acura’s latest front seats which are supremely comfortable and offer the same levels of adjustments and soon a massage feature. Acura added a neat trick in the second row with the removable center position. That means if you want captain’s chairs or easier third-row access you can easily remove the center position when needed while still retaining the ability to carry seven passengers if needed. Passengers relegated to the third row will be comfortable only for short trips because it’s not very roomy back there but still more usable than the one found in the Lexus RX L. Keep the third row folded for maximum cargo space because there isn’t much with all seats up. There is an underfloor storage area for added flexibility.

If you’re looking for a three-row crossover that drives and rides well, the MDX is it. Together with wide tires, a torque-vectoring rear axle, and AWD, this three-row can hustle through your favorite road and carve up corners confidently without feeling it’s about to get out of control. The MDX’s sportier bend is most apparent in the ride quality department because it’s tighter and isn’t as soft as competitors like the Lexus RX.

In its class, the 2022 Acura MDX is one of the most well-rounded options. Thanks to its sportier character, the MDX is now one of the best-driving entries yet it somehow manages to remain fairly comfortable. With the nine-speed automatic gone and a 355-hp Type S version just around the corner, the MDX appears to have nearly all bases covered. Now if only Acura would bring back the hybrid variant then it would have a complete lineup with something for everyone.