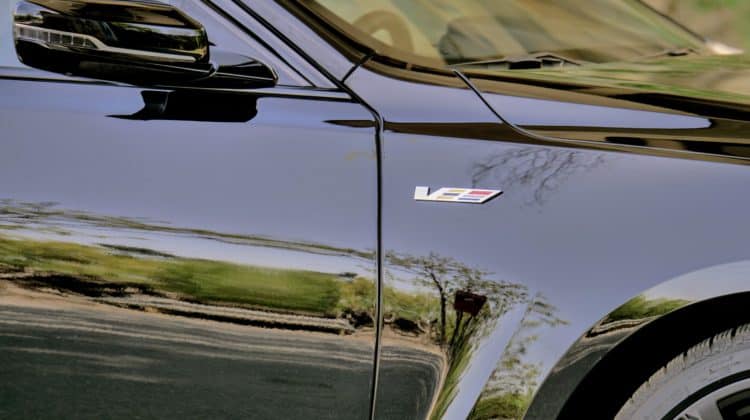 The 2022 Cadillac CT5-V Blackwing. A fantastic muscle car with four doors, a dash of luxury and a sinister aura. It doesn’t sing in the same tune as competitors like the Mercedes-AMG C63 or BMW M3. That’s all by design, of course. With a 6.2L supercharged V8, rear-wheel drive and a manual transmission, there really isn’t anything else quite like it on the road today. A Dodge Charger won’t let you row your own gears, nor will most of the German competition. BMW does give you the option in the standard M3, but that car is running a 6-cylinder engine. With the next crop of AMG 63 models turning into hybridized 4-cylinder turbos, it stands to reason that the CT5-V Blackwing is now the best representation of old-school four-door performance money can buy. 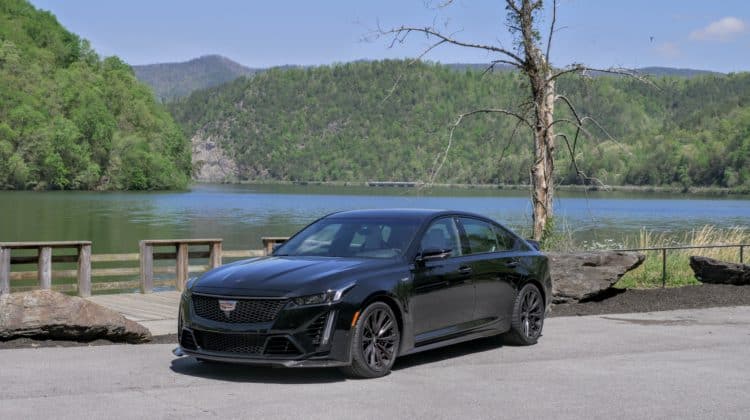 The model I had for the week was, honestly, too stealthy for its own good. The Black Raven paint and two (yes, two) carbon fiber packages totaling $9,330 gave it a somewhat unassuming character. I would have preferred Electric Blue or Blaze Orange, colors that truly represent the cacophonous soul this car exudes. Visually, the Blackwing builds on the standard CT5-V with wider fenders and air intakes, a different front fascia and more aggressive side sills. Even with the extra goodies, I can’t help but see a Dr. Seuss fish when looking at this car in any trim. Whether it’s the way the front vertical LEDs meld with the curvature of the side profile, I’m not sure. That’s just what I see. Ultimately, I think the previous CTS-V had a more cohesive and elegant design.

Thankfully, the black paint hides the unfortunate fake third window area, which just consists of glossy black plastic trim. In the aforementioned brighter colors, it stands out more but just doesn’t look right to me. The last time an automaker committed such an offense was when Toyota refreshed the 2015 Camry to make it look more like the Avalon at the time. There is hope, however, in the form of a potential heavy mid-cycle refresh. What looks to be CT5 prototypes have been spotted testing with real glass in this same area. One can hope that really is the case and that the change will be applied to all CT5s eventually. 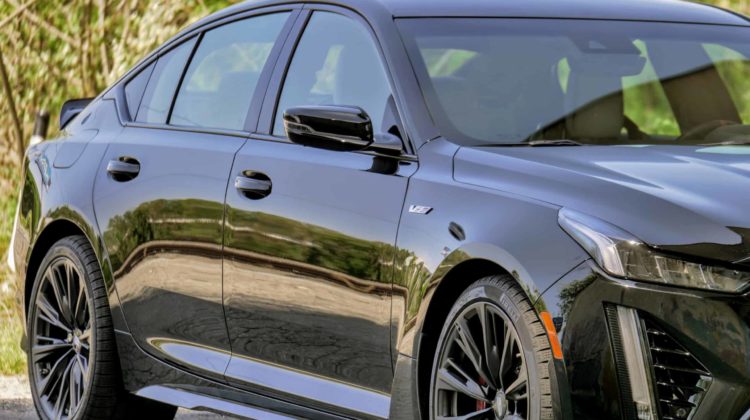 The interior of the 2022 CT5-V Blackwing was a high point for me. No, it didn’t have the fanciest assortment of material choices for the price, especially if you took the time to scrutinize its dashboard. There was a liberal use of micro-fiber suede on the headliner, which visually improved things for sure. Where the interior shined was in its ability to feel sporty, driver-oriented and comfortable all at the same time. The aggressive front seats came in the lovely ‘Sky Cool Grey’ color but had plenty of adjustability, so you shouldn’t have a difficult time getting situated if you are of average build. Mine were trimmed in regular leather, but if you upgrade to semi-aniline, the two-tone color scheme actually inverts (grey on bolsters, black in center). They didn’t have full-on massaging per se, but there is a Mercedes-style ergonomics mode that continuously adjusts the lumbar and bolstering to reduce fatigue. They also had GM’s Safety Alert feature, which vibrates your rump when you’re slipping out of your lane or getting too close to other objects on the road. Certainly a unique take on this technology! 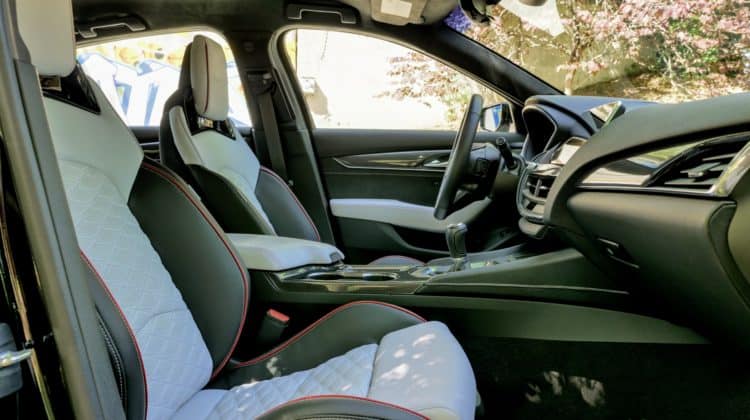 All Blackwing models have a full LCD instrument cluster with engine gauges on the left and numerous pages of info to shuffle through on the right. It has three themes – Touring, Sport and Track. I found the Sport view to be the best if you have the manual transmission thanks to the large and vibrant tachometer placed front and center. The steering wheel was the perfect size and felt good in my hands. My only problem with it was the layout of the buttons. I did not like how I had to contort my thumb to press the seek/track buttons for audio. What I did enjoy was the ‘V’ button, which puts the car immediately into all of the most hard core dynamics settings. The main infotainment screen will pull up all of the variables and allow you to further adjust them, but that’s what My Mode is for. Press V if you want to turn the car into a race car on the spot.

The infotainment system runs the latest iteration of Cadillac User Experience, or CUE. It is far and away the best system I have used in any car I have tested so far this year. Wireless smartphone integration was flawless, I never even had to think about it. The wireless charging pad fit my massive Google Pixel 6 Pro like it was nothing, and actually kept the phone charged while running Android Auto on a three hour drive. Android Auto never experienced a single hiccup, but I can’t speak for Apple CarPlay. The physical buttons below the screen were a perfect distance away, the volume knob, too. Next to that was a dial that allows you to control the touchscreen, but I never found myself using it. The screen was fast and responsive enough. 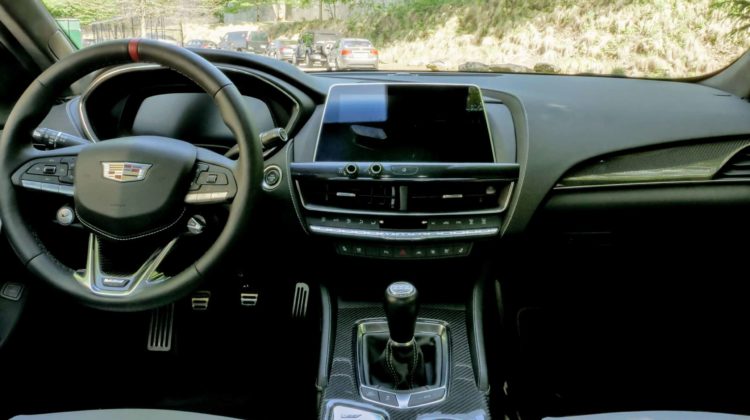 Passenger room exceeded expectations for my average build. In fact, the rear seat was on the more spacious side for vehicles in this class. Keep in mind that the CT5 is something of a tweener car. It straddles the line between Mercedes C-Class and E-Class, but its rear seat felt much more like the E-Class. I could definitely sit back there and be comfortable for a long road trip, which was quite impressive.

Now for what you came here for. The 2022 Cadillac CT5-V Blackwing has an incredible powertrain. You can get it with a 10-speed automatic or the 6-speed manual I was driving. If you can drive a stick and you are looking for a car in this category, you would be foolish not to spring for the manual. The excuse that manuals aren’t fit for city dwellers is no longer valid thanks to the rev-matched downshifts. The system works just as well as it does in other cars that have it today. The clutch pedal is a little on the firm side, but that is to be expected and will become second nature over time. The shifter is extremely mechanical with its movement and the vibrations from the engine and road surfaces channel straight through it to visually remind you of the monster you’re driving. You can flat-foot shift it, but I did not get a chance to try it.

The magic happens when that LT4 6.2L V8 turns on. It makes a menacing growl that competitive motors simply cannot match. Being a luxury car, it is definitely louder on the outside than it is on the inside, however. Having 668 horsepower and 659 lb.-ft. of torque means that no matter what gear you are in, the car is ready to pounce. Acceleration is explosive and maniacal, with the transmission actually becoming easier to shift when you are pushing the car. It is really eye-opening to see the car go so easily from a tango partner to a fiery salsa dancer. Red line is nearly 7,000 rpm and the car is very willing to take you there if you feel so inclined.

In case you didn’t know, the LT4 in the CT5-V Blackwing is actually not the original ‘Blackwing’ engine. That would be the 4.2L twin-turbo V8 from the now-deceased CT6-V. It was a little less powerful but a good bit more fuel efficient, which is an area this car doesn’t necessarily need to focus on, but is worth mentioning. Around town I was seeing 9 mpg, but closer to 18 on the highway. Yikes. 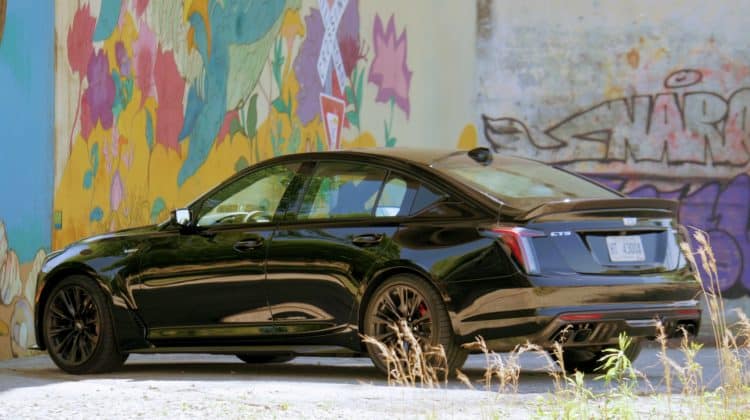 How Does It Drive?

To see how it drives in its natural habitat, I took the car to the Tail of the Dragon, a famous driving road in the mountains of North Carolina. With only rear-wheel drive on offer, the CT5-V Blackwing will give you dinner and a show when accelerating from a stop. The rear tires have to fight to hold onto the pavement for a few seconds, but once they hook, you’re going places. That RWD dynamic sets this car apart from German rivals who have chosen performance AWD systems in order to increase off-the-line grip. While that certainly helps with 0-60 times, I couldn’t help but feel like I preferred the rambunctious nature of this setup more. 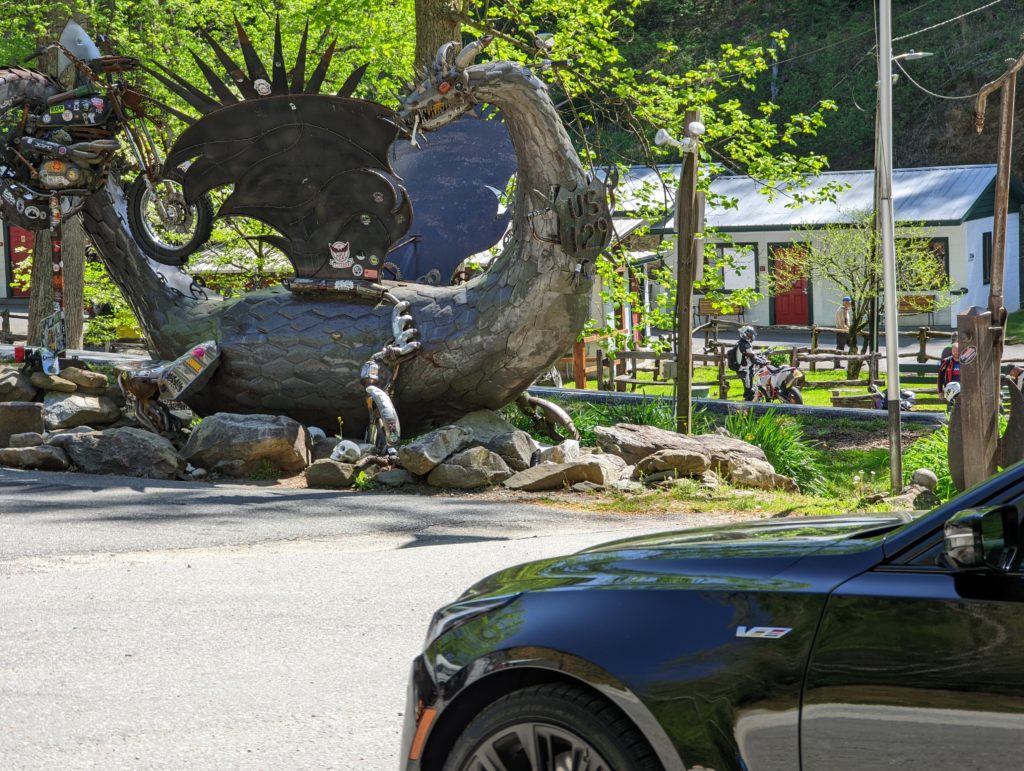 Even in its sportiest settings, the ride quality never compromised comfort. The Magnetic Ride Control and adaptive dampers did a great job at making the car appropriately firm while still absorbing road roughness with ease. This is not a lightweight vehicle by any means, but it still felt balanced and playful on the tight turns of the Dragon. Its handling was essentially limitless, but the rear end was always ready to do a number and step out if you gave the engine a jab through a corner. I did not get the chance to try and drift the car or do doughnuts with it, but this should be one of the easiest vehicles in the world to do it in.

Cadillac also allows you to cycle through a bunch of Performance Traction settings such as Wet, Sport and Race. When pushing the car on the Dragon, I found that the nuances between each of the dry settings were not noticeable enough. I am sure a track would be a far better place to really experience how the settings change the dynamics, but I was driving on public roads all week. Steering was always excellent – direct, not too heavy, and graced with a decent amount of feedback from the road despite it being electrically assisted. 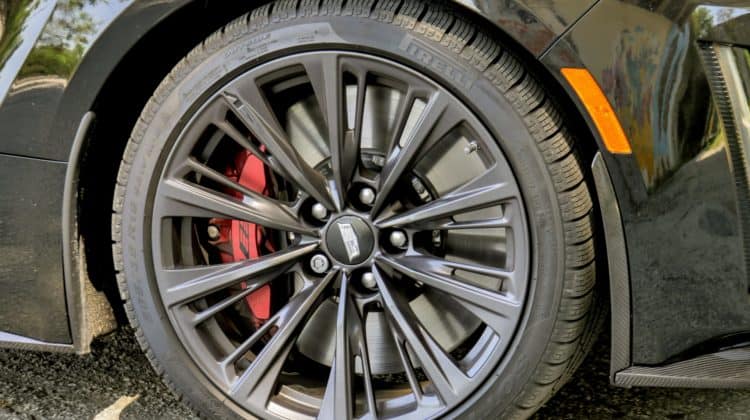 The only noteworthy letdown of the experience was the braking. My unit did not come with the optional $9,000 carbon ceramic brakes, which I began yearning for by the end of the week. It’s not that the standard brakes were bad, necessarily. They never felt unreliable or unable to confidently stop the car. I was simply looking for a sharper bite out of them, that’s all! 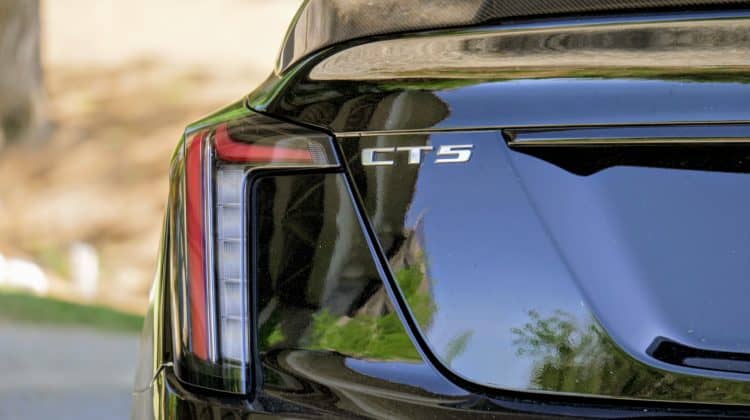 Cadillac wanted to go out with a bang for what it claims will be the last internal combustion V car (CT4-V as well). Not only did they create one of the most fun cars to drive out there, they did it 100% their way. Incredible V8 performance, sharp handling and a ride that is welcoming, not punishing. GM engineers made sure to sweat out the details that might pull buyers away from those AMG C63s or BMW M3s or even Charger Hellcats. This is such a special car that I honestly can’t think of a better way to spend around $100k right now. My tester came in right at the six digit mark with nearly every tech feature and all of the Cadillac luxury you could want from what is otherwise a hard-core, analog muscle car. The 2022 Cadillac CT5-V Blackwing is a fantastic value compared to its rivals, and will go down in history as one of my favorite cars ever.