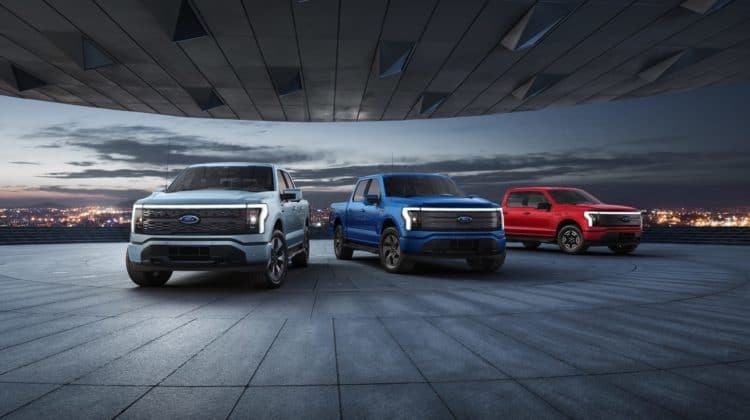 The 2022 Ford F-150 Lightning has arrived and it aims to change the truck landscape as the first of its kind. This battery-electric truck is the latest addition to the class-leading F-150 lineup, which already includes the fantastic hybrid variant. When it goes on sale next year, the F-150 Lightning will be available in commercial and consumer variants. They’ll be distinguishable from each other when it comes to exterior design.

Consumer-oriented versions of the 2022 Ford F-150 Lightning will start at $52,974 for the XLT variant. It will be eligible for a federal tax credit plus local and state incentives. In its most potent form, the 2022 F-150 Lightning will have  563 hp and 775 lb-ft of torque, which is more than any F-150 before it. Ford says this truck can hit 60 mph in 4.0 seconds flat, putting it in sports car territory when it comes to acceleration.

As with all battery-electric vehicles, the 2022 Ford F-150 Lightning’s b.attery is mounted as low as possible, improving the truck’s handling. Ford also enclosed the battery itself in a waterproof casing with lots of crash absorption protection. An improved cooling system has also been added to ensure the F-150 Lightning maintains its performance in harsh weather conditions.

Depending on the battery you choose, the F-150 Lightning is good for an EPA-estimated range of 230 miles for the standard unit or 300 miles with the extended range battery. Charging from 15 percent to 80 percent takes 41 minutes using a 150kW DC charger. The truck can also gain 54 miles of range in 10 minutes using the same charger.

Like the rest of the F-150 lineup, the 2022 Ford F-150 Lightning utilizes an aluminum body to cut weight without sacrificing rigidity. The Lightning is also the first F-150 to feature an independent rear suspension to help refine its ride and handling. The dual-motor layout effectively gives the F-150 Lightning AWD and it will have four selectable drive modes: Normal, Sport, Off-Road, and Tow/Haul. Generous amounts of underbody protection have been added to keep the battery protected.

Models with 18-inch alloy wheels can carry up to 2,000 pounds of payload while the XLT and Lariat variants equipped with the optional Max Trailer Tow package and extended range battery can tow up to 10,000 pounds. Since there’s no internal combustion engine, the F-150 Lightning has a front trunk, which Ford says should be able to accommodate 400 pounds of payload. There are also two USB ports plus four electric outlets generating 2.4 kW, enough for power tools and home appliances. The front trunk also has a drain plug, allowing it to double as a cooler. The truck also gets 7.2kW outlets in the bed and cabin. You can also use the F-150 Lightning as a backup generator for your house if you get one equipped with Ford Backup Power, allowing it to offload 9.6 kW of power.

You can distinguish the 2022 Ford F-150 Lightning from other F-150 models thanks to its grille-free look and a full LED light strip in front. In the rear, the truck gets a similar light treatment but is separated in the middle of the tailgate.

Ford plucked some interior bits from the Mustang Mach-E and gave them to the 2022 F-150 Lightning. The most prominent ones are the 15.5-inch touchscreen and the SYNC 4A user interface. You also get a 12.0-inch digital instrument cluster plus the integrated fold-out work table on the center console and the super comfortable Max Recline Seats.

When it goes on sale next year, the 2022 Ford F-150 Lightning will be available in four trims, two battery options at both commercial and consumer dealers.