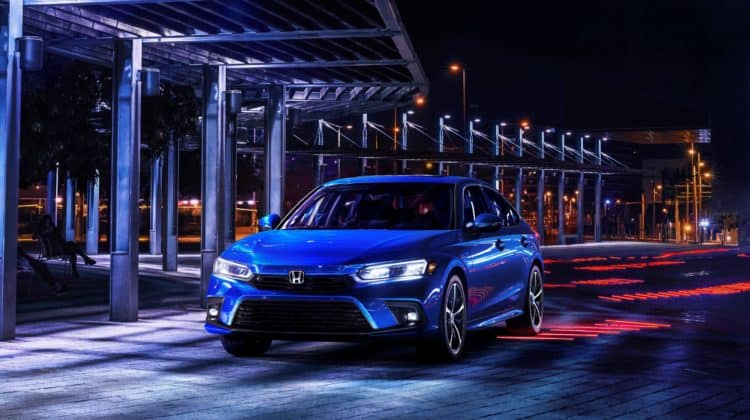 Honda has finally shown off the 2022 Civic sedan in all its glory and boy does it look like a miniature version of the Accord. That’s not a bad thing because the Accord is a handsome sedan in its own right. As for the 2022 Honda Civic, the new look adds more restraint yet keeps the car attractive with nice proportions and a low-slung roofline just like its predecessor. This time, it’s cleaner and less busy than before, which should help it age better. The greenhouse is more upright, which should improve visibility versus the outgoing car.

Moving inside, the 2022 Honda Civic’s interior is minimalist, featuring a horizontal layout. As with most new cars, the centerpiece is a free-standing main display that looks like a tablet embedded into the dash.  The controls appear pretty simple, too, featuring knobs and physical buttons along with either a 7.0- or 9.0-inch touchscreen, the latter of which is only available on the Touring trim. For the first time, the Civic will be available with a 10.2-inch digital gauge cluster but it’ll be limited to the range-topping Touring model. Lower grades get a partial unit with an analog speedometer. The Touring trim will also be offered with wireless Apple CarPlay and Android Auto compatibility while lesser variants get a wired version. A 12-speaker Bose audio system is only available on the Civic Touring.

The underpinnings of the 2022 Honda Civic carry over from the previous generation with significant updates. A stiffer body structure results in an 8 percent increase in torsional rigidity and a 13 percent improvement in bending rigidity. As a result, Honda claims that the Civic now has improved NVH because the body reduces the amount of road and wind noise.

A 1.4-inch longer wheelbase should help improve ride comfort while the retuned suspension should provide better handling thanks to a wider track, revised bushings, and a reworked power steering that promises better feedback and straight-line stability. An aluminum front subframe with a new rib structure and efficient truss add extra rigidity and stability. The result is 20 percent less harsh road shock when going over uneven surfaces, according to Honda.

Both four-cylinder engines carry over from the previous generation. That means the LX and Sport grades get a 2.0-liter with 158 hp and 138 lb-ft of torque. EX and Touring versions get a revised 1.5-liter turbo-four with 180hp and 177 lb-ft, an increase of 6 hp and 15 lb-ft. Both engines are paired exclusively to a CVT automatic. If you’re looking for a manual, you’re going to need to wait for the Civic Si or Civic Type R.

Every 2022 Civic will get the Honda Sensing driver assistance suite standard, which has been improved with the addition of traffic jam assist, front and rear false start prevention, and low-speed braking control. Honda has also added a proper blind-spot monitoring system and rear cross-traffic alert on certain Civic trims.

After the Civic sedan, Honda will follow with the hatchback, which will be built in North America for the first time at Honda’s Greensburg, Indiana facility. The Civic Si and Civic Type R will be the last two to join the lineup and we hope the former will finally be available in sedan or hatchback body styles.  However, don’t expect those two to get an automatic transmission anytime soon as Honda tends to keep hot Civics manual only.