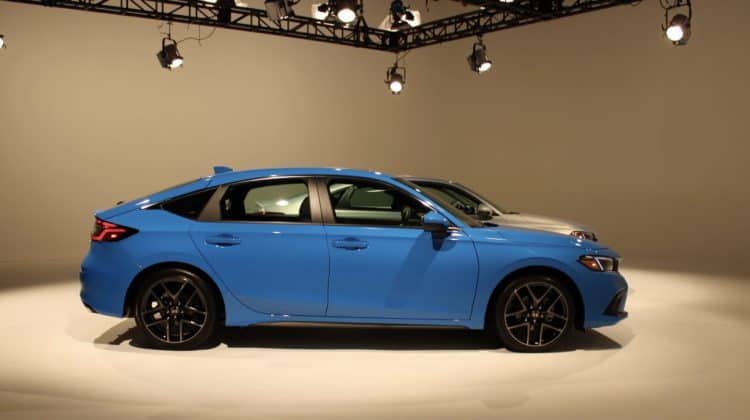 If you’re looking for practicality but don’t want a crossover, fear not because the 2022 Honda Civic hatchback has arrived. The second body style in the Civic lineup offers additional practicality and is one of the ways you can get a six-speed manual transmission. For the first time, the Civic hatchback will be built in the U.S. at Honda’s Greensburg, Indiana facility. Since its reintroduction in the outgoing generation, the hatchback has accounted for 20 percent of Civic sales in the U.S.

The 2022 Honda Civic hatchback continues the brand’s latest design language, which focuses on restraint for a more mature look. Honda says it took inspiration from European sportbacks or hatches with a liftback type layout, giving it a swoopy, less upright appearance versus a traditional two-box design. Versus the outgoing Civic hatchback, the 2022 model has a 1.4-inch longer wheelbase and its rear track is 0.5-inch wider. In terms of length, the Civic hatchback is 4.9 inches shorter than the sedan. Hatchback models also get a mesh grille with a concave shape and unique taillights with a high-mounted center light that spans nearly the entire hatch. Boost Blue Pearl and Smokey Mauve Pearl are two new available exterior colors on the Civic hatch. Sport and Sport Touring models are further distinguished by 18-inch alloy wheels finished in Berlina Black and Shark Gray respectively.

Inside, the Civic hatchback’s layout is virtually similar to the sedan. You get the same dash with a 7.0- or 9.0-inch touchscreen and an optional 10.2-inch digital gauge cluster. The 12-speaker Bose audio system and a wireless charger are also available on the Sport Touring grade. Every Civic hatchback gets the latest version of the Honda Sensing driver assistance suite, which now adds traffic jam assist and automatic emergency braking that works at parking lot speeds (Sport Touring only).

The main reason to get the Honda Civic hatchback over the sedan is practicality. Honda says that the liftgate is lighter than before because it’s made of new composite materials. The hinge mechanism has been moved outward, allowing for a 50-mm roof height reduction in that area. It also opens 1.6 inches wider than before to reveal 24.5 cubic feet of cargo space with all seats up. Rear seat legroom increases by 1.4 inches while headroom doesn’t get impacted by the lower roofline thanks to the new hatch design. The Civic hatchback also gets Honda’s new Body Stability Seat for improved comfort on long drives.

The suspension tuning for the Civic sedan and hatchback are similar, meaning both should offer a pretty fun drive on your favorite winding road. Like in the outgoing generation, the Sport and Sport Touring models are equipped with wide 235/40R18 tires, which should help them grip better.

The 2022 Honda Civic Hatchback goes on sale later this year as the second member of the lineup. Honda’s not finished yet though. Following the hatch are the two performance models, the Civic Si and Type R. The latter has big shoes to fill after the last generation essentially changed the game for hot hatches and sport compacts. If you’re looking for an automatic transmission option, you may want to look elsewhere because the Si and Type R will remain manual-only affairs.