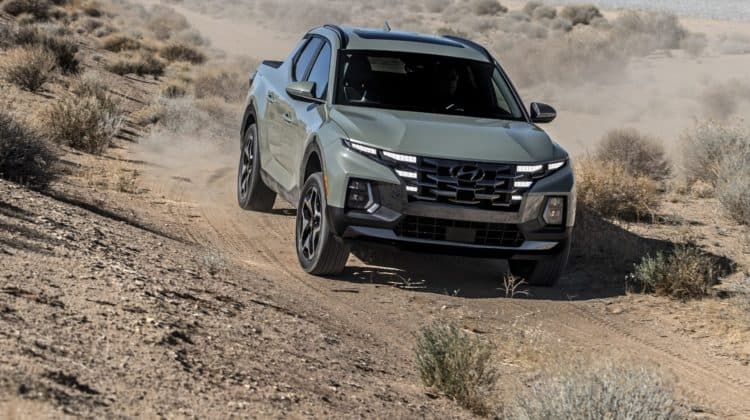 Don’t let the 2022 Hyundai Santa Cruz’s compact size fool you because it’s one of the most important models this year. Not only does it launch Hyundai’s first pickup but it also revives the long-dormant compact truck segment, which it will share with the upcoming Ford Maverick.

Think of the 2022 Hyundai Santa Cruz as a Tucson with a 4.5-foot bed in the back because it uses the same underpinnings and its design cues are similar but with a distinct flair all its own. The lower front fascia and housing for the main headlight clusters are square. Hyundai also embedded the turn signals inside the same housing as the headlights. You still get the same grille as the Tucson complete with embedded daytime running lights. In addition to being longer, the Santa Cruz is also wider than the Tucson at 75.0 inches. Hyundai sprinkled lots of cool easter eggs around the vehicle to add character. In the rear, you’ll find T-shaped taillights and a massive Santa Cruz log emblazoned across the tailgate. There’s also a retractable tonneau cover so you can keep your belongings hidden, integrated steps, and an in-bed trunk for additional practicality.

Get inside the Santa Cruz’s cabin and you’ll find a near carbon copy of the Tucson’s interior. That means you’ll find the same waterfall-like dash with no physical controls and an optional 10.25-inch touchscreen. The hoodless 12.3-inch digital gauge cluster is also available on higher trims. Hyundai’s usual suite of collision prevention technologies is standard. However, blind-spot monitoring, rear cross-traffic alert, safe exit alert, and adaptive cruise control are optional. Since it shares the same front seats as the Tucson’s, it offers plenty of support, high comfort levels, and generous adjustability. The rear seats are reasonably roomy if you’re in the outboard position. Due to the truck’s tidier dimensions, the center position is best left for kids or short trips. The rear seat cushions also fold up to reveal extra storage.

Two 2.5-liter four-cylinder engines will be offered in the 2022 Santa Cruz. The base unit is naturally aspirated making 191 hp and 181 lb-ft of torque mated to an eight-speed torque-converter automatic transmission. You can move up to the turbocharged version, which makes 281 hp and 311 lb-ft. It also gets an eight-speed dual-clutch automatic and AWD as standard equipment. EPA fuel economy ratings for the base engine are 21/27/23 mpg in FWD guise or 21/26/23 mpg with AWD. The turbocharged mill is EPA-rated at 19/27/22 mpg.

Thanks to its load-leveling suspension, the Santa Cruz’s ride is compliant, especially compared to the larger body-on-frame trucks. Because of its unibody construction, this rig drives like a compact crossover that’s a little larger and longer. As a result, it feels similar to the Santa Fe, which slots between the Tucson and Palisade even with its nearly 9.0 inches of ground clearance. The optional turbocharged engine offers prodigious power while the eight-speed dual-clutch shifts quickly. However, keep in mind that dual-clutch gearboxes aren’t as capable when going off-road and may overheat if you push it too hard off the pavement.

If you’re looking for a Tucson with added practicality and a much more potent powertrain, the 2022 Hyundai Santa Cruz should be on your shopping list. Since Hyundai hasn’t decided to offer its turbocharged 2.5-liter four-cylinder in the Tucson, this is the closest you’ll get to a hot version of that crossover. Although it’s a little firm because its suspension was designed to carry a significant payload, the Santa Cruz more than makes up for it with feature content, practicality, and surprising levels of performance.