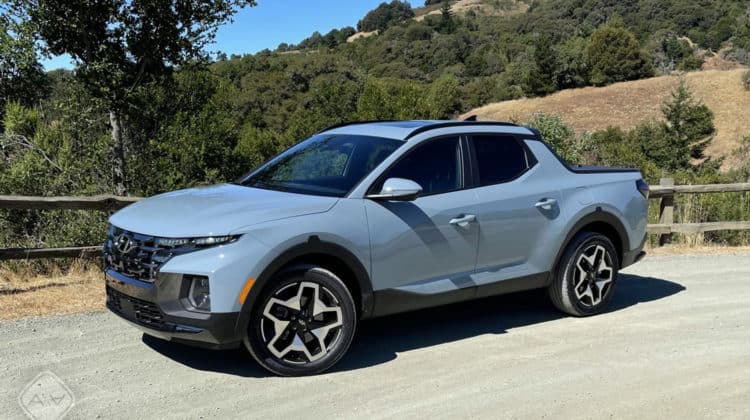 2022 has marked the return of the “small pickup” in America. While the new Hyundai Santa Cruz and the Ford Maverick might not be as small as some of you has been hoping for, they are smaller, easier to park, and better to drive than any other truck in America right now. They also offer excellent value when compared against the average compact CUV like a RAV4, Tucson or CR-V. The mission for the Santa Cruz was not to make a “Hyundai Tacoma,” but rather to make a Tucson with a pickup bed grafted on the back, and in that they succeeded brilliantly.

How small is small?

In a nutshell, not as small as you might think. At 195.7 inches long and 75 inches wide, the Santa Cruz is the smallest pickup in America, but it’s still much larger than “small” pickups in America used to be. Why? It’s all about the back doors. Like the new Ford Maverick, the Santa Cruz was designed to give you the combination of a small crossover interior with a usable cargo bed in the back. While Hyundai did shrink the rear seats a bit vs the Tucson, it’s still roomier than a Toyota RAV4 inside. That interior plus a 52.1 inch bed behind yields a vehicle longer than a 3-row Toyota Highlander. While the Santa Cruz is more nimble and easier to park than a Ridgeline or Tacoma, urban dwellers might want to reconsider the Tucson as a more practical alternative. 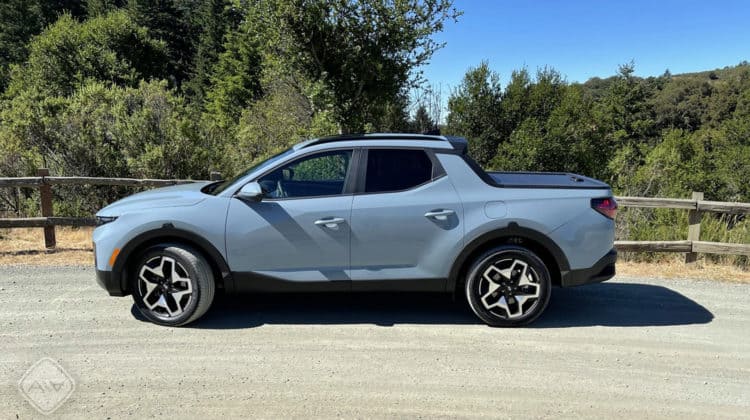 What can you put in the bed?

Rather than a square bed like you’d find in the average truck, or even the Ford Maverick, Hyundai opted for a more curvaceous design that takes advantage of the rear seat back angle to give you more room at floor level. The result is a bed length that varies from 52.1 inches at the lowest level from the cab to the tailgate, to 48.4 inches at the top. The bed’s width ranges from 53.9 inches max to 42.7 inches between the wheel wells, so 4×8 sheets of things will slide in on-top of the wheel wells, but will stick out the back 21 inches. For me at least that’s not an issue because the load should be well balanced and easy to tie down safely.

Payload has been a confusing topic for the Santa Cruz due to some incomplete information that was handed out when the Santa Cruz debuted, but they have since cleared that up. Depending on the trim you choose, payload will range from a high of 1,906 pounds (SE FWD) to a low of 1,521 pounds (Limited AWD). Bear in mind that payload is anything and anyone you put into the vehicle after it was delivered from the factory. That includes the driver, passengers, accessories, all your cargo, and the tongue weight of any trailer you connect.

Early reports were that the Santa Cruz only allowed 660 pounds in the bed, but that was an answer lost in translation. Literally. Hyundai has now clarified that the bed only maximum is 1,446 pounds, but since payload includes the driver, that maximum would only be possible in the AWD Limited model if I was testing if the driver weighs under 75 pounds. In the real world, this isn’t much of a limit. The 660 pound part? That’s the guesstimated paylaod remaining when there is a driver and four passengers inside, or the driver, one passenger, and a 5,000 pound trailer on the back.

According to Hyundai, the factory roller cover for the cargo bed sheds water and doubles as a second tier of cargo storage. I could not get a specific load rating but was told it is “strong enough to sit on” so naturally I had to test it. So far, no denting has been reported. 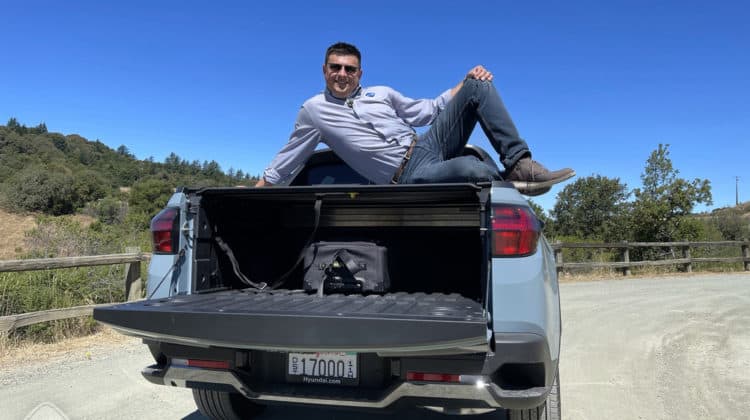 Unlike a Ranger or Colorado that use downsized drivetrains related to the larger half ton trucks in their lineup, the Santa Cruz shares engines and transmissions with Hyundai’s crossover and sedan lineup. The base 2.5L four cylinder engine is shared with the Hyundai Tucson, as is the standard 8-speed automatic transmission. Found in SE and SEL trims, the 2.5L makes 191 horsepower and 181 lb-ft of torque and is available with or without all wheel drive.

SEL Premium and Limited trims of the Santa Cruz get a turbocharged 2.5L four-cylinder that bumps power to 281 horsepower and torque to 311 lb-ft. For better or worse, this engine uses Hyundai’s new 8-speed DCT (dual clutch automatic transmission) and features standard all AWD. 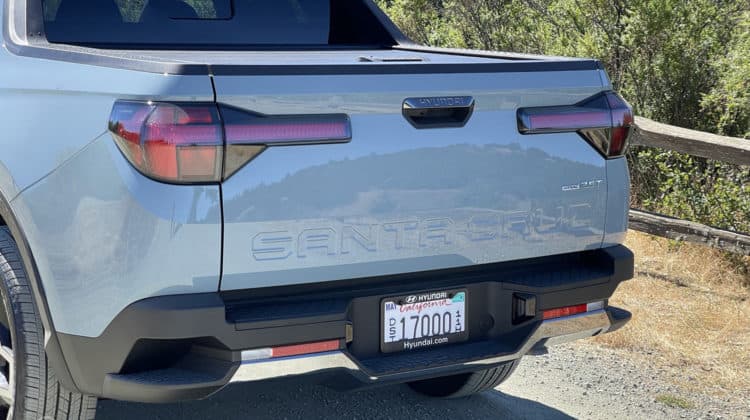 How does it drive?

When equipped with the base 191 horsepower engine the Santa Cruz feels very much like the average compact crossover, despite the additional length added by the bed in the rear. The SE model with front wheel drive weighs 3,704, a nearly 400 pound increase over the related Hyundai Tucson, but thanks to a fully independent multi-link rear suspension and standard passive load leveling dampers in the rear the extra heft isn’t immediately noticeable. The extra weight does however exact a nearly half second 0-60 penalty vs the Tucson.

If you’re looking for the sportiest small truck, you’ll want the model with the 2.5L turbo. The combination of high power, high torque and a rapid shifting DCT is surprising in a utility focused vehicle, but Hyundai was quick to point out that the target market for the Santa Cruz is a crossover shopper looking for a bit of adventure. The upsides to a DCT are higher fuel economy and rapid shifts, the downsides are a reduction in smoothness and an increased likelihood of overheating in strenuous low speed situations. Although I have never had an issue with a DCT in daily or aggressive driving, if you have a 5,000 pound trailer connected and you’re trying to rock crawl at the same time, a DCT might overheat before a standard automatic. Is this something to worry about? Probably not. 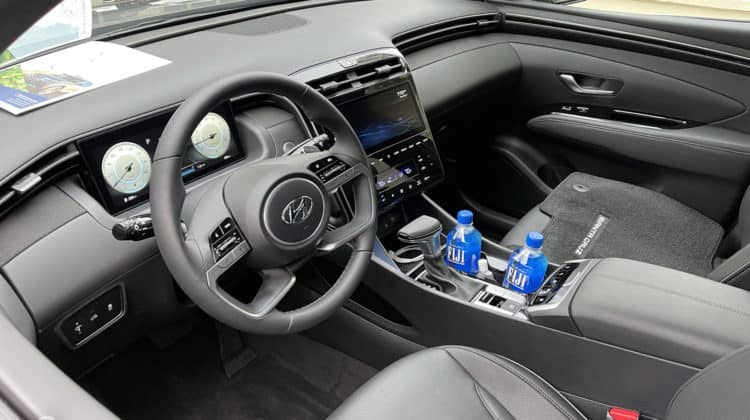 How much does it cost?

For 2022 the base model starts at $23,990 plus a $1,225 destination fee. This places the Hyundai significantly above the $19,995 base price of the Maverick, but there are a few things to keep in mind. First up, availability. All the base Mavericks have been sold out for model year 2022. Yep, if you want Ford’s baby truck in base hybrid form, the wait list is at least a year. Second, the Maverick isn’t quite as nice on the inside, quite as fun to drive, or quite as roomy as the Santa Cruz. The Hyundai also carries a longer standard warranty with a 10 year, 100,000 mile powertrain warranty which isn’t something to dismiss. Does that justify a nearly $4,000 price bump however? I can’t go that far.

Other things to consider: the Santa Cruz offers higher payload and higher tow ratings than the Maverick. On the other hand, the Ford hybrid is insanely efficient with 40 MPG possible if you’re gentle on the go pedal. The Santa Cruz feels like a more solid, more expensive vehicle, especially if you opt for the turbo model. Handling and power delivery are where the Santa Cruz shine.

Another way to look at the Santa Cruz is as a Tucson alternative and in this light it makes sense. Hyundai has priced the Santa Cruz generally below the related Tucson, so you just have to decide if you need that bed or not.

2023 Honda HR-V First Drive: I recently had the chance to spend some time … END_OF_DOCUMENT_TOKEN_TO_BE_REPLACED