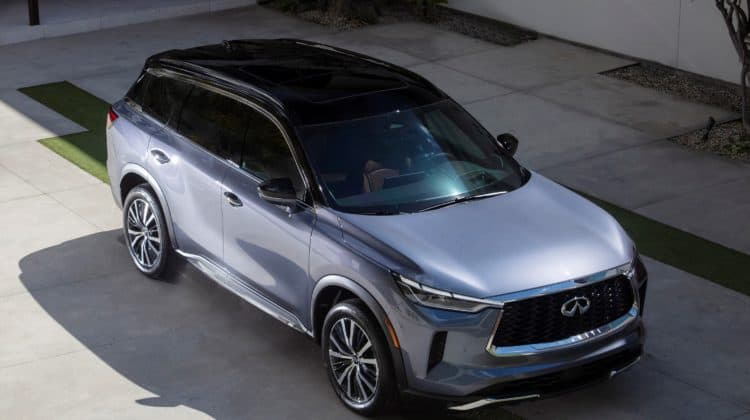 The second-generation 2022 Infiniti QX60 is the brand’s most important launch because of its best-seller status. Since it first arrived as the JX35, the QX60 has sold well over 400,000 units and is one of the most family-friendly midsize three-row crossovers in the luxury segment.

You can clearly tell that the 2022 Infiniti QX60 follows an evolutionary approach to design. It refines the design cues of the outgoing car, creating sharper angles and a looks that’s distinctly Infiniti. The same family look found in the QX50 and QX55 is present here, only this time the headlight clusters are thinner and the lower air openings are squared. Most of the cues from the QX60 Monograph carried over nearly unchanged, giving the production version a boxier profile and a more upright rear end.  In the back, you get horizontal taillight clusters connected by a black strip, and Infiniti is spelled out between them.

Underpinned by a heavily updated version of the outgoing car’s platform, the QX60 remains closely related to the Nissan Pathfinder. It also uses the same 295-hp 3.5-liter V6, which gets some subtle updates, and is now paired to a nine-speed automatic transmission. FWD is standard while a revised AWD system with a direct coupling is optional and can send 50 percent of available power to the rear wheels for improved grip. There’s also a new Active Brake Limited-Slip function that individually applies the brakes to redirect torque to the wheel with the most grip. Maximum towing capacity when properly equipped is 6,000 pounds or 20 percent more than the previous QX60.

Where the Infiniti QX60 stands out most is the interior. You get seating for up to six- or seven passengers depending on whether you get the available second-row captain’s chairs. Regardless of the configuration, you’ll be able to move the second-row seats aside with a child seat in it just like in the Pathfinder. The Autograph model, which is likely the range-topping model, has a two-position bench in the third row. You’ll notice that the first two rows also have generous swaths of diamond-quilted semi-aniline leather, even on the dash, further highlighting the QX60’s focus on luxury. To add more pizzazz to the QX60’s interior, it gets ambient interior lighting and standard three-zone climate control. The QX60 is also the first Infiniti model to offer front seats with a massaging function.

Being a family-friendly luxury crossover, the Infiniti QX60 has 41.6 cubic feet of cargo space. The underfloor storage is good for 54.1 liters, which Infiniti says is an increase of almost 21 liters versus its predecessor.

The old two-screen infotainment system has been replaced by a single 12.3-inch touchscreen with Apple CarPlay and Android Auto compatibility. Certain versions also get a 10.8-inch head-up display and a digital gauge cluster. A 17-speaker Bose Performance Series audio system will also be available.

ProPilot Assist, which is Nissan and Infiniti’s semi-autonomous driver assistance feature now gets linked with the navigation system, meaning it can use data from there to anticipate road conditions ahead and slow the vehicle down ahead of curves, on-ramps, and turns. Every 2022 Infiniti QX60 will get front and rear automatic emergency braking, forward collision warning, and pedestrian detection as standard equipment.

The 2022 Infiniti QX60 goes on sale in late 2021. Pricing, feature availability, additional specifications, and reservation information will be announced closer to the crossover’s on-sale date.