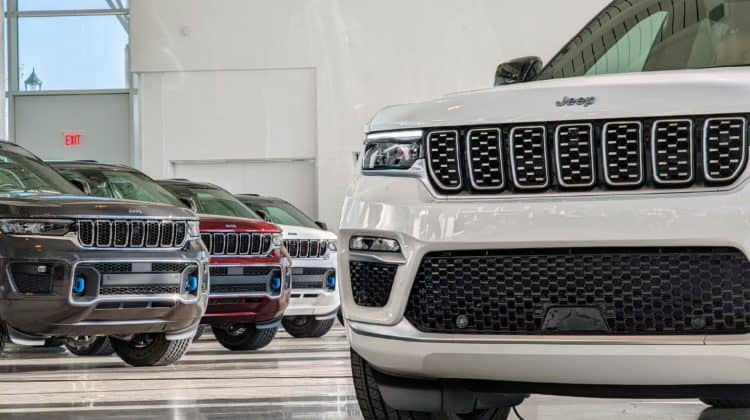 Jeep is currently the only North American Stellantis brand other than Chrysler to offer a plug-in hybrid powertrain in its lineup. That will change for Maserati and Alfa Romeo very soon, but I’ll save that for another story. ‘4xe’ is the name of Jeep’s plug-in hybrid system, a name that confuses some people but clearly combines ‘e’ from electricity with 4×4. Following the Wrangler 4xe, this all-new 2022 Grand Cherokee 4xe honors its name with equal parts off-road capability and on-road comfort. Jeep is proud that it can still go to most of the places its ICE siblings can, while also giving drivers 25 miles of electric-only driving. 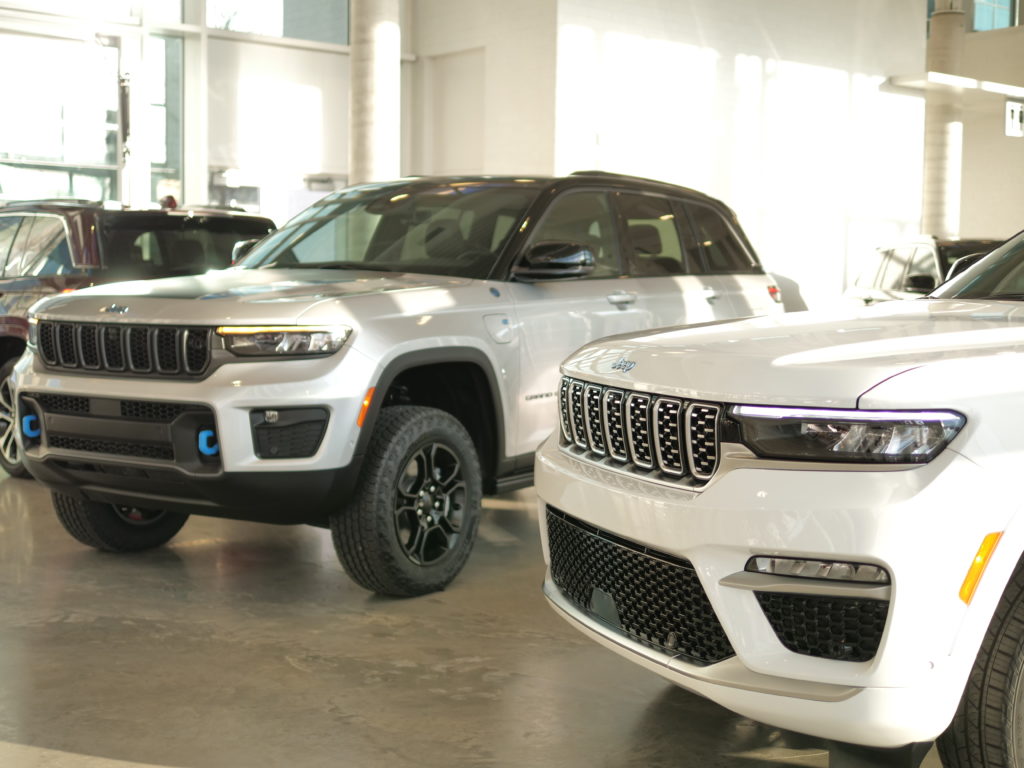 Jeep’s approach to 4xe does not incorporate many design changes over existing ICE variants. They did it this way with the Wrangler 4xe and have stuck to that formula here. The only real way to tell that you’re looking at a plug-in hybrid Grand Cherokee is by the light blue tow hooks or the subtle badging on the tailgate. As such, this is still a handsome SUV with a forward-leaning nose and a familiar overall shape that helped the last generation become such a sales success. As with the ICE models, I am not as much of a fan of the tailgate’s black full-width accent bar, which is not present on long-wheelbase Grand Cherokee L models. Speaking of the L, you can’t opt for the 4xe powertrain on the three-row GC, at least not yet. Jeep execs could not comment on future products, but their facial expressions said all you need to know about that possibility down the line.

In all trim levels, the interior of the Grand Cherokee 4xe is a step up from the previous generation. Whether you’re in a Trailhawk or a Summit Reserve, the materials are of a higher quality and the tech is more advanced. The interactive passenger display that is optional on ICE models is standard on all trims of the 4xe, which is a welcome benefit of going green. It is the best implementation of such technology that I have experienced. It has all of the cool wish list features you wouldn’t expect to make it to production like access to the 360-degree surround cameras and control of separate media inputs. The Summit Reserve we drove had the Tupelo Palermo leather seats, a head-up display, night vision camera, and the digital rearview mirror. Every seat in the house was comfortable, with heating and ventilation for four out of five positions.

Jeep claims the 4xe is the fastest Grand Cherokee you can get. With a 0-60 mph estimate of 6 seconds flat in hybrid mode, both the 4-cylinder turbo and electric motors do a better job at seamlessly delivering power than the Wrangler 4xe. As with that model, there is a 2.0L turbo inline 4-cylinder that makes 270 horsepower and 295 lb.-ft. of torque. That is joined by a 134 horsepower, 195 lb.-ft. traction motor that replaces the eight-speed automatic transmission’s torque converter. Finally, a 44 horsepower, 39 lb.-ft. electric  starter/generator motor runs on the accessory drive. The battery pack is a 17.3-kWh lithium-ion unit.

There are three modes to manage the drivetrain’s operation, all accessible via physical shortcut buttons to the left of the steering column. There is ‘Hybrid’, ‘Electric’ and ‘e-Save’, the first two being relatively self-explanatory. e-Save, however, gives you a nifty ability to decide what the car does with the battery, the kind of control you give up in other hybrids. Here, you can tell the GC to make the engine act as a generator to charge the low or depleted battery. Or, you can tell it to preserve what’s left by favoring the gas engine. It can be triggered on demand or when the battery percentage reaches a threshold you choose. While it is a great way to manage your electricity consumption, we suspect that only those who are fuel-miserly or car people will actually fiddle with any of it. If you never plug in your 4xe, hybrid fuel economy should hover around 23 combined. That barely beats out the V6, but the V6 can’t drive 25 miles on electricity alone like this can.

The plug-in hybrid version of the Grand Cherokee has basically the same capability as the rest of the lineup, including 24 inches of water fording capability. The four-wheel drive system utilizes an electronic limited-slip differential in the rear which basically acts as an e-locker and a torque-vectoring differential. Power is shuttled around the front axle left to right by the brake-based system. The way Jeep has packaged the 4xe drivetrain components is also important for off-roading. They have additional skid plates in order to protect the battery and inverter modules underneath the vehicle, which really pays dividends when it comes to driving on rocky surfaces.
The 4xe Grand Cherokee is definitely heavier than the ICE models, with a weight penalty of about 700 pounds. Although the Grand Cherokee has grown generation over generation, Jeep has still focused on keeping a tight turning radius, essential for the off-road courses  that some owners take these on. In really tight off-camber situations, the limited-slip rear axle is definitely a benefit to the Grand Cherokee because vehicles with traditional lockers and no ability to mechanically lock and torque-vector across the rear axle can actually end up sliding down declines. That’s not what you want to do in tricky rocky situations.
The second generation of the Grand Cherokee’s airlift suspension is much more refined than the original. When the previous GC was at its maximum extent of suspension travel, it was very noisy with some loud bangs and thumps going on. They have certainly improved that with this generation of the system. It now has the ability to adaptively dampen while also adjusting for lift. The Grand Cherokee’s rigid unibody construction and independent suspension continue to make the 4xe variant a confident off-roading machine. 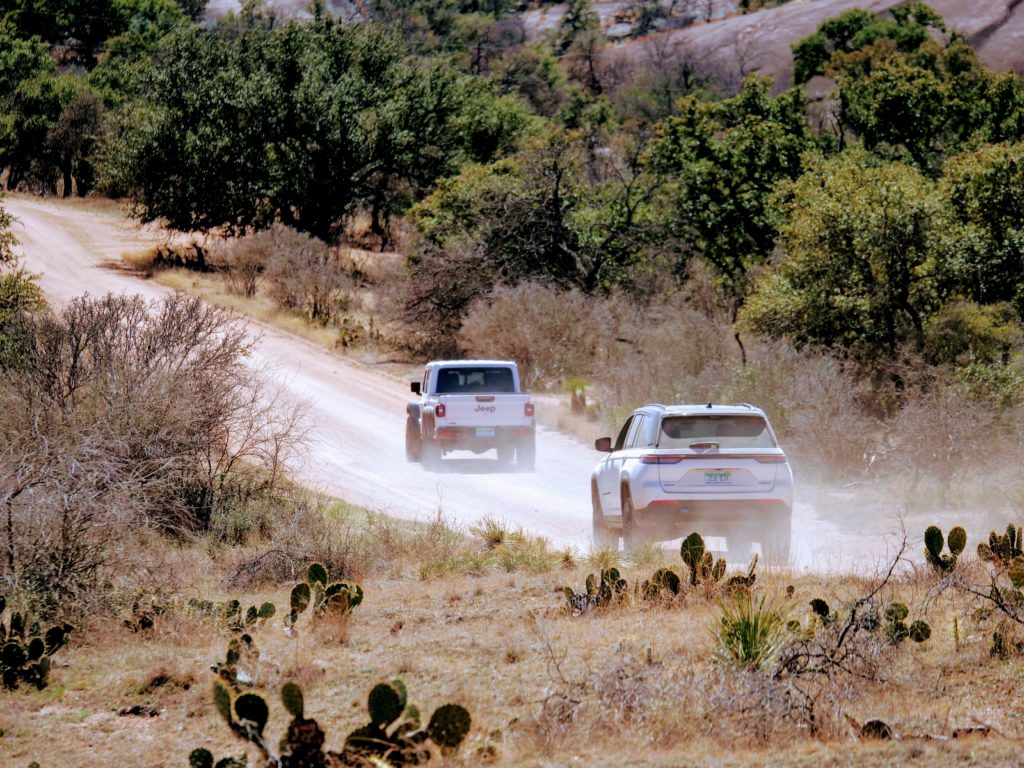 A hallmark of the new Grand Cherokee has been its marriage of excellent on-road comfort to the aforementioned off-road prowess. This car has always been known for being just as comfortable at the strip mall, but the 4xe has an elevated experience that no GC before it has been able to muster. This is most apparent in the Summit Reserve trim, but you’ll notice it no matter which theme you choose. As mentioned earlier, the transition between gas and electric power is very seamless, more so than its closest competitor, the Lincoln Aviator Grand Touring. Like that model, however, the Grand Cherokee 4xe has a smooth ride and controlled body movements. The wind noise, however, is a little too much on the top trim, where it should be more hushed like the Aviator for this price.

The Overland trim fills the middle ground at $67,555, but actually makes the interactive passenger display optional, which is a bit odd. This trim is a mix of Trailhawk and Summit, as it can be optioned with the Off-Road Group which adds the more serious suspension upgrades from the Trailhawk while feeling more like a Summit on the inside. The panoramic moonroof becomes standard on this model. The Summit starts at $71,615 and adds the two-tone paint options and adds optional luxury features such as a 4-zone automatic climate control and Napa leather seats.

The Summit Reserve trim starts at $76,095, with the unit we drove coming in at $79,000. It had additional features like a head-up display, night vision camera, digital rear-view mirror, rear window sun shades, wireless phone charging, ventilated rear seats, and a 19 speaker McIntosh audio system, among other things. That’s a pretty penny, but it comes in at the low end of the Aviator Grand Touring’s price range. Another competitor could be the Land Rover Range Rover Sport P400, which is decently more expensive and luxurious, but still capable off-road. The Aviator is the only one of the three that retains a third row in its plug-in hybrid variant, but it will not go as far away from pavement as the Jeep.

So, it comes down to what you value in your plug-in hybrid SUV. As a fully-configured Summit Reserve, it is a good value compared to its luxury rivals. It still qualifies for the $7,500 federal tax credit, so keep that in mind. At the end of the day, there are even a lot of features down at the low end of the lineup that justify settling for a base trim. The Trailhawk will still go off-roading like a proper Jeep. Add in the versatility of the hybrid system, its fuel economy, and better acceleration, and we think the 4xe is the one to get over either of the other engine options.