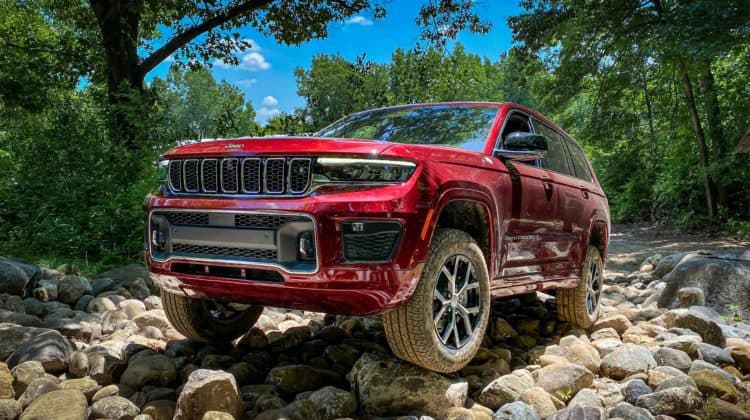 It’s time to finally see how the 2022 Jeep Grand Cherokee L drives and goes off-road. If you’re looking for a deep dive, check out the previous video and post. Now, let’s hit the road with Alex to see if this newest Jeep is truly one.

On the road, the 2022 Jeep Grand Cherokee L’s road manners depend on which engine you get. The heavy curb weight, which ranges from 4,500- to 5,300 pounds, changes the way the SUV drive. However, if you get one with the available 5.7-liter V8, you’ll get the quickest model regardless of how heavy the example you’re driving is. The V8 also effortlessly moves the Grand Cherokee L whereas the V6 can sometimes get winded.

With either the standard 3.6-liter V6 or the optional V8, acceleration times are similar to the Dodge Durango. Depending on the configuration, the Grand Cherokee L may at times be lighter than its three-row counterpart over at Dodge. Stopping distances vary based on the trim, too, because wider tires and the crossover’s weight affects overall braking performance.

Quite possibly the biggest change for the 2022 Grand Cherokee L is the SUVs refined feel. The previous generation already had the upscale sensibility and the new generation builds on that. Jeep added adaptive dampers to go with the optional air suspension, giving the Grand Cherokee L a more polished ride. Although it firms up in Sport mode, it’s always going to be relatively soft and more of a cruiser than a canyon carver. The near-perfect weight distribution gives the Grand Cherokee L composed handling for its size, resulting in a crossover that goes down the road confidently. Good weight further adds to the composed road manners without sacrificing comfort.

During the drive, the Jeep Grand Cherokee L proved incredibly quiet. Our initial test got a noise reading of 70 dB even in the off-road-oriented Overland trim with the knobbier tires.

The first thing you need to keep in mind when going off the beaten path with the Grand Cherokee L is that this is the long-wheelbase model with three rows. That added length does hamper things slightly in the dirt but that doesn’t it’s not as capable. Quite the opposite, actually. The Grand Cherokee L is still quite formidable off-road, offering similar or better chops than your average Land Rover or Ranger Rover despite being longer. Its AWD systems are also designed to operate even when two wheels are up in the air. The SUV also has up to 11.0 inches of ground clearance and electronic rear locking differential, allowing it to shuffle power side to side or send 100 percent of power to a single wheel. In front, a brake-based torque vectoring system sends power left to right. However, if you want the most capable Grand Cherokee, the two-row may the one to get because of its more advantageous size.

Jeep’s new independent suspension provides a lot of articulation and wheel travel than your average three-row crossover. Despite its size, the bones have been designed to get you through tough trails thanks to its electronics, AWD system, and chassis design.

To sum up, the 2022 Jeep Grand Cherokee L is a well-rounded three-row SUV that blends capability, comfort, and luxury seamlessly. No, it’s not as capable as a Wrangler but it’s definitely rugged enough to give Land Rovers a run for its money. Jeep isn’t done yet because there’s a two-row and a plug-in hybrid variant coming too. Later on, the Wagoneer and Grand Wagoneer will join the lineup, continuing the direction that Jeep is headed towards with the arrival of the Grand Cherokee L.