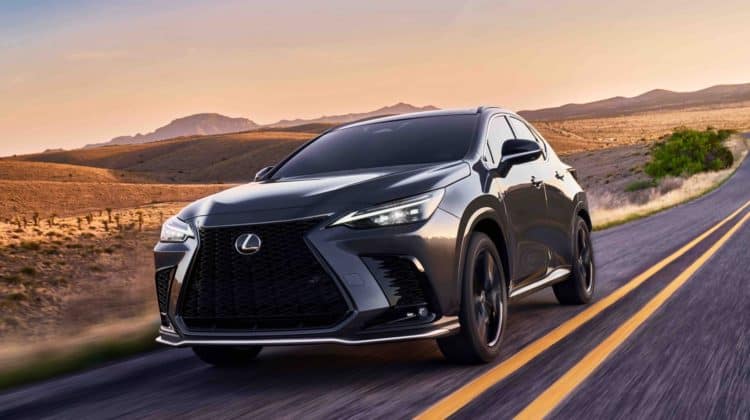 The 2022 Lexus NX has arrived and it comes packing more electrified powertrains, a new turbocharged engine, and a new user interface (hallelujah!). Slotting below the RX, the NX competes with the likes of the BMW X3, Audi Q5, Lincoln Corsair, Acura RDX, and Volvo XC60. The NX is the latest Lexus model to move to Toyota’s TNGA-K platform, which is already used in the ES sedan and several Toyota models including the Avalon, RAV4, Camry, and Venza.

For its second generation, the 2022 Lexus NX follows an evolutionary direction for its exterior. You find what’s essentially a refinement of the old car. The angular LED daytime running lights are now integrated within the headlights cluster and the spindle grille has a different pattern based on the trim you choose. In the rear, you find thin full-width LED taillights and Lexus spelled out on the tailgate instead of the badge. From the side, the 2022 NX’s silhouette is quite similar to the old car’s further showing the evolutionary design direction.

Moving inside, designers have given the 2022 NX a driver-oriented layout. The main 9.8- or 14.0-inch touchscreen is tilted slightly towards the driver and the center console now has a wireless charging pad and two USB ports just in front of it. Best of all, the old touchpad-based user interface has been replaced by a new UI that will eventually find its way into more Toyota and Lexus models. It features a new user profile feature that lets you save your settings with your key or smartphone, allowing the car to switch everything from media to your preferred seat and mirror adjustments when it detects one of the other. There’s also a new virtual assistant feature for those that want to interact with the car via voice commands.

For those looking for an electrified powertrain, the NX will be available with two of them. Both are based on a 2.5-liter four-cylinder coupled to two electric drive motors, a battery, and a planetary set. In the NX 350h, this system makes 239 hp combined. This variant is good for a 0 to 60 mph time of 7.2 seconds according to Lexus.

Should you want more, the NX 450h+ adds a larger battery, allowing it to travel 36 miles in EV mode and make the same 302 hp as the mechanically related Toyota RAV4 Prime. Lexus says that the NX 450h+ can hit 60 mph in 6.0 second flat. The standard 3.3 kW onboard charger allows the NX 450h+ to fully charge in 4.5 hours using a level 2 AC charger. The optional 6.6 kW charger should cut charging times by 1.0 to 1.5 hours. Lexus also added an upgraded AWD system on the NX 450h+ that better optimizes front and rear torque distribution based on driving conditions.

Lexus added the Predictive Efficient Drive system to help improve efficiency. It couples with the navigation system and learns your driving habits to predict road conditions ahead and optimize battery operation. The more miles you drive, the better the car learns your driving style, meaning it can remember where you’ll slow down or stop. That allows the car to increase regenerative braking to recuperate more energy and cut overall fuel consumption.

Lexus will continue to offer an F Sport variant on the 2022 NX but it will be limited to the NX 350 and NX 450h+. This adds performance dampers, the active variable suspension, and black 20-inch alloy wheels. Cosmetic changes include front sport seats, a unique gauge cluster, aluminum pedals, body-colored fenders, black roof rails, and an F Spot steering wheel.

The Lexus Safety System+ 3.0 suite will be standard on the 2022 NX. This builds on the current Lexus Safety System+ 2.0 with emergency steering assist, front automatic emergency braking that can detect other vehicles, pedestrians, and cyclists at junctions and intersections, and adaptive cruise control that can slow down for tighter turns at highway speeds.

Production of the 2022 Lexus NX starts in the third quarter of 2021. Pricing will be announced closer to the crossover’s on-sale date. The second-generation NX is the first of a slew of vehicles being introduced by Lexus through 2025 with 10 of them being electrified. Expect the next-generation RX to follow suit along with several other cars including the production version of the LF-Z concept.