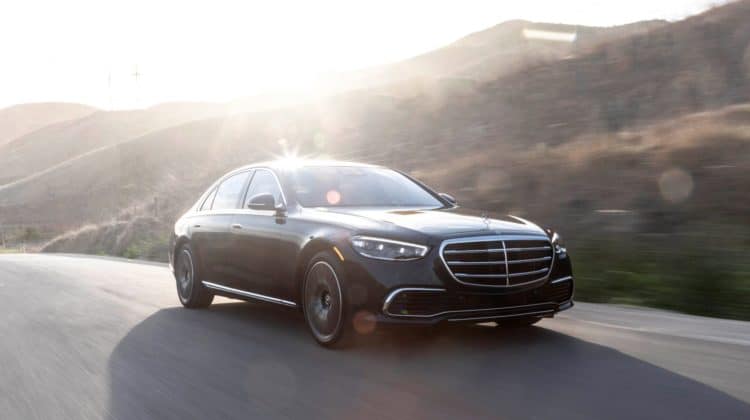 Our good pal Sofyan Bey from Redline Reviews has graciously shot us a video on the 2022 Mercedes-Benz S-Class and emulated Alex’s trunk comfort index demonstration including closing himself inside the trunk. Long the gold standard among luxury sedans, the S-Class is the epitome of what a premium vehicle should be. Every automaker takes notice of this vehicle whenever a new generation arrives.

As before, the 2022 Mercedes-Benz S-Class wears an evolutionary design that clearly shows it’s a member of the Mercedes-Benz family. Certain models still get a hood ornament to give it that classic Mercedes-Benz look and a new take on the brand’s radiator grille design, which is larger than before. The LED headlight clusters are narrower than before. At 208.6 inches long, the 2022 S-Class is 1.3 inches longer than the outgoing model and its wheelbase is around 2.0 inches longer at 126.8 inches. Mercedes only sells the S-Class in long-wheelbase flavor in the U.S., meaning it’s longer than many of its competitors including the BMW 7 Series and Audi A8.

The interior is essentially a sanctuary of luxury with incredible materials, build quality, and color combinations. Supremely comfortable seats complete with pillows mean you’ll be pampered on long drives. If you’re in the rear, you’ll have the best thrones in the house because of how extensively you can customize them. Every function in front is mirrored in the back, you also get pillows and three screens that control the MBUX interface. As a result, it’s best to be driven around in the S-Class rather you driving the car around.

Several new multimedia safety features have also been introduced on the S-Class including the ability to sense a side collision and raise the car a few inches to disperse the impact onto the side of the car more evenly. MBUX has been upgraded and is now easier to use; however, Mercedes has done away with most of the physical buttons, putting nearly everything on the main 12.8-inch touchscreen. There’s also a new augmented reality head-up display that essentially turns the windshield into a giant screen by showing key information right in your line of sight.

Two engines will initially launch on the 2022 S-Class: the S 500 gets a 3.0-liter turbocharged inline-six with a 429 hp and 384 lb-ft of torque while the S 580 gets a 4.0-liter twin-turbocharged V8 with 494 hp and 514 lb-ft. Both engines use a 48-volt mild-hybrid system with torque fill capability, allowing it to add more torque in certain situations. All models get a nine-speed automatic transmission and AWD as standard. A plug-in hybrid variant, two AMG models, and  Maybach flavors are coming at a later date.

Behind the wheel, the S-Class provides smooth, effortless power, especially in the S 580. The air suspension keeps the ride glass smooth even with the available 20-inch alloy wheels. Despite its size, the S-Class moves quite confidently; credit the rear-wheel steering for the agility and making this big sedan drive smaller than it actually is. Best of all, the S-Class feels special on the road. Nothing else is like it and you know you’re driving something out of the ordinary.