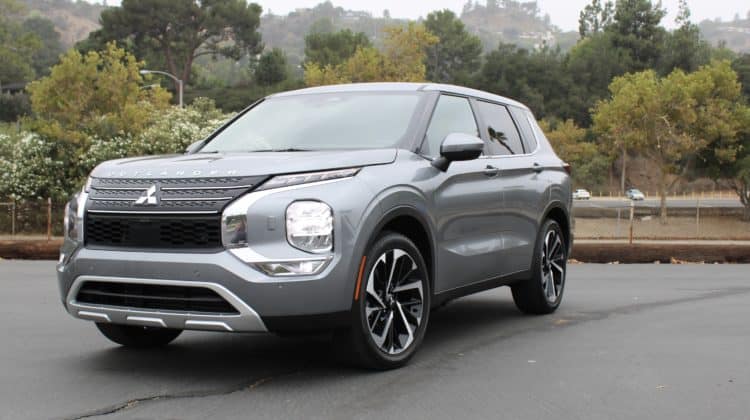 If you thought the 2022 Mitsubishi Outlander was just a three-row Nissan Rogue with a different skin, you’d be forgiven. Underpinned by the CMF-C/D platform from the Renault-Nissan-Mitsubishi Alliance parts bin and powered by the same 2.5-liter four-cylinder paired to a CVT, it’s easy to think the Mitsubishi is just a reskin. Thankfully that’s not the case because the Outlander has a unique character that distinguishes it from its cousin over at Nissan thanks to unique tuning.

Let’s get the other elephant in the room out of the way and that’s the looks. You’re either going to love or hate the styling of the 2022 Mitsubishi Outlander. The front fascia looks angry with Mitsubishi’s new “dynamic shield” corporate grille now integrating the LED Daytime running lights. Like many crossovers these days, the main LED headlight projectors are mounted low flanking the massive chrome-clad grille. Moving on to the side, the Outlander’s awkward proportions are in full show. The overall design is biased towards the rear and the thick D-pillar adds to its overall chunkiness, further added heft to that area. Things get a little more conventional when you get to the rear, which is dominated by the horizontal taillight clusters.

Moving inside, you’re greeted by lots of buttons shared with the Rogue and the same infotainment system waring a slightly different skin. That’s not a bad thing because this interface is user-friendly and easy to figure out because of its simplified menu structure. The optional 9.0-inch touchscreen is responsive, which adds to its ease of use. SE and higher models are available with a 12.3-inch digital gauge cluster that offers plenty of customizability and presents info in a clutter-free manner. However, it doesn’t show your navigation maps. Apple CarPlay and Android Auto are standard with the former gaining wireless capability on upper trims. The available 10-speaker Bose audio system is a solid unit, offering crisp sound and good levels of coverage throughout the cabin.

On the driver assistance front, Mitsubishi has essentially borrowed from the Alliance parts bin. That’s not a bad thing because they work well, especially the MI-Pilot Assist, Mitsubishi’s version of ProPilot Assist. On the freeway, the system works seamlessly, keeping you centered and helping you steer through gentle turns at highway speeds. The adaptive cruise control component does a great job keeping your set distance and gives you enough room to make emergency maneuvers but not for someone to cut you off. The collision prevention features work in the background and aren’t very intrusive, which keeps them from feeling overprotective.

One of the biggest areas of improvement for the 2022 Outlander is build quality. You get plenty of soft-touch materials and padding in nearly every surface you interact with. There are harder bits but they’re nicely textured and don’t feel cheap. Mitsubishi also added more sound insulation, resulting in a cabin that stays nice and quiet even at highway speeds. You hear the road, tire, and wind noise but they’re pretty muted. Even the engine sound is kept to a minimum when you rev it out.

Although you have seating for seven, it’s best to treat the Mitsubishi Outlander as a 5+2. The third row is incredibly tight even when you slide the second-row bench all the way forward. Keep it to kids and your mother-in-law back there. Those in the first and second rows, on the other hand, will be comfortable even during longer drives thanks to generous amounts of head and legroom. Most consumers will keep the third row folded to maximize cargo space. Drop everything but the front seats and you get a nice square space for bulky items and massive shopping sprees of flat-pack furniture.

The first big difference you’ll notice is the way the Outlander drives. It feels bigger and cushier from behind the wheel whereas its Nissan cousin is tighter and lighter on its feet. That’s not surprising because the Mitsubishi Outlander is around 200 pounds heavier than the Nissan Rogue. It also has a bigger exterior footprint and it’s boxier, meaning it drives as it looks. Slower, more relaxed steering also adds to its relaxed road manners; thankfully, it’s also accurate, meaning you can easily place and maneuver it on the road. When taking turns body roll is evident but controlled nicely, further hinting at its comfort-focused suspension. Despite wearing 20-inch alloy wheels, the Outlander does a great job absorbing road imperfections and uneven pavement, meaning you won’t feel much unless you hit a seriously big pothole.

The Outlander isn’t very powerful with only 181 hp and 181 lb-ft of torque from its 2.5-liter four-cylinder. The well-tuned CVT does a fantastic job getting the most out of the engine and keeps the crossover from feeling underpowered even when you load it up with people or stuff. Put your foot down and it responds quickly, immediately bringing the engine to its sweet spot. Even in Normal mode, the powertrain is responsive and does exactly what you want thanks to the CVT not trying to get away with the highest ratio it can.

If there was an award for most improved, the 2022 Outlander would be one of the recipients. It’s gone from an anonymous crossover to one with an identity. Mitsubishi honed in on the fundamentals and created an entry that takes advantage of its strengths while adding modern technology to the mix. Comfortable, refined, and practical, the Outlander gives you a family-friendly crossover packed with lots of substance and value. At just over $34,000, our test gives you a lot of bang for your buck. Even a loaded range-topping SEL trim with the Touring package keeps its value proposition because it gives you so much content while managing to stay under $40,000 regardless of whether you get AWD or not.

For consumers looking for a roomy crossover but don’t want to go up to the next size up, the 2022 Mitsubishi Outlander should be on your shopping list. The fact that it has a long warranty is just icing on the cake now because there’s so much substance and value throughout the lineup. With the imminent arrival of the plug-in hybrid variant next year, Mitsubishi is poised to strengthen its most popular model by adding power, efficiency, and additional versatility. Finally, the once-storied Japanese brand appears to be emerging from years of decline stronger and more focused.