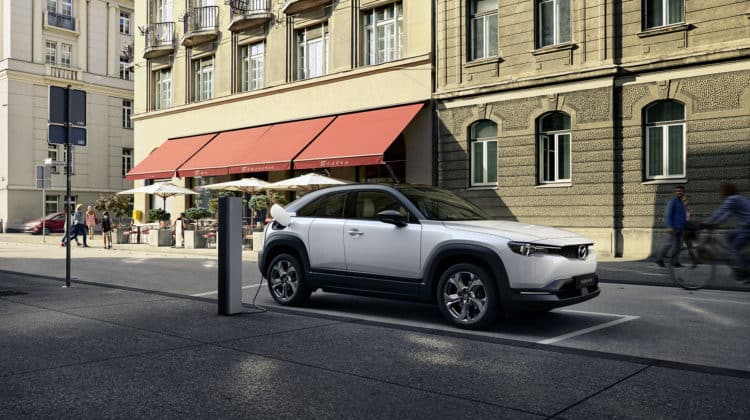 Mazda’s first electrified vehicle will finally be available in the U.S. later this year! However, you must be in California because it’s the only state where the MX-30 will be initially sold in. When it arrives, the Mazda MX-30 will be sold as a pure EV first, featuring a 35.5-kWh lithium-ion battery and an electric motor with 144 hp and 200 lb-ft of torque. This subcompact crossover, however, will only be available in FWD guise when it goes on sale in the fall.

Under the skin, the 2022 Mazda MX-30 shares its underpinnings with the Mazda3 and CX-30. The brand’s compact car platform has been made with electrification in mind, allowing it to accommodate everything from a full battery-electric powertrain to a hybrid.

Later in 2022, Mazda will add a plug-in hybrid variant of the MX-30 to the lineup. Unlike most hybrids and plug-in hybrids currently on sale, the internal combustion engine will act as a generator for the battery and electric motor. That means the car will drive more like an EV despite having a gas engine. In true Mazda fashion, the generator will be a rotary engine, marking the design’s return since the discontinuation of the RX-8 sports car back in 2012. We don’t know how much power the MX-30 plug-in hybrid will make; however, we’re not expecting it to be any higher than the EV model. The battery size should remain, which could give the car a generous all-electric range versus most PHEVs. However, the total range could be lower than expected.

Like the Mazda3 and CX-30, the MX-30’s interior follows the same minimalist layout but the center stack has been reworked to further distinguish the electrified model from its siblings. To keep things familiar, the gear shifter looks like it came out of an internal combustion vehicle while the main display appears to be the same 8.8-inch unit that was recently added to the Mazda3 and CX-30. There’s another stack in the lower part of the dash for the climate controls. Mazda’s infotainment system, which is controlled via a knob and the four buttons around it, remains and they’re mounted on a floating center console.

Sustainability is a key theme to the Mazda MX-30’s interior. The materials are used in the cabin are made of recycled plastic bottles and cork on the center console. It’ll also get cool new cloth upholsteries that should add a different feel and boost the MX-30’s green credentials. That fast descending roofline, however, could cut into the car’s total passenger and cargo accommodations. The car’s suicide doors will likely make it less versatile versus its CX-30 sibling.

The MX-30 is the first of a range of electrified vehicles that Mazda will launch within the next few years. A hybrid crossover co-developed with Toyota will join the lineup. Plug-in hybrids utilizing Mazda’s upcoming large vehicle platform, which is rear-drive-based, are also under development. in other markets, the MX-30 is offered as a mild hybrid using a 2.0-liter four-cylinder backed by a 24-volt battery and an integrated starter generator for a slight increase in torque.