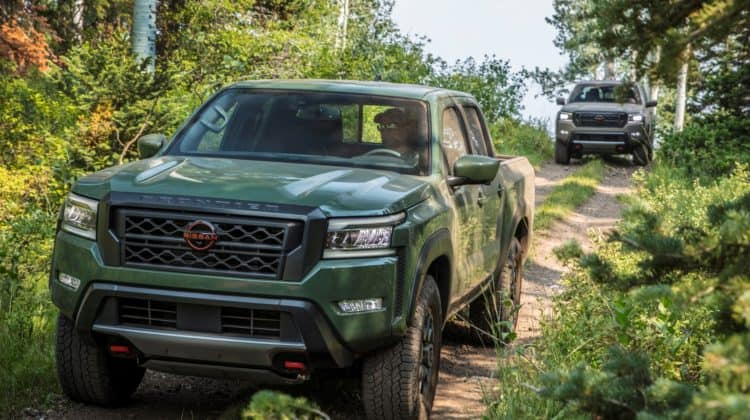 The redesigned 2022 Nissan Frontier has put the truck back on the map. Although the underpinnings are the same as the outgoing model, Nissan tweaked everything significantly to make sure the new truck is better than its predecessor. Its styling has also evolved, giving it a family resemblance to the larger Titan and a bolder, more angry look. You get a square grille and rectangular headlights. PRO-4X models also get red badges, red tow hooks, and lots of blacked-out treatment to go with the extra underbody protection and off-road-oriented suspension upgrades. There’s also a new PRO-X trim, which is essentially a rear-drive version of the PRO-4X Frontier.

You’ll be able to configure the 2022 Nissan Frontier with either a five- or six-foot bed and in either access or crew cab configurations. Nissan says the bed is deeper than before and has a damped tailgate as standard. The interior is a big improvement over the outgoing Frontier because you get all the latest tech and driver assistance features. Unfortunately, the seats aren’t as adjustable and the steering wheel doesn’t telescope. Rear seat accommodations are fine for adults on short trips but are best used for kids. At least the cushions flip up to reveal a storage area and give you additional flexibility. The dash layout is similar to the larger Titan featuring either an 8.0- or 9.0-inch touchscreen with Apple CarPlay and Android Auto compatibility.

Under the hood is a 3.8-liter V6 with 310 hp and 281 lb-ft of torque. The only transmission available is a nine-speed automatic transmission. Nissan says the Frontier should be EPA-rated at 17/22/19 mpg city/highway/combined with 4WD. RWD models are rated slightly higher but you lose out on the two-speed transfer case. Max payload is 1,610 pounds while towing tops out at 6,700 pounds in the rear-drive model. On the road, you’ll immediately notice the refinements of the new powertrain. While it’s not quicker than the old 4.0-liter in the outgoing truck, it’s still plenty usable thanks to the nine-speed automatic’s gear ratio spread being optimized for off-road duty, towing, and good road manners.

The Frontier’s size is perfect for those living in the city or suburbs because it allows them to fit tighter spots better. Since it’s narrower, the Frontier is easier to park and maneuver on narrow roads compared to your typical full-size truck like the Ford F-150 or Nissan’s own Titan. At highway speeds, the Frontier is now one of the quieter midsize trucks and doesn’t suffer from as much wind and road noise as competitors like the Toyota Tacoma, giving it a more refined feel.

The 2022 Nissan Frontier is a pickup truck that’s easy to live with. Although it could use more seat and steering wheel adjustability, there’s plenty to like with this rig, and is considerably more comfortable than some of its competitors, especially the Toyota Tacoma. At $27,840, the Frontier is about $1,000 more than the outgoing model. That, however, doesn’t hurt its value proposition because you get the V6 engine standard and a long list of standard features that include ones that may or may not be available on the less expensive versions of its rivals. The SV is expected to be the volume model while the range-topping PRO-4X should be the off-road enthusiast’s choice. Regardless of which variant you choose, you’re getting a lot of value for the money.

Look out for a full review of a 2022 Nissan Frontier once Alex can get his hands on one for a full week.