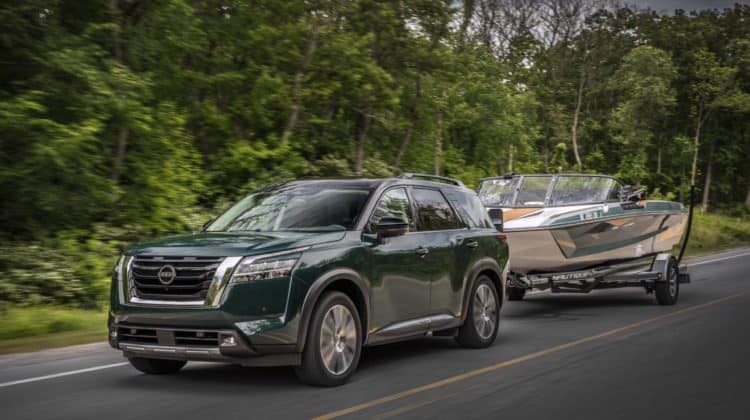 The 2022 Nissan Pathfinder has evolved into a boxier, more imposing crossover with a Land Rover-esque presence. Although it has the same family look as the Rogue, the Pathfinder looks tougher than its compact sibling. Versus the outgoing model, the new model is shorter than before but it’s also wider and more upright. In the rear, you’ll find Pathfinder spelled out across the liftgate and thin taillights.

Most of the mechanical bits under the 2022 Nissan Pathfinder’s skin is essentially the same. However, the platform and suspension received an extensive rework for the new generation. The 3.5–liter V6 carries over generating the same 284 hp and 259 lb-ft of torque as before. However, it now gets paired to a ZF nine-speed automatic transmission instead of a CVT. FWD is standard while AWD is optional.

The 2022 Pathfinder is one of the most versatile vehicles in its class. From the myriad of storage cubbies to the bin below the cargo floor, there’s a lot of places to stow your gear. However, with all seats up, there isn’t much cargo space, which is typical for the three-row crossover segment. You also get plenty of clever features like the removable second-row center console on examples with the second-row captain’s chairs. Getting into the third row is a cinch, too, because the second row moves out of the way with just one press of a button. The Pathfinder is also one of the few three-row crossovers that lets you do that with a child seat installed. Once you’re back there, adults will be fine for short trips while kids can do longer drives.

Build quality has improved significantly on the 2022 Nissan Pathfinder. The top-end Platinum, trim feels quite luxurious and nearly everything you touch is padded or soft-touch plastic. Best of all, the level of sound insulation should make the Pathfinder one of the quieter options in its segment even with wide tires.

Rounding things out are much improved driving dynamics. Between the reworked platform and suspension, the Pathfinder drives with a surprising level of confidence. Improved steering feel makes maneuvering a vehicle this big a cinch. Together with the punchy V6 and nine-speed automatic, you get a car that drives better without sacrificing comfort. Yes, its stiffer than before but it’s not to the point that it ruins the ride. In fact, the Pathfinder is one of the more well-rounded vehicles thanks to its blend of comfort, surefooted handling, and V6 power.

The 2022 Nissan Pathfinder is a strong entry in a competitive segment. It checks a lot of boxes and makes you forget all about its CVT-equipped predecessor. You get a lot of value for the money, too, especially with a starting price of $33,410 before the $1,150 destination charge. Even in its most expensive form, the Pathfinder manages to sneak under the $50,000 mark, something many of its competitors have failed to do so. When you that and all of the improvements you get for the new generation, the Pathfinder gets even more compelling.

Stay tuned for a full test when we can get our hands on a 2022 Nissan Pathfinder at home base!

2023 Honda HR-V First Drive: I recently had the chance to spend some time … END_OF_DOCUMENT_TOKEN_TO_BE_REPLACED