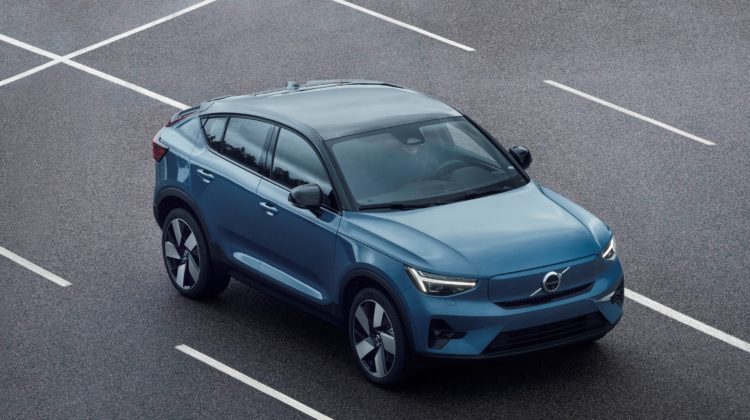 If you thought the 2022 Volvo C40 Recharge looks familiar, well, it is. This is essentially a coupe-like version of the XC40 Recharge and it’s also Volvo’s first dedicated battery-electric model. There are key design changes to distinguish the C40, namely the roofline, which is roughly 3.0 inches lower than the XC40, and that dramatic rear end with the cool rear spoiler. Volvo’s signature vertical taillights get a new treatment, featuring broken LED lines instead of one continuous light strip. Thankfully, the C40 avoids looking like a raised sedan because it doesn’t have a short decklid like the BMW X4 and Mercedes-Benz GLC Coupe. The lower front fascia is also slightly different and the shape of the headlight clusters are also more like partial ovals than squared like in the XC40 Recharge.

Inside, the 2022 Volvo C40 Recharge has a similar interior to its boxier sibling. All of the neat practical features including the bag hook, removable trash bin, and the large cubby under the center stack are all there. You get a unique door and dash trim with different layers finished in varying shades of white, silver, and gray. To further distinguish the C40, you can get blue carpets on four of the seven exterior color options. The C40 is also the first Volvo to get a completely leather-free interior. Instead, you get sustainable vegan upholstery on every surface of the cabin. This coupe-like crossover is the second Volvo model to get Google’s Android Automotive OS, effectively giving it built-in Google Maps, Google Assistant, and the ability to download apps directly to the vehicle via the Play Store.

The C40 is on Volvo Car Group’s CMA platform, which it shares with the XC40 and the Polestar 2. This architecture was built to accommodate standard internal combustion vehicles, hybrids, and battery-electric models. Like the XC40 Recharge and Polestar 2, the C40 uses two electric motors and a 78-kWh battery with a 75-kWh usable capacity. Total output is 402 hp and 487 lb-ft of torque. Since its a dual-motor layout, the C40 has AWD as standard equipment. Expect it to hit 60 mph in under 5.0 seconds just like the XC40 Recharge. On a single charge, Volvo expects the C40 to be able to travel around 208 miles, which is well short of competitors like the Tesla Model Y and even new entries in the mainstream segment like the Ford Mustang Mach-E and the Volkswagen ID.4. Thanks to its peak charging rate of 150 kW, you can charge the C40 from 10 to 80 percent in around 40 minutes. A full charge using a level 2 AC charger takes roughly 9 hours.

You can order a 2022 Volvo C40 Recharge now via Volvo’s consumer site. However, you won’t be taking delivery until early 2022. The C40’s sales strategy is also a departure from your typical buying experience because you have to place an order online. The dealer only manages the delivery process. You can go and test drive the car but you won’t be able to stroll into your local Volvo dealer and buy a car on the spot. Prices for the C40 Recharge start at $58,750 before destination. It also debuts a new trim naming for Volvo. Since the C40 is only available as a loaded model, it’ll be sold in the Ultimate trim. The 2022 XC40 Recharge, on the other hand, will be offered in the more affordable Pure grade plus the range-topping Ultimate.