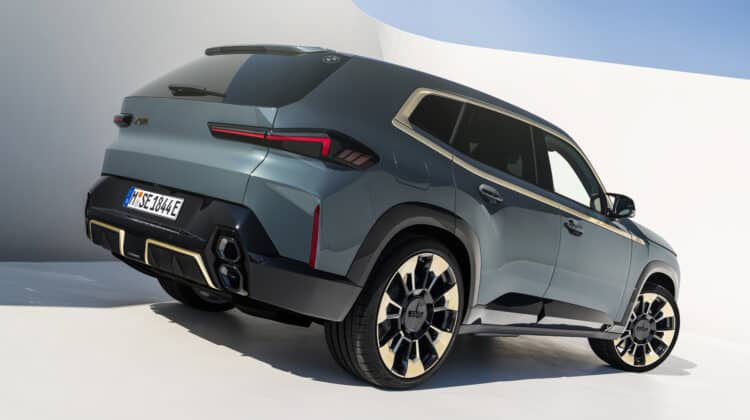 2023 BMW XM Revealed: The concept was met with controversy, but the production model has been met with….a little more acceptance. The 2023 XM is the first dedicated M model from BMW since the 1970’s M1 supercar, and with this all-new model, the brand is going all in on haute-couture design. It may be out there for the average car shopper, but it certainly appeals to those who like bold and, frankly, outrageous styling. About the same size as an X7, the XM eschews that model’s third row seat for a rear end shape that is unique to this car. Instead of one BMW logo in the center of the hatch, there are two at the top of the glass fitted inside two areas that just upward briefly into the ersatz roofline.

Under the hood of the XM is a 644 horsepower, 590 lb.-ft. of torque 4.4L twin-turbo V8 plug-in hybrid powertrain. The V8 alone makes 483 horsepower and 479 lb.-ft. of torque, but the electric components include a single electric motor that makes 194 horsepower and a 25.7-kWh battery. Power is routed to all four wheels via an 8-speed automatic, there will be 30 miles of electric range, and 0-60 mph should take 4.1 seconds. The elephant in the room? This thing will weigh 6,062 pounds and will start at around $160,000. That’s not the pinnacle variant, however. An XM Label Red will arrive next Summer with 735 horsepower and 735 lb.-ft. of torque. The interior isn’t as unique as the concept’s, forgoing the three air vents and grab handle in the dash for a more typical modern BMW theme. The interior trimmings and colors are definitely a step up from the rest of BMW’s crossovers and falls more in line with the recently-introduced 2023 7 Series. The standard model goes on sale early next year.