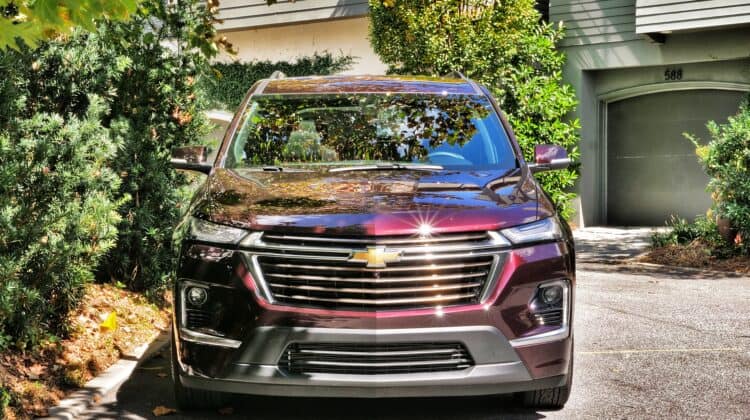 The Chevrolet Traverse may be getting a little long in the tooth, but aside from its aging interior and lack of efficient powertrain offerings, it continues to be the most spacious offering in the three-row family crossover segment with an engine/transmission pairing that actually makes it enjoyable to drive. The High Country trim also comes up short when compared to the highest trims of the competition in regards to value and look and feel. Luckily, the latest Chevy interiors have been really impressive, so the next-generation has a lot of potential to be one of the nicest in the segment. Until we know, the current Traverse does its best to stay in the consideration of car shoppers today.

Even after five years, the Traverse still carries a handsome design with proportions that mask the car’s largest-in-class footprint. The Traverse has the same wheelbase as the full-size Yukon, but is a bit narrower. Before that model switched to an independent rear suspension for its latest iteration, the Traverse actually had a larger cargo area. Its overall length of 204.3 inches makes it longer than even the massive Volkswagen Atlas. This pays dividends for cargo space inside.

The Traverse’s 2022 refresh sharpened things up in the grille and tailgate regions, and 20-inch wheels the largest you can order from the factory. My tester came in the Black Cherry metallic paint, which looked good against the tasteful use of chrome around the bumper, rocker panels, window trim, roof rails and front fascia. The dual exhaust out back is even of the authentic kind, giving the Traverse a powerful demeanor.

The interior design is where you can really tell the age of the Traverse. Where the outside is chiseled, sensible and stylish, the interior is old-school with an infotainment screen that sits uncomfortably low on the dashboard. It makes the widespread move to tablet-style screens feel more appropriate now, as I developed a strong disdain for how much I had to strain my eyes or move my head away from the attention of the road ahead just to look at info on this display. As cool as the secret storage space behind the motorized sliding door may be (this is the last Chevy to utilize that feature), I’d still prefer the screen to be closer to my line of sight, permanently.

Inside is where the Traverse’s size makes it a compelling choice for families who want to haul people and their stuff without stepping up to a much more expensive body-on-frame SUV. With 98.2 cubic feet of space, the Traverse can haul more than anything else in the class with all of the seats folded. With the second and third row in position, there’s 23 cubic feet of space, also best-in-class. In fact, the Traverse has more cargo space behind the third row than every three-row SUV currently on the market aside from the extended full-size offerings like an Expedition Max or a Suburban.

The Traverse is now solely powered by the excellent 3.6L naturally-aspirated V6 found in many other current GM products. Newer versions of those family members are switching to turbocharged 4-cylinders, but it remains to be seen whether the next generation Traverse will follow suit. 310 horsepower is on the higher side for the class, but 266 lb.-ft. of torque is right in line with the remaining V6 options. GM gives this engine cylinder deactivation and automatic start-stop to help with fuel economy, which is rated in this AWD High Country trim at 17 city, 25 highway and 20 combined. It can tow up to 5,000 pounds when properly equipped, but is a porker at 6,160 pounds for curb weight. 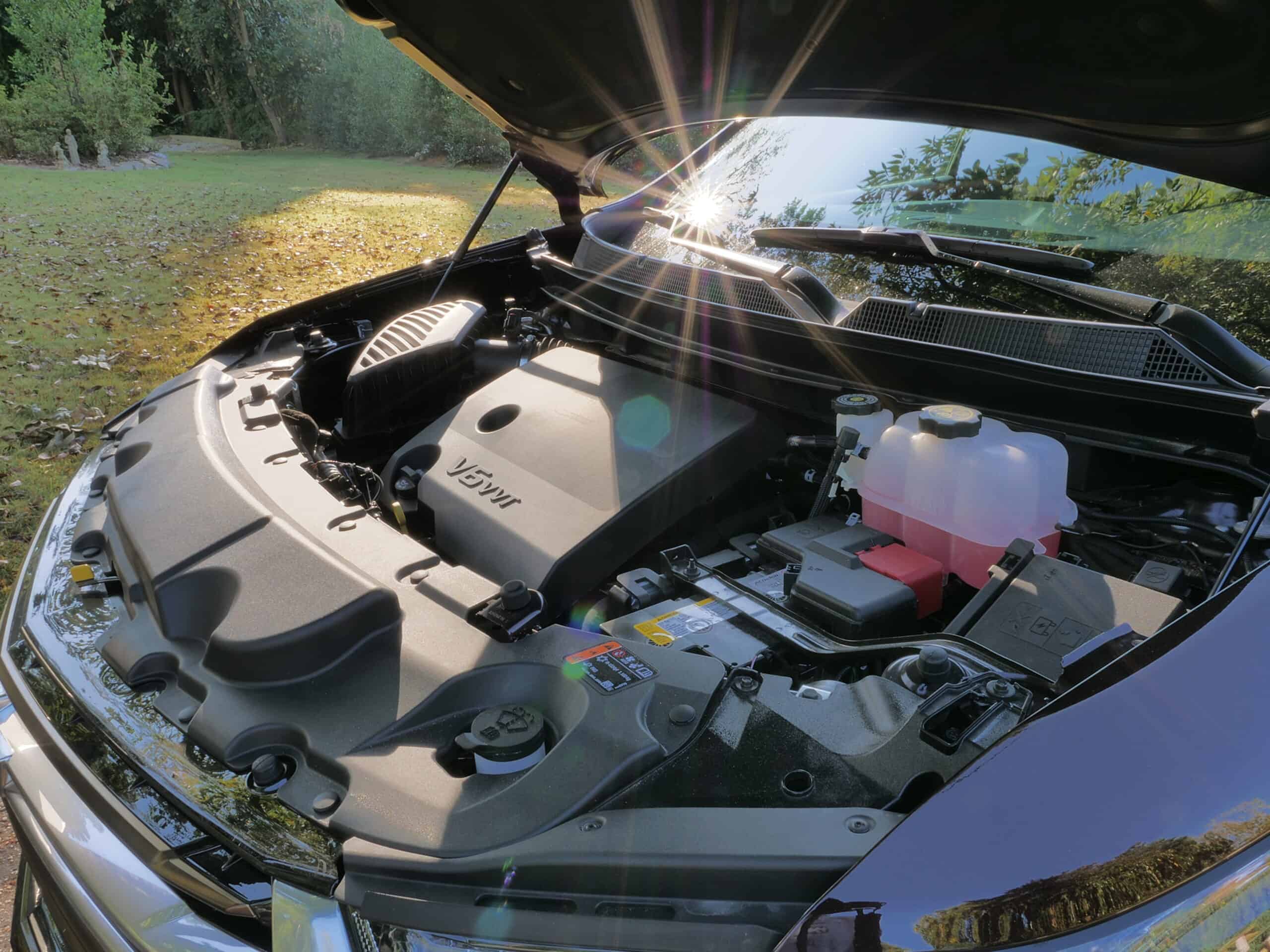 When you get behind the wheel of the Traverse, you’ll definitely notice its heft. This isn’t the lightest thing out there. Making up for all that, however, is this excellent engine and transmission combination. The 3.6L V6 doesn’t have a turbo, so it doesn’t have the most torque out there, but the 9-speed automatic that it’s paired with is the perfect match. It’s such a good transmission that I honestly forget it’s even there sometimes. Shifts are smooth and seamless, staying under the radar most of the time. As soon as you need the power it eagerly downshifts. It really makes this one of the only entries in the three row crossover segment that I actually enjoy getting behind the wheel of.

Acceleration to 60 mph took the Traverse seven seconds flat, which is pretty good for the class. There are some that might do it a hair faster, but those are going to be higher performing or lighter vehicles. This is the only engine option available in the Traverse now (the 2.0L turbo 4-cylinder is no longer available), but I would speculate that it may not be long for this world. GM’s newest 2.7L turbo 4-cylinder found in the 2023 Colorado would probably make a solid and more efficient replacement. The only time the 3.6 feels out of place is when you are cruising below 20 mph. For some reason, down at those lower speeds, the engine noise pierces the cabin in ways it doesn’t at other speeds. At 50 mph, I measured 73 decibels. 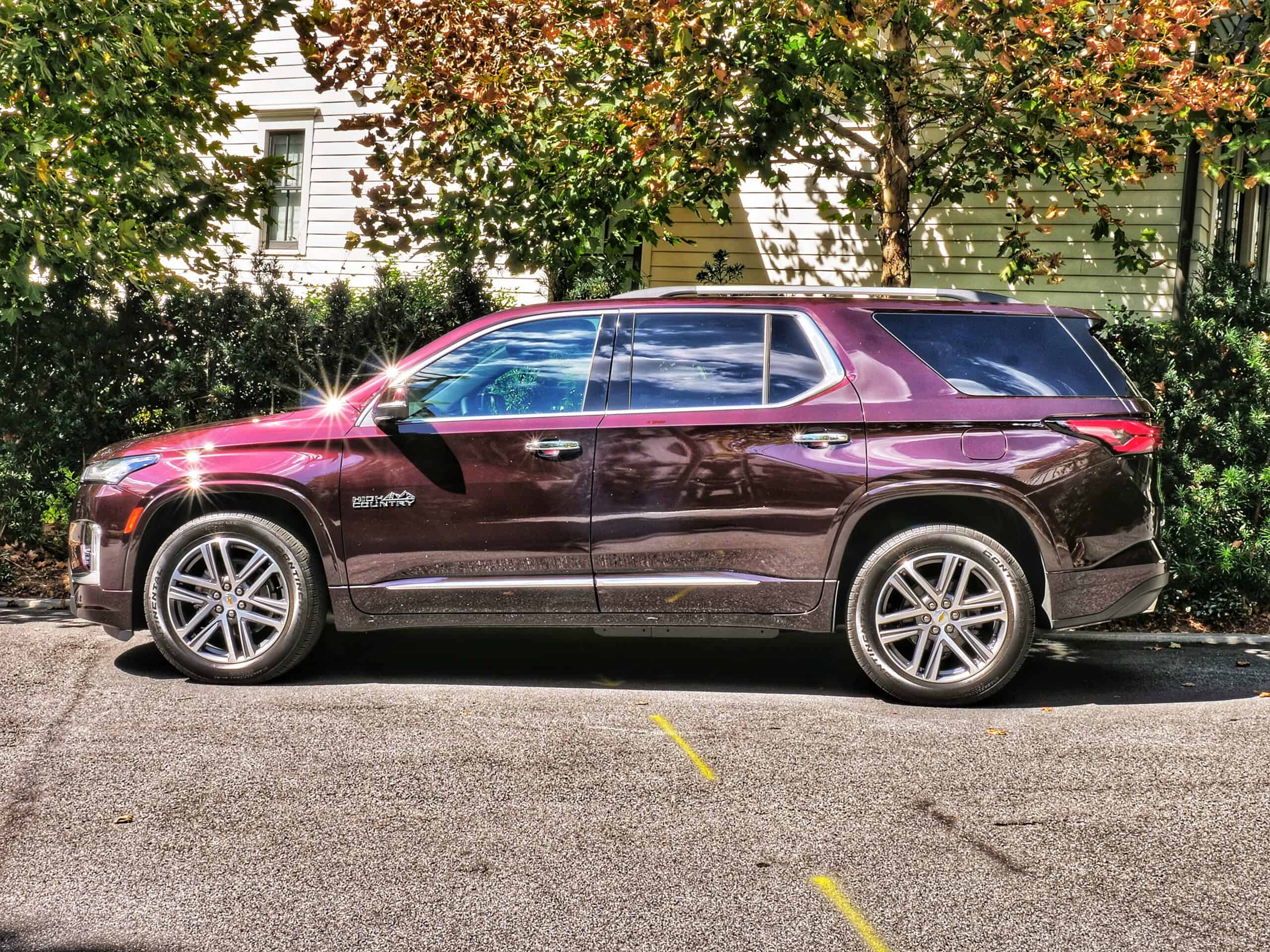 Braking from 60-0 mph takes about 126 feet, which is also pretty competitive for this class considering the size of the vehicle. So, this is a very confident car in terms of acceleration and deceleration, but in terms of handling, it’s pretty par for the course. The tires are grippy enough that you never feel like you’re losing any traction around sharp curves. The steering has a nice heft to it, similar to the Nissan Pathfinder I recently drove. And of course, you have the confidence of all wheel drive at your fingertips with the dial on the console. Like other GM products with AWD, the rear axle can be disengaged entirely for better fuel economy.

The ride itself is also smooth to the point that it reminds me of the Grand Wagoneer I had earlier this year. It just floats over all the bumps and soaks everything up very nicely. Out on the open highway cruising at 75 mph is where the Traverse absolutely shines. Even with these larger wheels on the High Country trim, ride quality isn’t jittery or harsh at all. The only thing I wish it had for highway driving was a more serious lane-tracing assist. This system bounces you off the lane markers when cruising down the highway, another reason why you might want to wait for the next generation. It will very likely come with GM’s Super Cruise hands-free semi-autonomous driving system.

Fuel economy is definitely where things take a hit. I only managed 18 mpg on my 40-mile test loop around Atlanta, and that was with all-wheel drive turned off. But let’s be honest, most of the options in the segment aren’t going to really be that exemplary with fuel economy. You’ll have to look at hybrid and plug-in hybrid options if it’s better fuel economy you’re after, but none of those options (Sorento, Highlander, Outlander) are going to be as large as the Traverse. The only alternative that beats it in size would be a Chrysler Pacifica minivan.

When choosing the Traverse over the competition, you have to decide whether the best engine/transmission combo and largest passenger/cargo capacity in the class make up for its lack of advanced active safety features, efficiency, and a modern interior design. It does everything else it is meant to do very well, but with new competition coming its way in the form of a supersized redesign of its corporate cousin, the GMC Acadia, as well as the anticipated Toyota Grand Highlander, the Traverse will really need to step things up for 2024/2025. Also, considering the price of this fully-loaded High Country trim comes in around $55k, it’s not the most expensive fully-loaded model in the class, but a Hyundai Palisade’s interior will put it to shame at the same price. Bottom line, you won’t be making a huge mistake by choosing the Traverse for your family, but just know that right now you might be able to find a better overall package somewhere else.