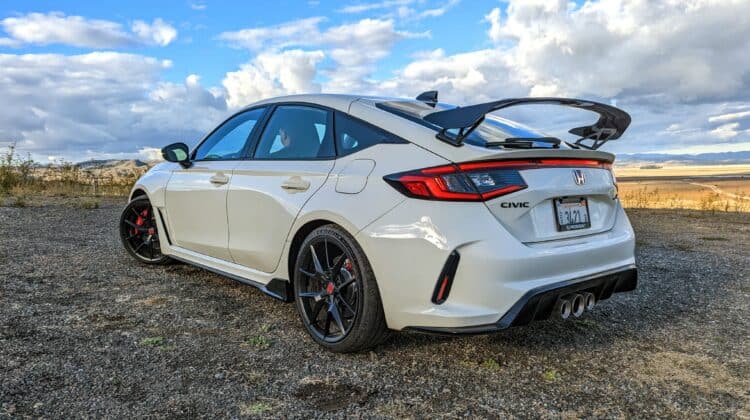 The Honda Civic Type R in its outgoing generation has widely been considered one of, if not the best front-wheel drive vehicles of all time. Honda engineered the hell out of it to make sure it exuded track-ready performance, handling and design, and it certainly had all three. 2017 was the first time North America got its hands on one, but now it’s back for round two. The rest of the world has experienced the Type R experience for generations upon generations, and now they say this one should be the best yet. It is the most powerful Honda-branded product ever sold in North America, and it retains its six-speed manual transmission as the only way to shift gears. How does it stack up against the latest crop of hot hatches and sedans?

Like the outgoing model, the 2023 Type R is hatchback-only, though we’d liken the current Civic Hatchback’s design more to a liftback than a traditional hatchback. That’s totally fine, because this is a great looking car that doesn’t polarize opinions as much as the one it replaces did. The front end undergoes enough alterations to separate it from the standard Civic, and the wing out back, though still large, is more traditional in shape. It appears that removing this one might be a bit easier than the old one, in case you want an aftermarket option.

The red Honda logo proudly reveals the Type R’s sporty intentions, and the triple-outlet exhaust is an active unit with a large valve in the middle unit that you can clearly see opening and closing when in use. That center pipe is now wider in diameter than the outer two, unlike the old car. The 2023 Type R rides black 19-inch rims with Michelin Pilot Sport 4S tires that are 265-mm wide. These are wider than the same tires you used to be able to get on the late Hyundai Veloster N by 30 mm. They are paired with red-painted Brembo brakes. The hood scoop is functional, as are most of the air vents. There just aren’t as many fake ones this time around. 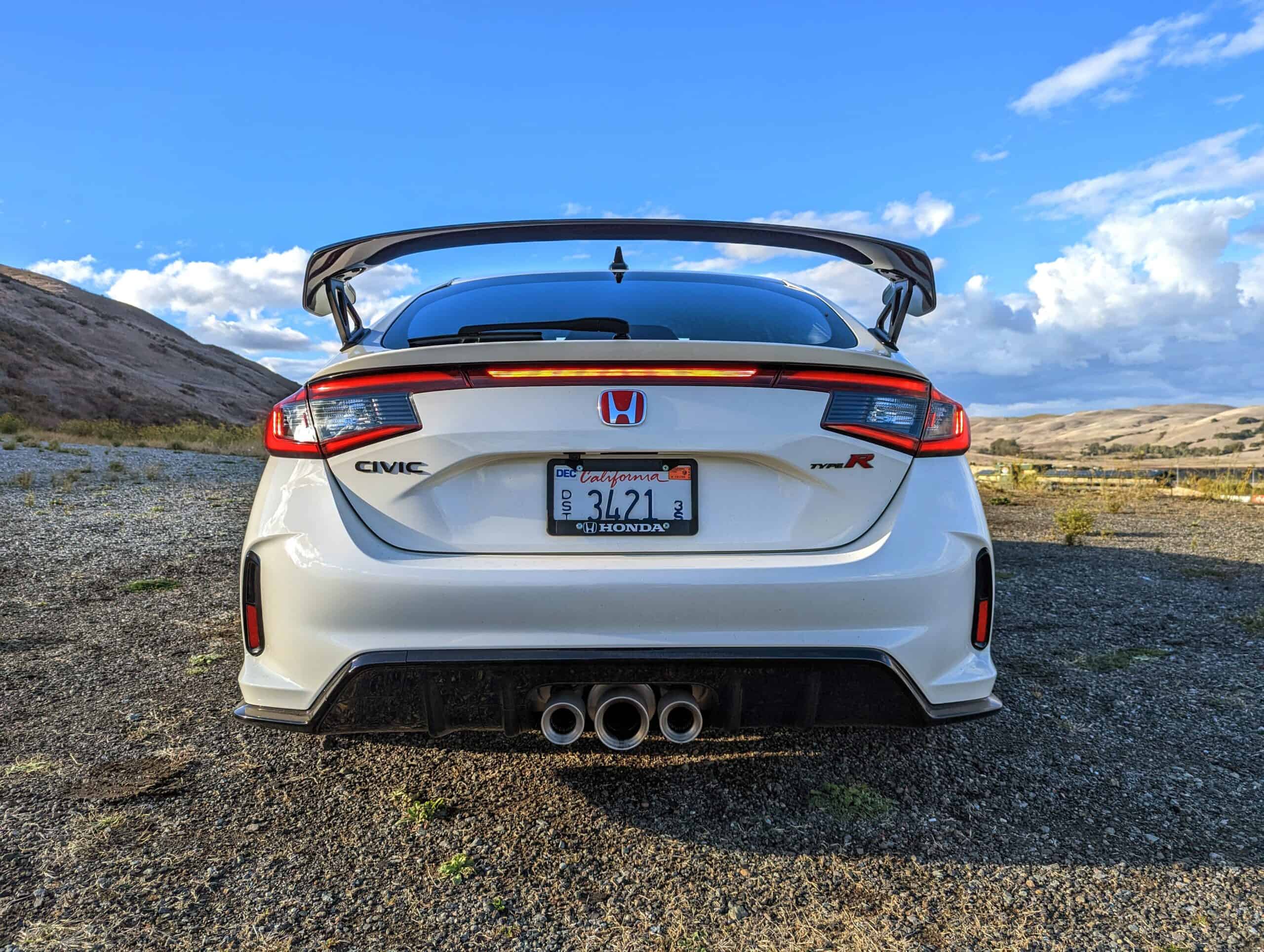 Inside, the Type R shares a lot with the mundane Civic, but enhancements such as a full-LCD instrument cluster with unique screens and gauges help differentiate things. The red sport bucket seats are back, now accompanied by red footwells and floor mats. We especially liked this detail, though it would be nice if the rear seats were also red. At least they get red seat belts.

There is a new interface for tracking lap times and performance metrics that Honda calls LogR. It lives in a dedicated landing in the infotainment system with multiple readouts and gauges, more than you might ever need. New for 2023 is also the +R drive mode, which puts every dynamic variable in its most aggressive setting. As a nod to modernity, there is now an electronic parking brake in place of the old hand brake. The six-speed manual shifter, however, has a metallic finish that is a little slippery during spirited driving.

The Type R earns a lot of its credit from the ferocious K20C1 2.0L turbocharged 4-cylinder engine that makes it go, so it’s back with a few enhancements. There’s a larger turbocharger and updated intake manifolds and various other internal bits. Total system horsepower is now 315, torque is 310 lb.-ft. This makes the 2023 Type R the most powerful Honda ever sold in North America and the most potent Civic Type R ever. 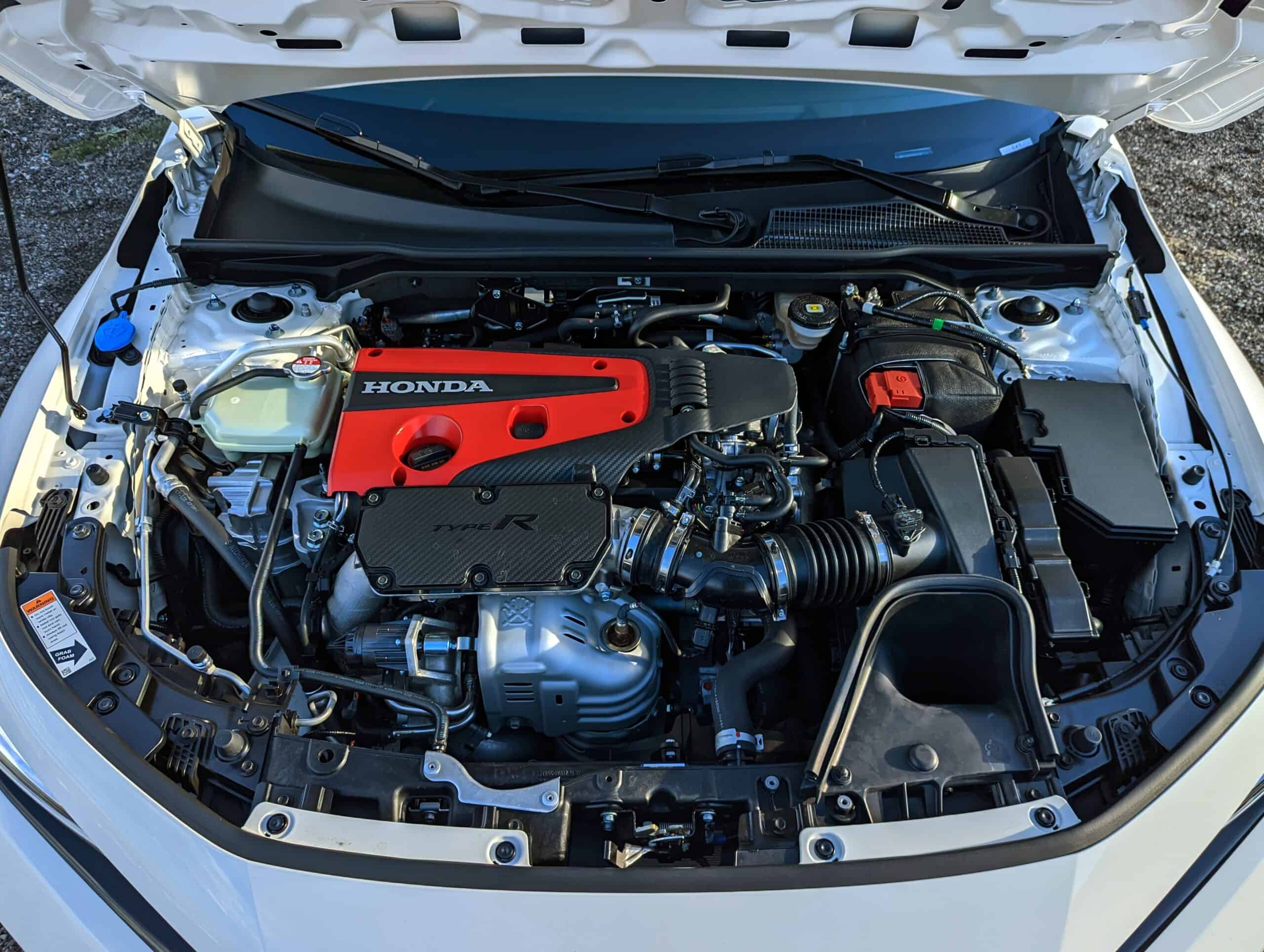 Do all of the updates make for a better-driving Type R, though? To preface, we were flown to Napa Valley, California to experience the car on both twisty canyon roads and typical small town streets, as well as the track at Sonoma Raceway. The catch? It rained the day before, leaving the journalists who drove that day with a more lackluster experience while we had to deal with damp surface conditions.

The canyon roads proved to be the car’s more natural habitat. Judging its performance on this first drive, we suspect it will be able to get from 0-60 mph right around 5 seconds if you’re willing to roast the clutch. If not, think closer to 5.4-5.5 seconds. As far as 60-0 mph stopping distances go, it is likely going to come in around 100 feet because of the seriously wide tires. We definitely noticed the front-wheel drive nature of the car because of the damp roads, however. There was a bit of front-wheel hop when accelerating out of corners both on the canyon roads and on the track. The steering is not quite as engaging as the previous car, as there was a little bit of numbness. Nevertheless, it’s still very precise and, even with a tiny hint of torque steer, gobs and gobs of fun.

There is one thing you should know about this Civic Type R, however. The ride quality is pretty firm. Even in the comfort mode, it is as bouncy as a Hyundai N car in its most extreme N mode. So, if you’re looking for a daily-drivable vehicle, you might want to look at something tuned a little bit softer, something like the new GR Corolla. If you engage the most aggressive drive mode, +R, things get even firmer. For most mountain drives, it is probably best to put it in the Individual drive mode and keep the suspension either in Comfort or Sport. The track is where its stiff ride actually comes in handy.

Say you want to slow things down and drive a bit more relaxed. The cabin is likely as quiet as the regular Civic, but with a nice sporty exhaust note. It’s not too boy-racer thanks to the new active exhaust system, but it certainly isn’t as grin-inducing as the Hyundai products with their pops and burbles. Fuel economy is a little bit difficult to talk about because, of course, we were driving like a moron out on the winding mountain roads. If you treat it gently, you’re probably going to manage mid-20 MPGs.

The track was where we really got to scrutinize the pros and cons of the engineering efforts Honda put in this time around. Pros? Noticeably less turbo bog and easier launches than you get in an all-wheel-drive competitors like the Golf R, WRX, or GR Corolla. All of those will experience some turbo bog when launching in first gear. Con? You get a lot of front wheel slip when launching the Type R. Around the corners it also feels heavier than some of the competition, most notably the GR Corolla. As far as refinement and control goes, the chassis is really well tuned and the suspension is pretty perfect for track duty. So, if you’re doing autocross things, this is going to be just fine, but its size may feel more bulbous compared to the tighter dimensions of the competition. This Civic is going to be a bit more fitting on bigger tracks like Sonoma Raceway.

No problems were noticed with the braking or the cooling of the engine. Cooling has been significantly improved in this generation and the Brembo brakes are the biggest brakes the Civic Type R has ever had. So, if you’re worried about that because of the previous generation, you’ll definitely want to give this one a try. Keep in mind, though, it has gained about 100 pounds versus the outgoing model.

Perhaps the best way to describe the new Civic Type R is that it feels more mature and more grown-up than the previous one. Some folks are going to love that, but a decent number of Honda fans actually might find that to be a problem. If you want something that is more of a raw experience, you’re probably going to want to take a look at one of the Hyundai N cars. They do feel a little bit more pure and engaging, depending on exactly what you want out of your vehicle. This is certainly going to be faster than those models when equipped with their manual transmissions. It’s even likely going to handle better, but the amount of connection that you have with the machine is a little bit diminished here. Also, don’t forget that the rest of the competition all offer automatic transmission options that widen their appeal and make for faster straight-line experiences. Honda wanted to keep the Type R exclusive to the purists of drivers, placing it at the top of the minds of front-wheel drive performance enthusiasts. We can’t wait to get one home to test out completely.