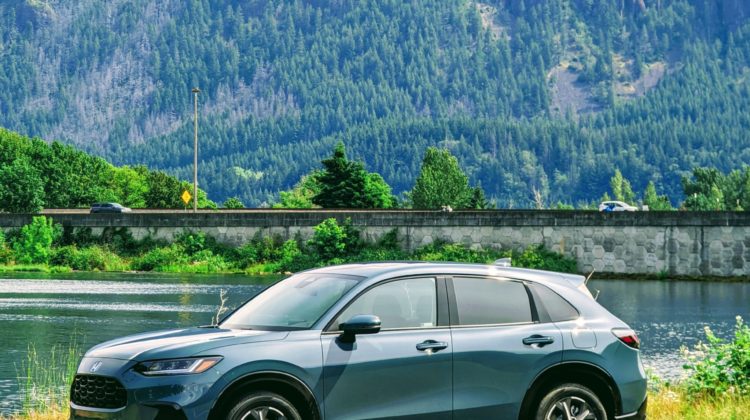 2023 Honda HR-V First Drive: I recently had the chance to spend some time behind the wheel of the second generation U.S.-spec HR-V in Skamania, Washington. Though it is longer, wider and more comfortable inside, it did lose a little bit of practicality in its switch from the Fit platform to the Civic platform. For example, the ‘Magic Seat’ second row that was borrowed from the Fit is no longer here because Honda felt it sacrificed passenger comfort. Cargo space, as a result, is also down a bit. The second row simply cannot do the gymnastics it could in its previous life. What it lost in flexibility, it made up for in seat comfort, however.

The new HR-V is a larger and more mature-looking car than before. It is longer and brings about more noticeable front and rear overhangs. The nose is like nothing we’ve seen from Honda and a lot like what we’ve seen from Ford. The rear hatch has a more dramatic angle to it with an overall design that brings back memories of the first-generation Acura RDX. The wheels sizes range from 17-18 inches and look a little too small for the car in photos. Seeing it in person does wonders, though, as this is still a tiny little thing but the wheels look more appropriate in the flesh. The side profile is a pretty generic shape and doesn’t do much to stir the soul, but that’s okay. I do wish they had given this top-of-the-line EX-L model a flashier look up front, as all models look like base models to me due to the lack of chrome or fog lights.

The interior is derived from the newest Civic, with a tablet-style touchscreen sitting high up on the dash. Many people I have talked to say they prefer how the previous Civic and HR-V integrated the screens better with the dashboard, and I would have to agree. This trend isn’t going away anytime soon, though, so it’s best to just ride the wave. The horizontal mesh honeycomb trim that spans the dash incorporates the air vents like the Civic’s does. Unfortunately, the cool joystick knobs that direct airflow in that car are merely normal tabs in the HR-V.

The steering wheel is the same as the Civic’s, which in my opinion is a downgrade from last generation. The buttons for controlling audio and cruise control feel a bit chintzy compared to many competitors’. Behind the wheel is a partial-LCD instrument cluster that leaves a traditional analogue gauge on the right to handle speed duties. The screen on the left makes great use of its real estate and displays a number of different screens including audio, AWD torques distribution, and more. It is much better executed than what the top Corolla Cross or Kia Seltos can muster. 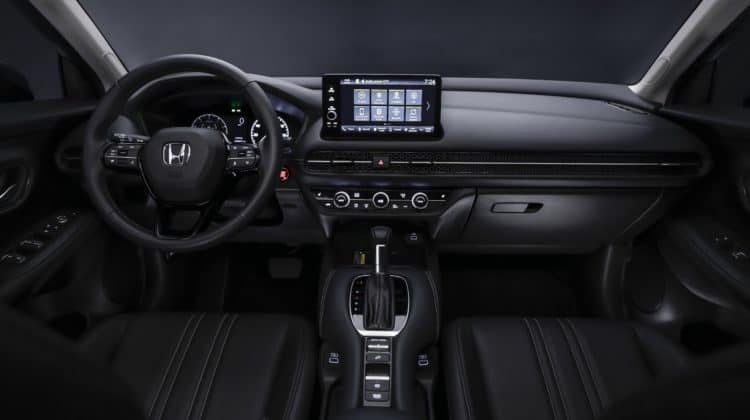 There is a brand new engine under the hood. The 2.0L 4-cylinder from the base Civic is the only option and makes 158 horsepower and 138 lb.-ft. of torque. That might not sound like a lot (it really isn’t), but it is an improvement over the outgoing car. Somehow, the tuning of the CVT transmission and the way this car rides makes the engine much more acceptable in the HR-V than it is in the Civic. This surprised me a great deal considering, of course, that it weighs more. I did not test 0-60 mph at the event, but I’m betting it is around 8 seconds or so. It’s still not a fast car, but it will handle around town driving just fine. Hopefully Honda has the the gall to offer a hybrid with more power in the future like Toyota just did with the Corolla Cross. That car is a direct competitor to this and offers more options than ever before thanks to that new powertrain. It will likely also be more fuel efficient than the HR-V, though we will need to test it for a full week to find out.

The overall driving experience is near the top of the class as well. It is an agile car but the narrow tires lack grip and really let it down. LX and EX-L models like the one I was driving ride on 215-mm tires. The Sport trim gets 225-mm rubber, but that probably doesn’t make too much of a difference. Otherwise, the car is tuned more on the comfort side than the sporty side with a plush ride that absorbs all of the average road imperfections. It is super duper comfortable (save for the lack of adjustable lumbar support on any trim) and easy to drive. Like other Honda’s, however, cabin noise is somewhat of a sore spot. Wind noise from the A-pillars is noticeable, as is the noise emanating from the front tires. I measured as high as 85 decibels at 50 mph, though the average was closer to 79.

At the end of the day, the new HR-V is a perfect option for those who want a Civic hatchback but need AWD. Stay tuned for a full review in the coming months!