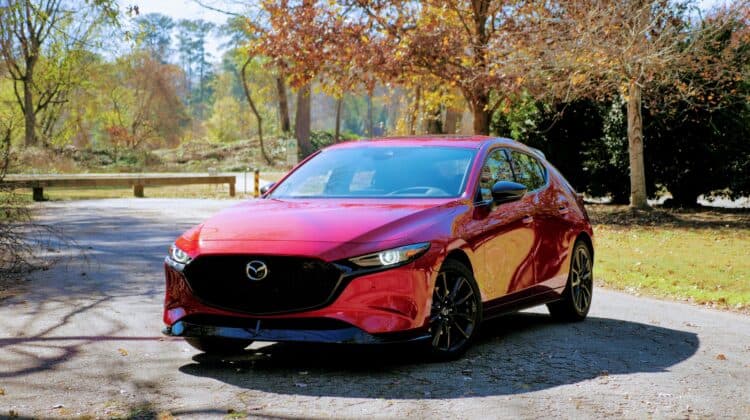 The Mazda3 has a few controversial elements that, after a week behind the wheel with, I determined were actually pretty insignificant. The hatchback’s design, the infotainment system, the torsion beam rear suspension – all points of contention for a lot of people out there. Styling may be subjective, but driving this car every day reveals that Mazda is truly on the right track to becoming a premium brand. In fact, they are already surpassing a lot of the competitors in a few areas.

The Mazda3 Hatchback’s design has been splitting opinions since it was revealed in 2018. A well-executed production translation of the Kai concept, it unfortunately lost that prototype’s hips, leaving it appearing awkward to some. The c-pillar is too big for others. To me, this is the best-looking car in the class without a shadow of a doubt. It doesn’t look like a $30,000 car and a sporty and premium persona thanks to the long hood and darker grille elements. The Premium Plus trim adds the black spoiler and the lower front dam that gives the car a lower look. The wheels are 18 inches in diameter and fill out the wells just alright, I think 19’s would be better though. 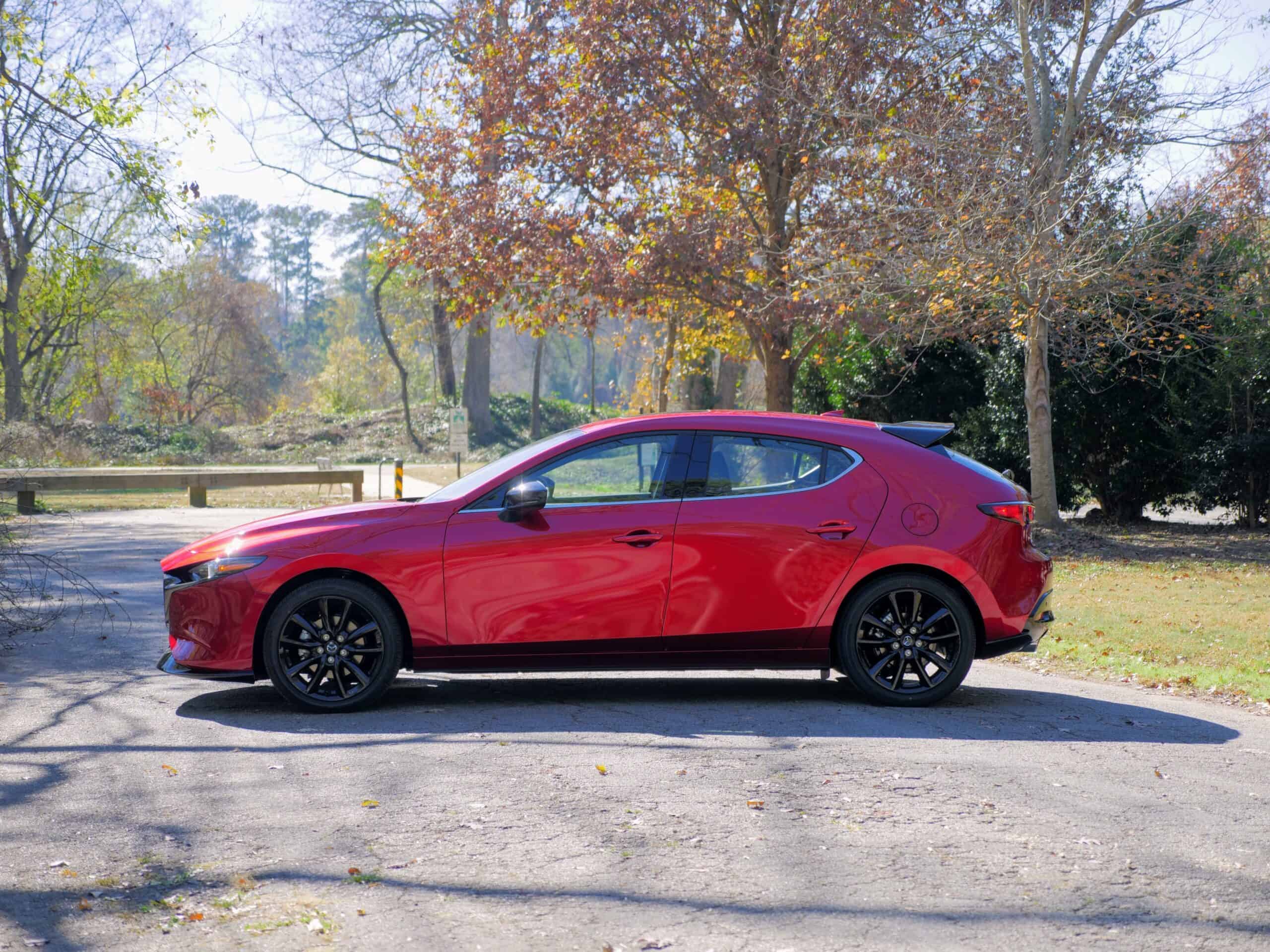 Other details like the all-LED exterior lighting and the way the turn signals fade after each illumination instead of abruptly turning off elevate the car’s vibe even further. Soul Red Crystal is one of the best reds in the industry. From the back things can get a little too bulbous depending on where you’re standing, but the overall design still exudes class unlike any other “economy car” out there. No harsh creases or hard angles, everything is smooth and butter-like. 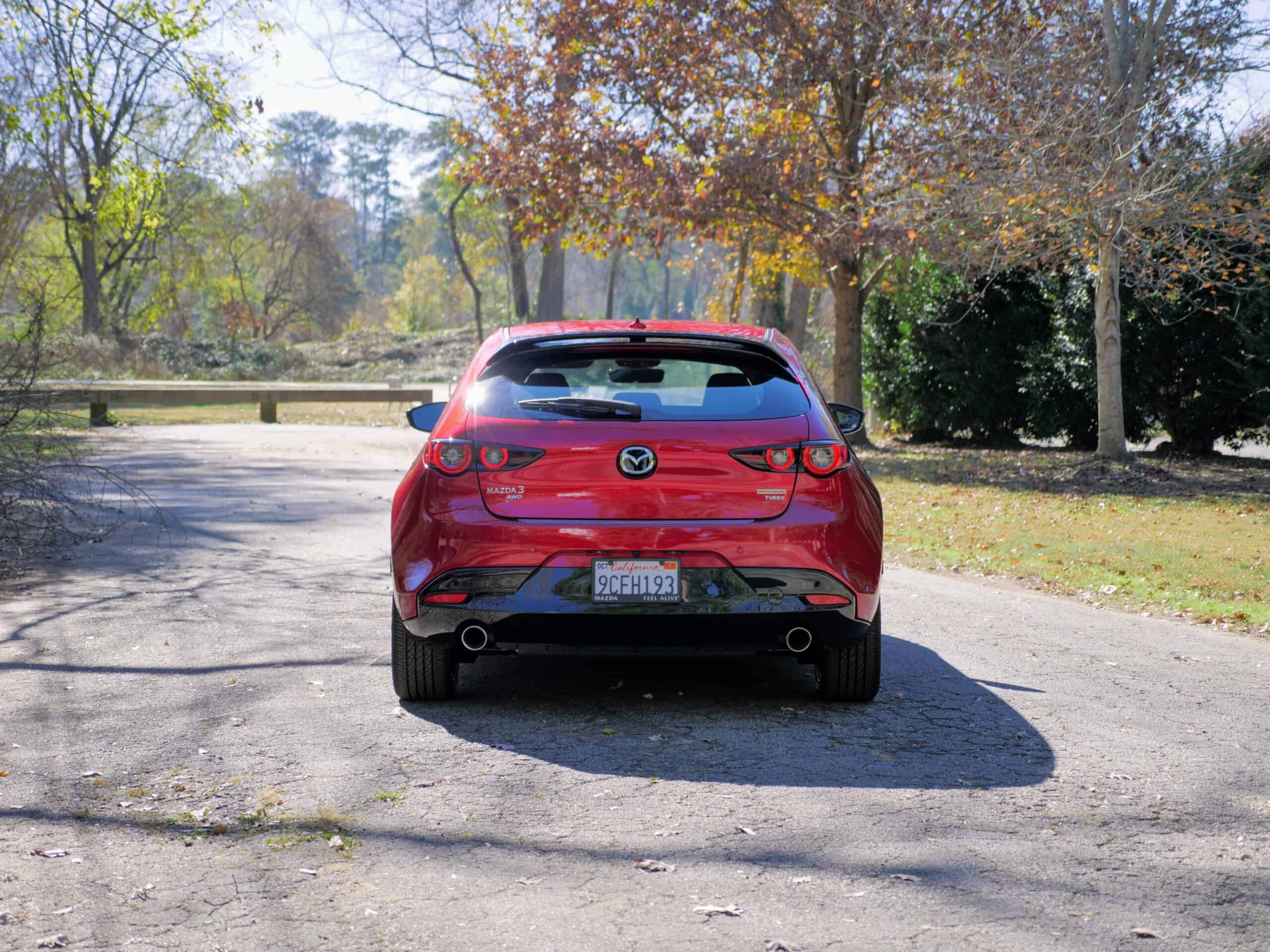 If the exterior doesn’t convince you that Mazda is on track to become a true premium brand, the interior might. Even in all-black, the design of the dashboard is elegant and artful. The steering wheel is the perfect size with a minimal footprint that still manages to hold a lot of functions. The instrument cluster is a mix of digital and analogue, though a full-LCD example would be welcome. The console area is, unfortunately, dressed in piano black plastic trim, so scratches will build up rapidly over time. Otherwise, 90% of things are screwed together nicely.

Mazda touts its ‘Jinba Ittai’ philosophy as the reason its front seats are so comfortable and devoid of fatiguing pressure points. I found the driver’s position to be perfect. On a long road trip they never wore me out and were appropriately adjustable. The passenger seat does not enjoy the same level of movement, though. With the rest of the interior, the only spots where I found creaks or sub-par construction were in the armrest hinge and the passenger door handle. On the bright side, I ended up really enjoying Mazda’s rotary control knob. After a week with it, you learn how many clicks and turns it takes to get to the buttons and features you most commonly use. It honestly becomes far less distracting to do than reaching up and touching the screen, which is really too far anyway.

Cargo space is far from class-leading, but is still more than the sedan and more than you might initially expect. The second row spilts and folds in a 60/40 fashion, and the tonneau cover can be easily folded up and stored. When they’re up you have just over 20 cubic feet of space to work with. Fold them down and that shoots up to about 47. The opening of the hatch makes it more difficult to put taller items in the way back when loading the car up, and there are no handles to remotely stow the second row from the trunk. 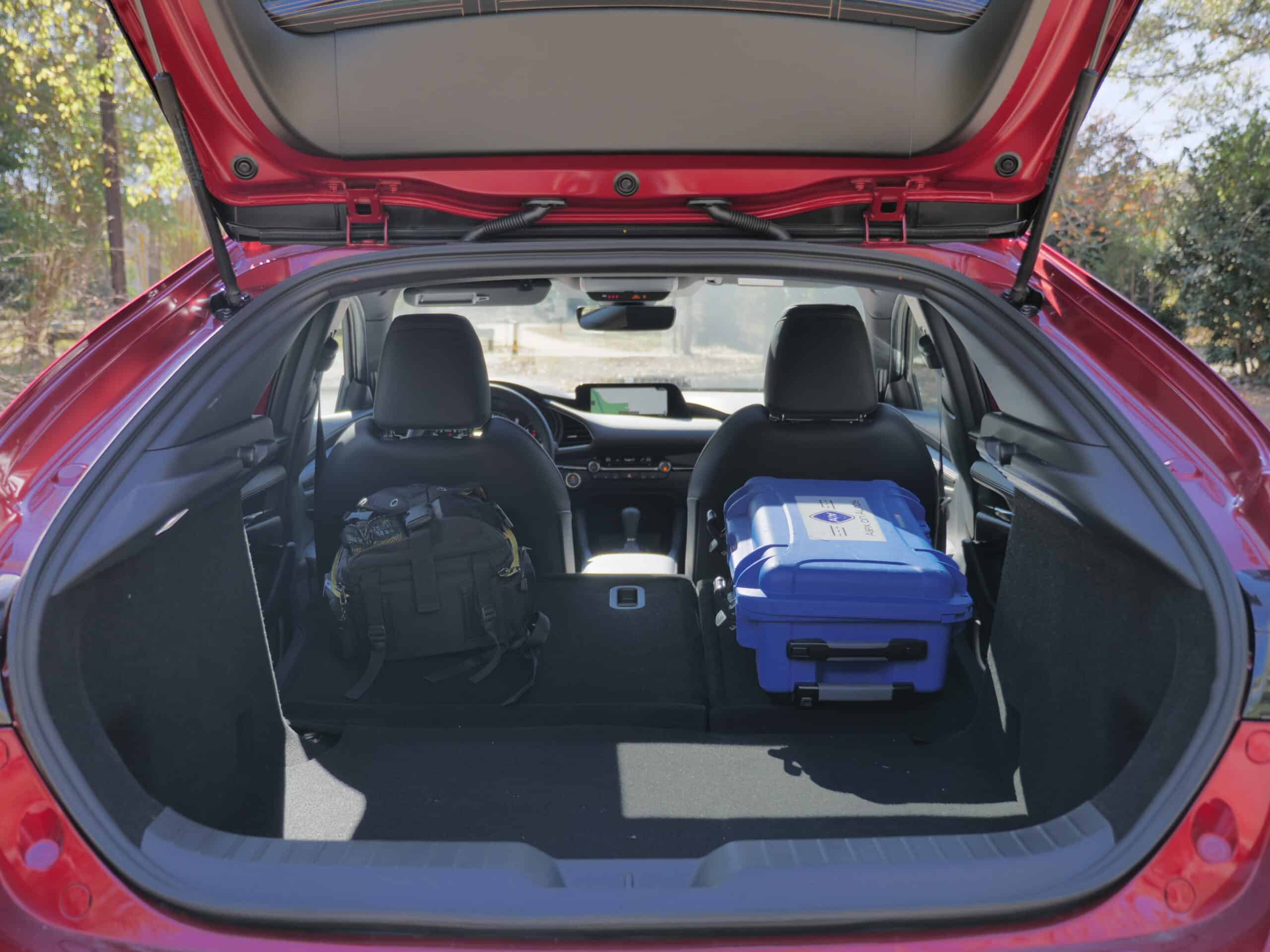 The Mazda3 Hatchback is available with two engines. The originally-promised diesel-like Skyactiv-X still remains unavailable on our shores, however. Don’t get your hopes up that it will ever make it here. Alternatively, the base engine on tap is a naturally-aspirated 2.5L 4-cylinder making 191 horsepower and 180 lb.-ft. of torque. That’s class-leading performance-wise, with another twist: it’s available with a manual transmission. AWD is also available, but only with the automatic. The larger turbocharged engine that my tester was equipped with is only offered with AWD and is the most powerful option in the segment at $32k starting. Fuel economy is not exactly the priority with this engine. If you fill with premium gas, the car makes 250 horsepower an 320 lb.-ft. of torque. Drop the horsepower figure to 227 with the regular stuff. Fuel economy is rated at 23/31/26 city/hwy/combined. 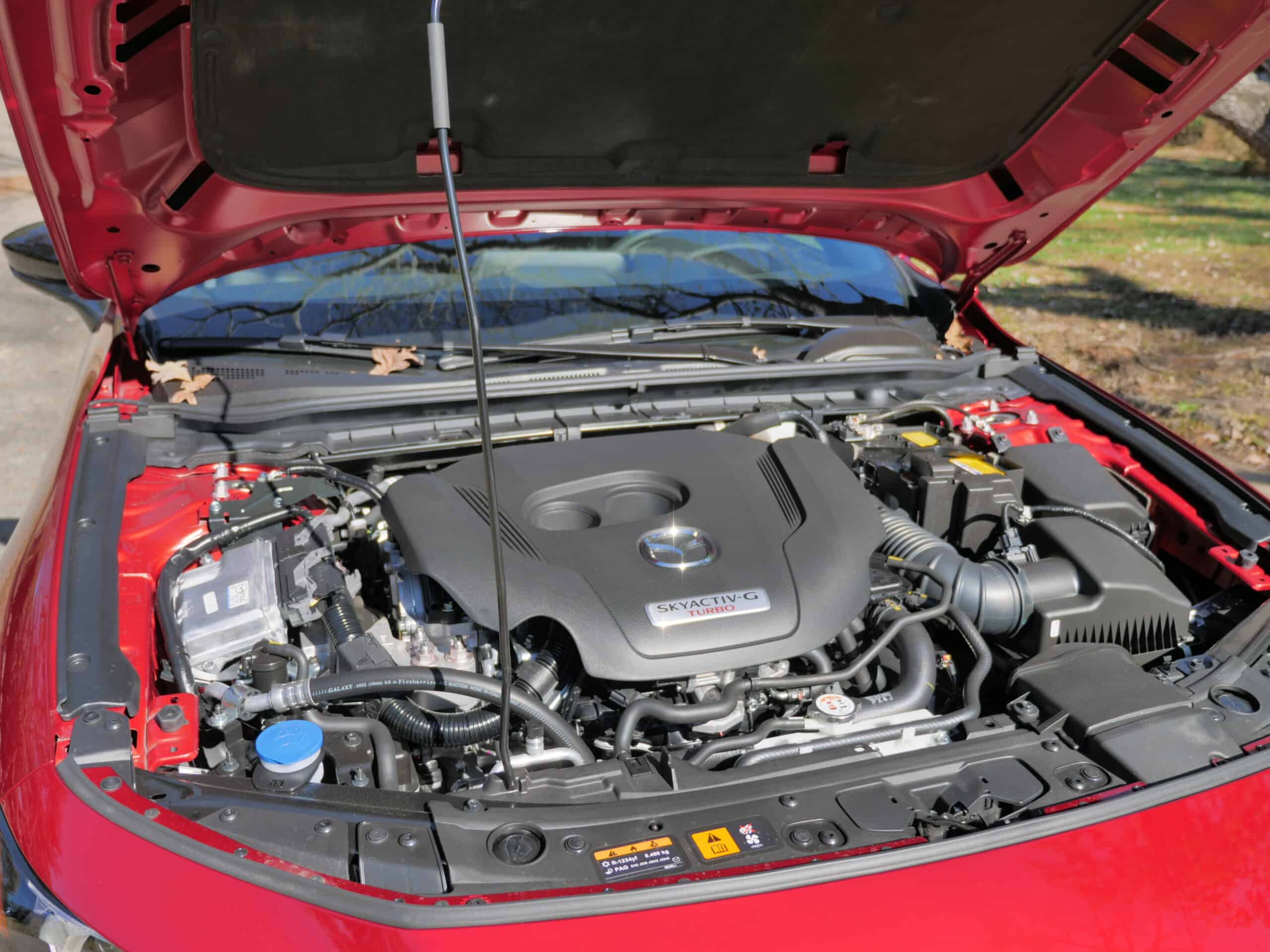 No major changes have been made to the Mazda3 since Alex tested an identical spec a few years back. Trust me, I wish they would have given me a lower trim, too. Because of this, I’ve been experiencing pretty much the same exact driving dynamics as the car from his review, which you can find here on the site or here. Even with the rather narrow tires, grip is well-managed on throttle and accompanied by a lovely engine note. There are some augmented sounds coming through the speakers to supplement it, but the combination sounds very good. Having now driven this engine in the ‘3 and the CX-30, I can confidently say that this is my favorite sound from a 4-cylinder engine outside of the true hot hatch realm. What’s the difference between the Mazda3 hot hatch realm and the ‘true’ hot hatch realm? Maturity. This thing is quick like a Veloster N, but it handles its speed with more grace and serenity. It’s a more grown-up hot hatch, one that needs a lighter touch once you push it to 7/10ths. That’s where the rear suspension and tire combination really limit this car.

Surprisingly, I actually never once yearned for a more modern transmission, one with more gear ratios or even one of the dual-clutch variety. If you put the ‘3 in Sport mode, the transmission hustles with the most vivacity its dogged age can muster. Then again, I just can’t help but wish it used GM’s 9-speed automatic. Have I established that I love that transmission yet? Luckily, this 6-speed is more than acceptable for this kind of hot hatch. Acceleration is linear and strong, taking a confidence-inspiring 5.8 seconds to get to 60 mph. Braking remains less than class leading, taking 120 feet or so to stop from 60 mph. Luckily, the brake travel itself has a smooth and linear feel that always provides the perfect amount of resistance. There’s no dead gap at the top, no sponginess on the way down.

Mazda, as you all probably know by now, did not put an independent suspension in this generation of ‘3, or the Mazda CX-30, or even the all-new CX-50 which just went on sale last year. As a result, if you do push this relatively hard “(7-8/10ths) through a corner and hit a pothole in the pavement, the rear end will skip and hop a little bit. Evaluating rear passengers’ heads, however, reveals that the rear suspension actually keeps jostling to a minimum the majority of the time. It strikes a very appealing balance, allowing the ‘3 to still be fun and nimble to a certain point, while simultaneously providing a supple ride on nicer pavement. You’re not taking this car to the track, are you? If so, maybe think about swapping out the wheels for ones that can accept wider tires. That’s where this car is mainly let down. If I were to pick one of those two issues to deal with as a regular consumer who is going to use this thing realistically, I’d keep the suspension and maybe try the upgraded tire thing.

Also, if you’re driving on the highway or just in general around town, the adaptive cruise control and lane departure warning systems work very nicely together. They’re not too intrusive and sound reminiscent of the bites you’d here on Gran Turismo or some other Japanese video game. Cabin noise is otherwise pretty darn impressively low. I measured 65 decibels at 50 mph. You mainly hear road and tire noise until you give the engine some inspiration. I love the sound it delivers then and appreciate the way it settles down when cruising. Fuel economy is, of course, where the shortcomings of this old 6-speed automatic come into focus. I only managed 23 mpg in my 40-mile test loop around Atlanta, which is a good mix of city and highway driving. However, on my road trip up to the North Carolina Mountains during the traffic-free four-hour highway segment, I actually scored closer to 30 mpg. As always, your mileage may vary.

It’s no surprise that I am a big fan of this car. There are only a few tiny things that irk me about it, but most of the qualms the enthusiast community tends to have with it can be rectified by a long-term test drive. The Mazda3 becomes such a compatible experience that it feels like putting on a perfectly-fitting glove. It looks good to me on the outside and feels great on the inside. Its balance of agility and superb ride quality make it the grown-up hot hatch. Zoom-Zoom with a blazer on.

There are only two trim levels available with the turbo – 2.5 Turbo and 2.5 Turbo Premium Plus. Fully-loaded a Premium Plus cashes out at just below $37k. The lower end of the range starts right at $32k. A more civilian Mazda3 Hatchback can be had for as low as $24k. If you want the manual, that is only available on the 2.5 S Premium trim at $29k. AWD on the non-turbo costs just over $31k. I think this is a nice and manageable spread, one that allows you to drive around in a car as nice as the nicest Acura for the cost of the nicest Civic.