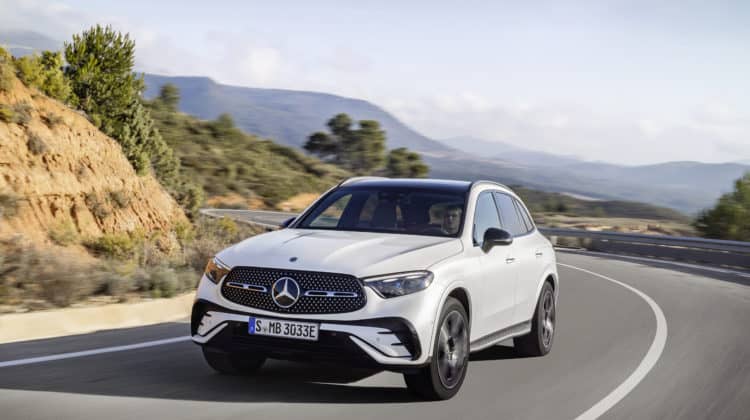 The 2023 Mercedes-Benz GLC SUV has been revealed. Keeping the overall design somewhat similar to the outgoing model, the second generation has grown in a few key areas. Length has increased to 185.7 inches with a 0.6-inch longer wheelbase. Overall height actually decreases by a little over a tenth of an inch, which you can see in the more raked silhouette this time around. Inside, cargo capacity behind the second row has increased by 1.8 cubic feet to 21.2 total. The coefficient of drag has dropped to an impressive 0.29. This all only applies to the SUV body style, as information on the Coupe has not been shared just yet.

The GLC will launch in the U.S. as 300 and 300 4MATIC (AWD) flavors. We know all future AMG variants (including the 63) will be powered by turbocharged (and electrified) 2.0L 4-cylinders. That’s exactly what powers the base model, too. A 2.0L turbocharged 4-cylinder mild hybrid with 48-volt technology and an integrated starter-generator will make 258 horsepower and 295 lb.-ft. of torque. A plug-in hybrid variant will be joining the lineup in the future as well.

The interior adopts the slanted touchscreen setup with MBUX voice commands and optional augmented reality navigation seen in EQS, S and C. In ‘off-road’ mode, the GLC can display a “transparent hood” in the central touchscreen. The 360-degree cameras provide a view under the front of the vehicle, including the front wheels and their steering position.