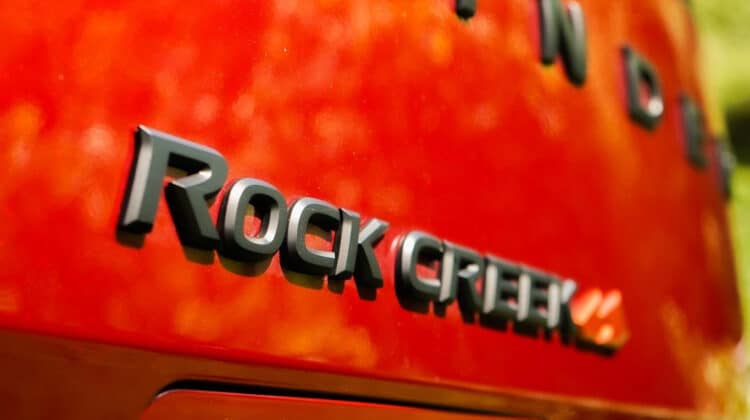 Most automakers today are in the crossover game, for better or for worse. Nissan has enjoyed a long history of moderate success with models like Rogue, Murano and this, the three-row Pathfinder. The all-new fifth generation continues to be a unibody crossover with a front-wheel drive-based platform like the one it replaces. However, it swaps out the CVT transmission that caused a softening of the nameplate’s image. Fun fact, the fourth generation was actually not the first time Pathfinder went the unibody route. Generation two also experimented with the idea, though generation three went back to being body-on-frame. For generation five, model year 2023, Nissan joins the increasing number of carmakers who want to offer customers the chance to go a little further off the beaten path in their family vehicles. Sometimes these efforts are purely cosmetic, other times we get vehicles like the Pathfinder Rock Creek. Unlike the ‘Rock Creek’ appearance package offered previously, this variant actually benefits from legitimate off-road-focused upgrades. Those upgrades help make the Pathfinder one of my favorite options in the three-row family segment, read on to see why!

The latest Pathfinder is already a solid foundation for design in this segment. Reverting back to a tougher design after the previous generation looked like melted butter, it looks much closer to the  boxy first through third generations. Add on the Rock Creek upgrades, and not only does this become the best looking Pathfinder, it actually starts to look like an Xterra. Let’s go over those upgrades, shall we?

The Scarlet Ember two-tone paint that mine came with absolutely popped in the sunlight. The blacked-out grille looked properly sporty and rugged. The roof rack gave the car added height with capability on the side. Rooftop camping, anyone? The 265/60 tires from Toyo filled the wheel-wells quite nicely, though the 5/8″ of added ground clearance isn’t necessarily noticeable. Normally I am not a fan of how Nissan has ‘PATHFINDER’ spelled out across the entire width of the tailgate, but the placement of the Rock Creek badging below it helps fill the space. Down below, there is a full-size trailer tow hitch with a seven-pin connector. Real towing can take place back here, as the Rock Creek can tow up to 6,000 pounds. That’s a pretty impressive figure, all things considered.

Though lacking a sunroof of any size, the interior of the Rock Creek retains the standard Pathfinder’s positive traits. The one-touch sliding second row seat which makes access to the third row the easiest in the business is here. So is the logical dashboard layout with controls for the rear A/C that are unique in their simplicity of use. There i a good bit of piano black trim, so you will have to deal with smudges and scratches. This is not unique to the Rock Creek, however. What is unique to this trim are the black leatherette/fabric seats with Rock Creek embroidery and orange contrast stitching. You’ll find the stitching on the seats, steering wheel, instrument panel, center console and door panels.

Build quality and fit-and-finish are in line with what you’ll find in other recent Nissan products. Nothing rattles, everything fits together like it should. The Zero Gravity front seats are comfortable, though not excessively plush. All-weather rubber floor mats help keep mud from the river or sand from the beach at bay. Everything is durable without feeling too Fisher-Price. The Intelligent Around-View monitor was the only standout feature of the infotainment system. It really came in handy when taking the Rock Creek on the overlanding/off-road trails. Otherwise, this trim does not come with built-in navigation, only wired Apple CarPlay/Android Auto. The center console is flanked by Nissan’s new electronic shifter, which I admittedly had some difficulties putting into Neutral the first time. South of that is the multi-terrain select dial with seven different settings for various road or off-road situations.

The Pathfinder Rock Creek utilizes the same 3.5L V6 as the other trims, but it is the only one that bumps horsepower and torque by 11 units each when you fill it with premium gas. While the difference isn’t necessarily noticeable, its 295 horsepower and 270 lb.-ft. of torque are more competitive numbers for this class. Rock Creek also comes standard with Nissan’s ‘Intelligent 4WD’ and 9-speed automatic with seven drive modes for on- and off-road situations. This is not a true 4WD system, as there is no transfer case. It is, however, a competent all-wheel drive system that alters the front and rear torque distribution based on slippage and which drive mode you put it in. The mud/rut and sand modes move the split closer to a consistent 50/50. Otherwise, the front wheels are doing at least 90% of the work. 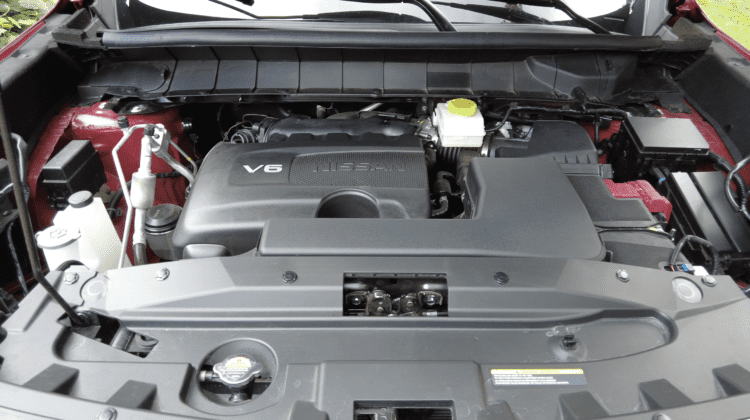 This is not the heaviest Pathfinder model, though it does make a close second place finish. At 4,605 pounds, it is only 20 pounds lighter than a fully-loaded 4WD Platinum trim. While it is missing a lot of accoutrements from that model, such as the panoramic moonroof, it makes up for that with the 18″ wheel/tire package and heavy-duty roof rack. Acceleration from 0-60 mph takes the same 6.6 seconds as the last Pathfinder model we tested. Unfortunately, my 40-mile test loop with a mix of city and highway driving only yielded 18 mpg. Highway-only driving came out to 21 mpg, but the mixed driving number is much lower than what you should be able to attain with other Pathfinder trims (especially 2WD models). You can likely blame this on the higher ride height, massive roof rack, and fat tires.

On the road, the Pathfinder has an above average driving experience for three-row family crossovers. It has excellent control over all planes of motion, keeping body roll and pitch/dive to a minimum. It’s no Mercedes-Benz GLS, but its weight is well managed for something this large. It is also a breeze to maneuver and easy to bring to a stop thanks to the above-average brakes. There is little to no dead space in the pedal travel, making it easy to modulate your rate of deceleration. Stopping from 60 mph takes about the same amount of distance as the regular models thanks to the wider 265 mm tires. The steering feel is also surprisingly well-weighted for a vehicle like this. It’s not Toyota Highlander-light and numb, but not so heavy that you have to put too much effort into it. Its actually one of the best feeling steering racks in the segment. One other thing to note about the Rock Creek is that cabin noise is a little louder compared to other Pathfinder models. You can clearly hear the rumble from the bigger tires, but not too much wind noise from the large roof rack, surprisingly. It sounds more like you’re driving a 4Runner or Bronco than a Grand Cherokee. This should not be considered a deal-breaker, though.

Nissan says the Rock Creek has an “off-road tuned suspension and four-wheel drive to help families get farther into nature to find more remote campsites or fishing holes down gravel roads and two-track trails.” I tested this claim by taking the car to Charlie’s Creek in North Georgia. This off-road sanctuary starts with a long creek-side gravel path with various camp sites and parking spots along the way. In the sand drive mode, the AWD torque distribution meter became more balanced to help give me the most traction I could get on that loose surface. Jabbing the accelerator sometimes pushed more power to the front axle, but under a low-speed cruise it maintained the balance. 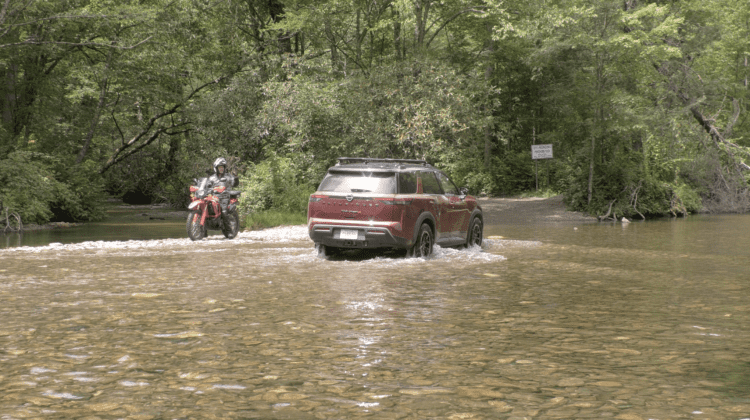 You then arrive at the water-crossing, which marks the beginning of the off-road trail. The creek is pretty substantial in width with smooth rocks covering the creek bed. They were sometimes as large as basketballs. A variety of vehicles were traversing this section, such as a Nissan Xterra, a Jeep Gladiator, and a BMX bike. I put the Pathfinder into the mud/rut drive mode and gave the gas pedal a rigid press and hold. The fat all-terrain tires ate the creek right up, never once slipping or getting stuck. The water didn’t come up super high, probably only up to the middle of the wheels at its highest, but I know for a fact I wouldn’t attempt to do this with lower-profile tires. 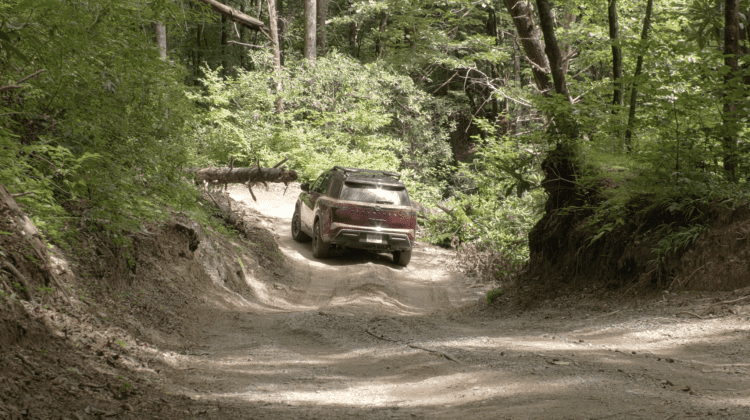 The trail that follows is narrow and somewhat technical at times. The Around-View Monitor really helped with checking on the right side and front of the car. I probably would have hit a log or two without those cameras, as there was a lot of debris down low you couldn’t see from the driver’s seat. While there were never any cantilevering elements, the trail would often go over steep grades with uneven surfaces, allowing the Intelligent 4WD to do its work. Boulders popped up here and there as well, though the Rock Creek never had any trouble traversing them. All things considered, this was a great trail to prove that Nissan did all of the right things to make this a proper light off-roader. Unlike the Xterra that is kind of spiritually succeeds, the Pathfinder is still a comfortable family-hauler at the end of the day. When you’re done with the trails, the drive home will be smooth and easy. The way the Pathfinder handles this mix of duties is, honestly, what makes it one of my new favorites in the segment.

Though the Rock Creek is not on sale as of this writing (and I was driving a pre-production unit), Nissan says it will be on sale late Summer and will slot in-between the SV and SL trims in the Pathfinder lineup. We do not know pricing yet, but that placement means it should end up between $39,360 and $42,440. The only true competitors to the Rock Creek are the Honda Pilot TrailSport, the upcoming Kia Telluride X-Pro, and lower trims of the Jeep Grand Cherokee. Of course, the entire three-row crossover segment is fair game, but if you want something from the factory with beefier tires and some sort of substantial off-road-focused upgrades, these are the only games in town. If Subaru ever adds an Ascent Wilderness Edition, I’ll add that to the list.

Verdict? I really enjoyed the Pathfinder Rock Creek. It goes a little further off the beaten path than the average off-road trim for family vehicles. It can actually cross rocky creeks and do some mild off-roading, then return to the pavement without breaking a sweat. The 9-speed automatic, like it did for the rest of the Pathfinder lineup, makes this a much more enjoyable driving experience than the previous generation. It may not get the best fuel economy for a Pathfinder, but it proves it can do a lot more than your average crossover. This is just another example of Nissan making palpable strides towards being a better car brand with competitive alternatives to the most popular options out there. Kudos to Nissan for making such a well-rounded vehicle. Now, let’s just add a sunroof option.