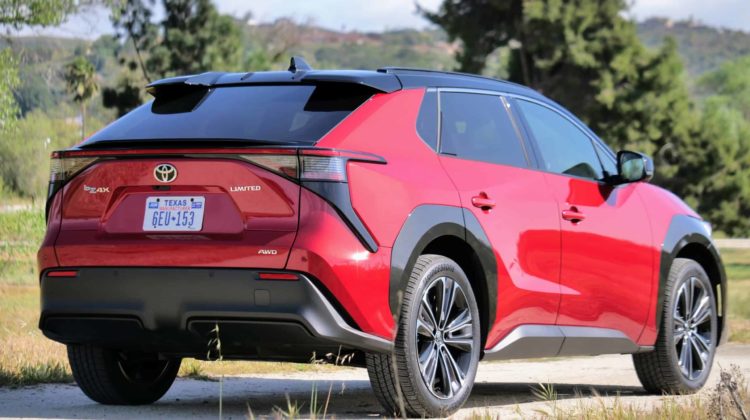 Toyota and Subaru’s partnership excursion began with the Scion FR-S and Subaru BRZ back in 2011. 11 years later, both of their successors are out and generating positive feedback and record sales. For their next collaboration, the Japanese brands decided to take a similar approach with two new EVs. The Subaru Solterra and Toyota bZ4X are essentially the same car with minor visual tweaks and variations on propulsion options. Being a Subaru, the Solterra is dual motor all-wheel-drive only, while the Toyota offers a single motor front-wheel-drive variant on top of that. The 4X is the first model to join Toyota’s bZ or ‘Beyond Zero’ family of electric cars. We recently had a chance to drive it for the first time, and here’s what sets it apart from the Subaru.

If you’ve already seen the Solterra, this should look extremely familiar. The shape of the nose and some details in the front and rear lighting are really all that separate the bZ4X’s exterior from that sun-kissed EV. The design is clearly influenced by the current RAV4, Toyota’s most popular vehicle. The shape and trim around the side windows is pulled straight from that crossover, but its rear end reminds me more of the first generation Mirai hydrogen fuel cell vehicle. Up front, Toyota says the nose and headlight design were inspired by a Hammerhead Shark, and we can definitely see that. Alex and I are torn on whether this or the Solterra looks better, though. I’m team Solterra for its more traditional front grille look. Alex prefers the clean face of this car.

Another area that splits opinions is the body cladding. On the 4X, the trim around the wheel arches is a glossy off-black color. The Solterra receives matte black trim all the way around. While I prefer the glossy look of the Toyota, I believe both benefit from the rugged look those treatments provide. Many others will argue that none is the correct answer, but we’ll leave that up to the eye of the beholder. Limited trim models ride on the 20″ wheels you see here, while the XLE trim rides on smaller 18s. The only other things differentiating the two trims are amount of light-emitting diodes in the headlight housing, the chrome trim around the windows, and the twin rear spoilers.

Inside, the interior is modern, futuristic and easy to use. Toyota’s new Audio Multimedia system is here with a 12.3″ screen standard on all models (base Solterras receive a smaller 8″ screen). In both cars we sampled, it didn’t miss a beat. Quick Apple and Android smartphone integration and decent “Hey Toyota” voice recognition made for a positive experience. In other markets, Toyota offers a yolk-style steering wheel. The North American market sticks with a traditional wheel that sits in a unique binnacle just below the small LCD instrument cluster display. Unlike other cars, Toyota designed this screen to perch above the top of the wheel in your line of sight as opposed to within the ring. It does not move with the steering column like on a Volkswagen ID.4. While not a problem for us, it could potentially prove to be difficult to see for the shortest of drivers.

The dual-pane moonroof is standard on all bZ4X models, optional on the Solterra. A feature borrowed straight from Subaru is ‘X-Mode’, which helps the 4X utilize its 8.1″ of ground clearance more effectively to get you over the rough stuff. We had a chance to take it for a brief soft-roading adventure, but that really didn’t demand a push of the button. Otherwise, the rest of the interior utilizes a mix of fabric and gloss black trim that fits the EV vibe well. One unique feature that Toyota is pretty excited about is the radiant leg warmer. On the passenger side it is situated where the glove box would be behind a fabric cover. It lives just under the steering wheel on the driver’s side and gives occupants the sensation of a furnace warming you up.

The bZ4X is offered in two configurations, single- and dual-motor. The single-motor model is powered by a 201 horsepower electric motor sitting above the front axle. Its battery is 71.4 kWh in size, which is actually only 1.4 kWh less than the dual-motor’s battery. The dual-motor model uses two 107 horsepower motors to produce a total of 214 horsepower. The biggest thing we were able to take away from driving both back to back was how similar they feel under your right foot. With very similar horsepower figures and only 60 pounds separating the two in terms of curb weight, the single-motor 4X felt nearly identical in performance. On paper, Toyota claims the AWD model runs 0-60 mph in 6.5 seconds and the FWD model in 7.1, just so you know.

In fact, after initial evaluation, we would not hesitate to claim the FWD single-motor model is the one to get. As long as you don’t need all-wheel-drive in your part of the country, the FWD model will charge faster at Level 3 DC Fast Charging stations (150 kW versus 100 kW), and will squeeze out 8-10 extra miles of range. FWD models can go up to 262 miles while the AWD ones can get you as far as 228. The onboard AC charging unit is borrowed from the RAV4 and Prius Prime, so 6.6 kW of charging power no matter which setup you choose.

On an EV driving dynamics spectrum, the bZ4X errs more on the side of ID.4 than Mustang Mach-E. The platform is solid and uses an independent front and rear suspension that doesn’t make the car so firm that it bounces down the road. It is clearly tuned for a more docile audience, but at the same time takes advantage of its low center of gravity by offering entertaining road manners you won’t find on any RAV4. It essentially feels like the RAV4 graduated to a new echelon of ride quality and handling. Check back for a full review on the bZ4X to see a deeper dive into how the car behaves.

Until then, know that Toyota is building less than 10,000 bZ4X models in the first year. It is also not the last bZ model we are going to get. The next family member will likely be a production version of the bZ SDN concept (spy shots have already come out). Since the 4 represents the size of the vehicle and X means it’s a crossover, we can deduce that a production bZ SDN would be called bZ4S or bZ5S. There are quite a few other variations to anticipate thanks to the buffet-style bZ reveal Toyota gave us last year. If nothing else, the existence of a mass-market Toyota EV could finally be the catalyst to ease the general public into the electric space. As such, the bZ4X should prove to be a great first impression when it goes on sale next month.

2023 Honda HR-V First Drive: I recently had the chance to spend some time … END_OF_DOCUMENT_TOKEN_TO_BE_REPLACED