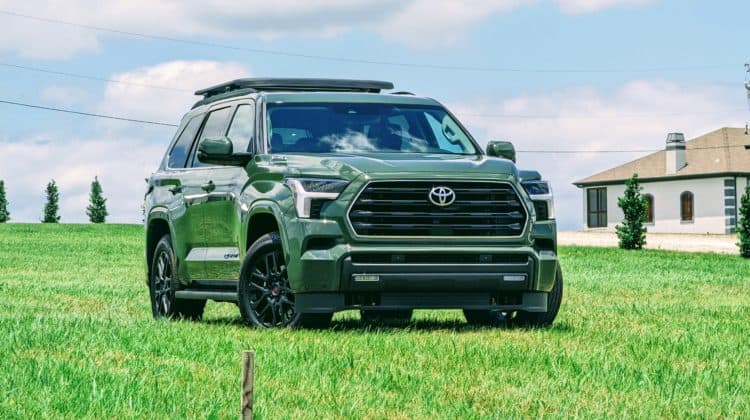 The 2023 Toyota Sequoia first drive event provided our best look yet at the first redesign of this nameplate since 2008. There’s a lot to like about the Sequoia, but as we discovered in its drive experience and with its interior, many compromises were made in order to make it a hybrid-only affair this time around.

The 2023 Sequoia’s exterior design is a major departure from the outgoing model’s. Taller, boxier, and much more attractive, the new one is the best looking option in the segment, at least to us. It is also much more closely related to the Tundra under the skin this time around, but Toyota didn’t go so far as to give it an identical front grille. Here the grille is connected at the bottom and forgoes the truck’s handlebar mustache look. This puts it much more in line with the Tacoma and RAV4’s designs. If for no other reason, the Sequoia’s road presence and sharp design elements might just be the deal-maker for shoppers. Then again, Toyota did say that their paramount goal with this generation was to impress current Sequoia owners and get conquest buyers along the way. Considering how long they had to wait for a redesign, I’d say the new look was worth it.

Other notable elements include the black A-pillars, bulging fenders, and rear tailgate glass that now swings open instead of sliding like a window. The front grille insert changes theme depending on the trim. SR5 and Limited trims have horizontal bars, Platinum has a dark honeycomb treatment, TRD Pro gets the TOYOTA branding in big black letters, and Capstone receives a shiny chrome honeycomb treatment.

Inside, the dashboard is nearly identical to the new Tundra’s. A large 14″ touchscreen is available on all trims, standard on the highest ones. It dominates the interior and houses Toyota’s new locally-engineered Audio Multimedia infotainment system. It replaces the old Entune interface with wireless Apple CarPlay, Android Auto, over-the-air updates, and an overall much improved interface. The problem with this system lies in its reliance on a tethered smartphone’s internet connection in order to operate the connected navigation. There is also a subscription at the basis of the system that is free for a period of time after purchase, but will later start taking your money in order to access this feature. Moral of the story, just use Apple CarPlay and Android Auto. They look great on the big screen. 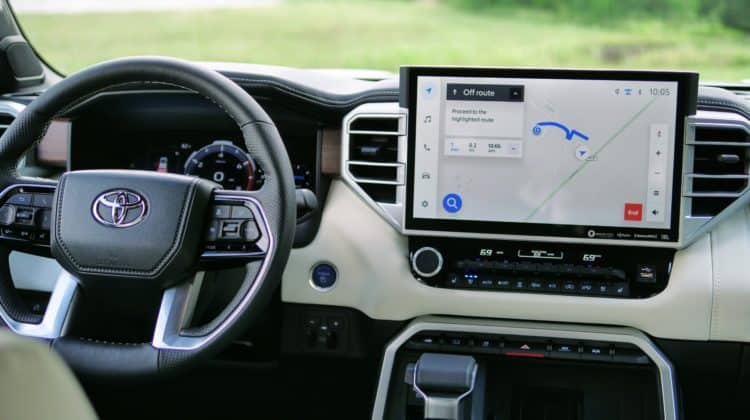 The Sequoia finally has an optional panoramic moonroof that covers the first two rows and gives the cabin an open and airy atmosphere. In order to accommodate the standard i-FORCE Max Hybrid’s battery, the second row is now fixed in one position and can be configured with two captains chairs or a three-person bench. Unlike the outgoing model, there is no large center console with storage and cupholders between the captains chairs. The battery sits beneath the third row and, unfortunately, takes up quite a bit of space back there. You definitely feel like you’re sitting on top of the car and not necessarily in it. To make up for this, Toyota decided to give this row the ability to slide fore and aft about six inches. It does so in a 60/40 split, and they claim this is an industry-first feature (large SUVs from the early 2000’s had sliding third rows, including the first Sequoia).

The space behind the third row is configurable with a cargo platform that has three different positions. When you open up the rear glass and have the platform in its highest position, it is easy to reach in and load up the space with things like groceries without having to open the entire tailgate. The middle position allows for two divided sections for cargo, while the lowest position makes a traditional cargo setup. The seats slide with a manual lever but have the ability to power recline at the push of a button. Even so, this space will not be mistaken for a minivan’s.

The most perplexing thing about all of these packaging tricks is how none of them make for a roomy back seat. In fact, combined second and third row leg room is less than that of the smaller Highlander’s. When it comes to head room in that third row, anyone taller than 5′ 9″ will not be able to sit straight up. Really, the only reason you’d pick the Sequoia over the Highlander if you want to more comfortably fit three passengers across either bench seats. It is definitely still wide like a full-size SUV should be.

The aforementioned interior…sacrifices…were made for the sake of the standard i-FORCE Max hybrid powertrain. So it better have been worth it, right? Well, for starters, the engine produces half the amount of carbon dioxide emissions as the old 5.7L V8. It is far more powerful, putting out 437 (+56) horsepower and 583 lb.-ft. of torque (+182). And it is certainly more fuel efficient, but not by much. During our brief highway stint, we managed to barely crest 20 mpg cruising at around 70 mph. The Sequoia accelerates with authority but isn’t necessarily quick compared to its competitors. Anyone who says the new engine can’t do what the old V8 could should really give it a shot, though. It sounds great and tows 9,500 pounds when properly equipped, which Toyota says was a key focus point for the new model’s engineering efforts.

When it comes to how the i-FORCE Max operates, in its default mode you will find that the engine will shut off during cruising, but give it even a tiny bit of throttle and the engine will kick back on. You’ll find a 10-speed automatic (no CVT, thankfully) sending power to the ground via either rear- or part-time 4WD. Making it only part-time was definitely a misstep as the driver will have to be conscious of what mode they are in (2H, 4H or 4L) at all times, unlike the competitors’ full-time systems. We didn’t spend too much time in the TRD Pro model, but it was certainly capable of doing some serious mudding and hill climbing. 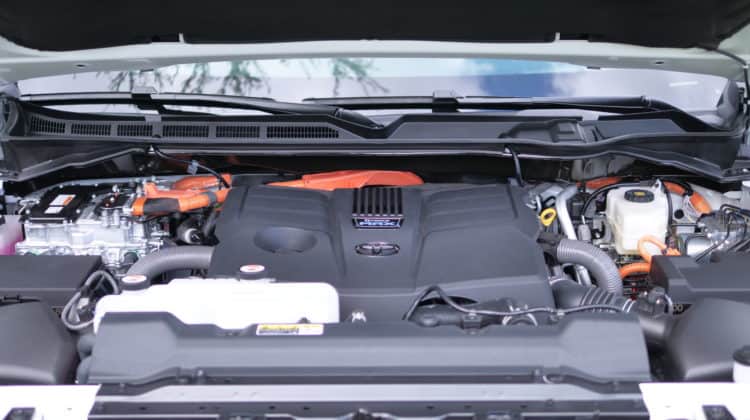 The first characteristic of this powertrain to note is the lack of refinement in the way the system handles braking. Because of the setup of the electric motor and the way everything is tuned, it always feels like you’re towing a trailer with the way the car’s weight shifts between each downshift of the transmission. The brakes themselves performed adequately for the size of the Sequoia, but that lurching from the deceleration experience did not feel fitting of the price of the Capstone. This is something we also noted when driving the new Tundra. With the new multi-link solid rear axle, a downgrade from the previous independent setup, the rear end never really settles down when driving over the bumpy stuff. This is most apparent if you are a passenger in the awkwardly-high third row seat.

The ride quality may be less impressive than its competitors’, but the Capstone trim is decently hushed thanks to front acoustic laminated glass. Handling is what you expect from a tall, heavy box on wheels. Push it too hard into a corner and it will begin to lose grip, with a noticeable amount of body roll on the side. Tire choice has a lot to do with this, as does the extra weight from this being a hybrid. Overall, this won’t be the most dynamic option in the segment, but that’s not exactly saying too much. The Sequoia is still a comfortable choice for the first two rows.

We waited a very long time for a new Sequoia. I (Brian) was in elementary school when the current one came out, to put it in perspective. While Toyota claims it wants to triple Sequoia sales with this new model, we came way only half convinced that they did enough after 14 years to make it competitive. Yes, it is unique in the segment for being a hybrid only, and yes it is a very handsome SUV. The interior is finally with the times and looks great. But, you’ll find more efficient and less pricey options out there with better ride quality and more spacious third rows. That’s why you buy full-size SUVs over minivans (and the towing, of course), so the fact that this one’s third row is smaller than a Highlander’s is troubling. Will it impress current Sequoia owners? Absolutely. Whether or not it impresses GM and Ford’s crowd, or even those looking at the aging Nissan Armada, will remain to be seen…