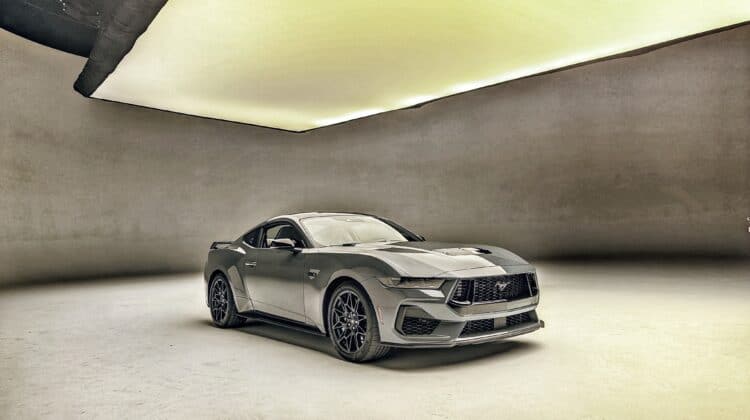 2024 Ford Mustang and Dark Horse Debut: The seventh-generation 2024 Ford Mustang has come out of hiding in Detroit, and it brings along with it evolutionary styling, a new design direction and technology on the inside, and a V8 with a manual transmission. No hybrid, no all-wheel drive. This is still the Mustang as it always has been, and it won’t be mistaken for anything else. There’s also a new Dark Horse variant, which will effectively replace the Mach 1. It has over 500 horsepower and a Tremec 6-speed manual transmission, as opposed to thee standard Getrag unit. The other GT Mustangs with the Coyote V8 will have around 480 horsepower, but we don’t know exact power output for the base 2.3L EcoBoost 4-cylinder just yet.

We got some in-studio time with the Mustang GT, which revealed the Mustang’s more chiseled lines and dominating stance. It is a very good looking car. The Convertible is also returning for 2024, but we didn’t have any time with it, unfortunately. The interior of all Mustangs goes in a different direction that ever before. Following the trend of dual connected screens on top of the dash, the look doesn’t scream Mustang, but id certainly screams modern. Most materials feel like a step up from the outgoing car. Check out our first look below!

We unfortunately missed the debut of the Dark Horse model, but I’ve got some photos of that model for you alongside our in-studio photos of the GT. More on the 2024 Ford Mustang Dark Horse here.