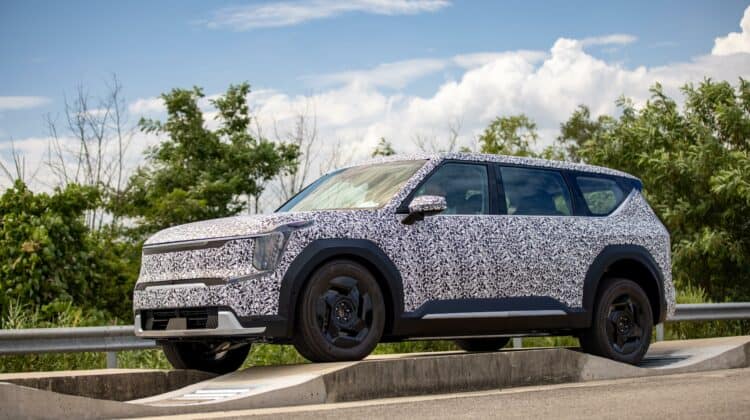 2024 Kia EV9 Officially Teased: Today, Kia released four official photos of the upcoming EV9 three-row electric crossover. The second addition to the ‘EV#’ family of electric cars from the Korean manufacturer, it was first previewed late last year by a concept bearing the same name. As you can see, the car is still fully camouflaged, but only the body skin is masked. It appears that Kia kept the production design as close as possible to that concept, as this looks uncannily similar. A boxy shape with a somewhat unique rear window kink and an extremely long wheelbase are very apparent. Some angles have a large Soul vibe, even.

Accompanying the photos was a statement by Kia about the EV9’s impending arrival. It is still undergoing “rigorous” testing but will be fully revealed early next year. It has taken a 44-month program to get the EV9 up and running, including serious off-road capability measurements like deep-water fording and serious climbing challenges. The EV9 is shaping up to become the bargain Rivian R1S, as the existing models in Hyundai Motor Group’s e-GMP portfolio have knocked it out of the park. The interior should be massive and range is expected to be around 340 miles.