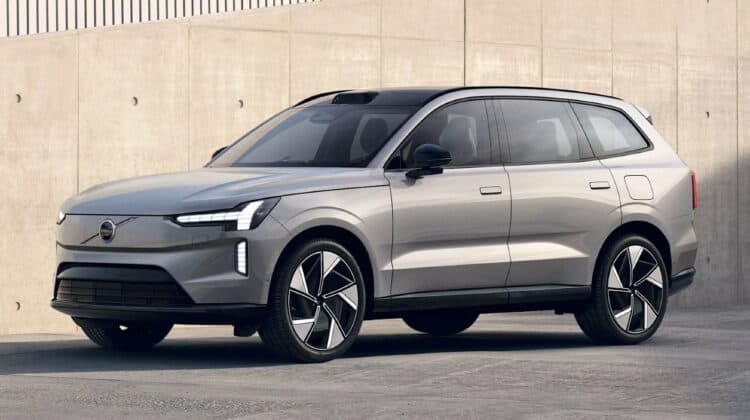 Volvo has finally revealed the electric XC90 successor, the EX90. Volvos are known for having conservative designs, so the final product here is immediately recognizable as one of the Swedes. Volvo simply took a few details from the Recharge concept and grafted them onto the XC90 body. The XC90 has aged like fine wine since its debut in 2015, so that’s good. The new front end and rear taillights are the most noticeable differences from across a parking lot. As you get closer, details like the smoother surface lines, flush door handles and roof-mounted lidar sensor become more apparent. It is certainly a handsome thing, something that can’t be said for some of its competitors.

What can you expect for power and performance? The EX90 will get its juice from a 111-kWh battery on a 400V charging architecture. Charging from 10-80% will take just 30 minutes at DC fast chargers. A dual-motor all-wheel drive configuration produces 496 horsepower and 671 lb.-ft. of torque. Bi-directional charging will be enabled for powering external devices machines via the EX90’s battery. Will it clear any of the IRA hurdles for attaining tax credits? While it will initially be built in the company’s South Carolina plant, the battery will be produced by CATL. This means it will only partly qualify when it goes on sale in 2024. You can pre-order it now, but you won’t be able to configure your order until fall of 2023.

The EX90 is going to cost a lot less than other three-row EVs like the EQS SUV and Model X, but Kia’s upcoming EV9 will certainly undercut it. Volvo says it will come nicely-equipped under $80,000. More on the 2024 Volvo EX90 here.