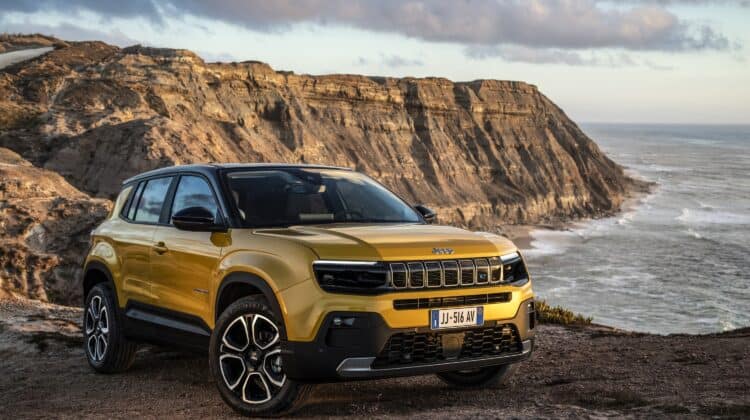 First Ever 4xe Day Reveals Upcoming Jeep Electric Cars: At Stellantis’ September 7th ‘4xe Day’ for the Jeep brand, they proudly revealed the electrified vehicles they have been preparing for our market as well as for Europe. They also spoke to the goals they have for both markets, respectively. By 2030, every car sold in Europe will be a full electric car, while in the U.S. at least half of the lineup will be fully-electric by that time.The first vehicle to kick off Europe’s transition is the all-new 2024 Jeep Avenger.

Smaller than our Renegade and even cuter, the Avenger was originally rumored to be reviving the ‘Jeepster’ name. Borrowing from a previous lackluster Dodge product instead seems like a strange move if you remember that car well, but if you don’t (it’s for the best), then this a cool little package. Avenger will have up to 400 km (around 250 miles) of range and will go on sale early next year in the Old Continent. It will debut in the flesh at the Paris Motor Show press day on October 17th, with reservations opening for customers that same day. We don’t know much more than that.

Jeep says that by the end of 2025, there will be four all-electric models in the U.S. lineup, with the entire lineup offering some sort of 4xe electrification. Before we get to the full electric stuff, let’s talk about the electrified Grand Wagoneer. We weren’t provided much information on the upcoming 4xe variant, nor do we know for sure if it is a plug-in like the other two current 4xe models (the company wouldn’t confirm or deny). All we were told is that “in the large SUV segments the Wagoneer models will deliver powertrains that target an estimated 500 miles of combined range.” Combined range certainly alludes to a plug-in hybrid like the Grand Cherokee and Wrangler 4xe, but stay tuned for more concrete info on that.

Next up is the fully-electric Wagoneer, currently known as ‘Wagoneer S’. The S stands for speed, striking, and sexy. This is a mid-size SUV with similar interior dimensions to the current ICE Grand Cherokee, but with a slightly smaller exterior footprint thanks to the electric ‘STLA’ platform it rides on. Jeep says this model is still deep under development but will be a premium vehicle with premium specs. 0-60 mph in 3.5 sec, 600 hp, and up to 400 miles of all-electric range. It will be revealed in its final form next year, with production beginning in 2024 here in North America. Customers in the U.S. will be able to make a reservation as soon as early 2023. It will also be sold in Europe and other major markets around the world.

The second of four electric models will be the Wrangler-inspired Jeep Recon. No, Jeep has no intentions of replacing the Wrangler with this model, as that is the icon of the brand and has a cemented place in the lineup for the foreseeable future. Like the Wrangler, however, the Recon has exposed door hinges and a freedom roof option for the ultimate open-air electric experience. It earns the coveted ‘Trail-Rated’ badge and will offer Jeep Selec-Terrain traction management system, e-locker axle technology, under-body protection, tow hooks and aggressive off-road tires. Like the Wagoneer S, it will be built here in North America and will go on sale in 2024 or so. Consumers will be able to make a reservation for the Recon starting early next year, and it will be sold globally.

What follows these models is still unknown, but Jeep told us to stay tuned for more information on the next electric Jeep very soon. “Today we shared only a glimpse of our new portfolio of all-electric SUVs, providing tangible evidence of what is to come in the next 24 months and why we say that 4xe is the new 4×4,” said Meunier. “This powerful combination of Jeep design, legendary 4×4 capability and electrification will reshape the SUV market, allowing more customers in more countries and in more segments to join us on our path toward Zero Emission Freedom.”