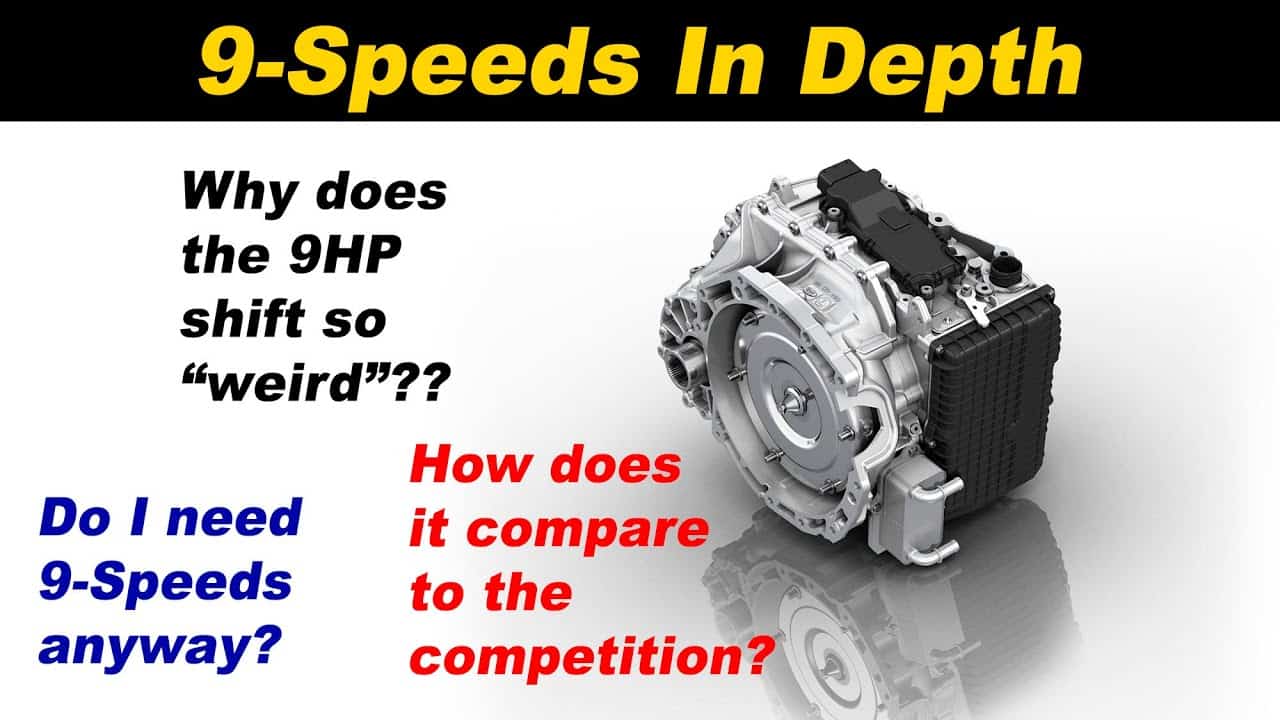 In general terms an engine is most efficient in a somewhat narrow band of RPMs. That exact band varies from engine to engine based on what the designers intended at the time. The longer you can keep the engine in this range of RPMs, the more efficient the car will be. Secondary to this is a desire for improved off-the-line performance, this necessitates ever-lower first gear ratios. The distance between the lowest and the tallest gear in a transmission is called the ratio spread. (You get it by dividing the lowest ratio by the tallest and that gives you a number that represents the delta between first and last.) GM’s venerable 4-speed 4L80 has a spread of 3.3 while their new 6-speed 6L80 has a spread of 6. The deeper first gear and taller 6th allow the 6L80 to deliver better performance and better fuel economy. The reason ZF’s 8-speed 8HP doesn’t have the same delta in performance over the average 6-speed as the 6-speed had over the 4-speed, is easy to explain. The 8HP’s ratio spread is 7, just 1 higher than a 6 speed while the 6-speeds had a 3 point advantage over the 4-speeds. Aisin’s new 8-speed transaxle in Volvo and Lexus models goes a small step further with a 7.59 spread. These can all be seen as progressive improvements. The 9HP is different. With a 4.7:1 first gear and a 0.48:1 ninth gear the overall spread is a whopping 9.8.

On closer inspection you’ll notice something interesting about the 9HP’s ratios. Fifth is the 1:1 ratio where the output shaft of the transmission is spinning at the same rate as the engine meaning therefour overdrive ratios. In contrast both ZF and Aisin’s 8-speed transmissions have just two overdrive ratios with 6th gear being the direct-drive (1:1) ratio. As a result the 9HP’s lower gears are farther apart, especially first and second gear. When you look deeper at the numbers you’ll also notice that the 9HP is geared much taller at the top end with 7th gear being approximately equal to 8th in the Aisin or ZF 8-speed units. Many reviewers of the Cherokee noted they never experienced 9th gear during their test drive and I now know why. At 0.48:1 with the 3.2L V6 (3.251 final drive) you have to be going faster than 80 MPH to engage 9th because at 80 your engine loafs around at 1,460 RPM. (The 2.4L four-cylinder in the Cherokee Trailhawk would be going about 1,810 RPM at 80.) According to ZF this results in an impressive 12-16% improvement in fuel economy versus the same final drive ratio and their own 6-speed automatic and 11-15% when compared to their 8-speed.

OK, so the 9HP has plenty of gears, but why does it shift the way that it does? It’s all down to the clutches. While a traditional automatic uses friction clutches in the form of either band clutches or multi-plate friction clutches, the 9HP blends friction clutches and dog clutches in the same transmission case. Dog clutches are “interference” clutches more commonly found in manual transmissions and transfer cases. Friction clutches work by pressing two plates together. The friction between them allows the transfer of energy and it allows one plate to spin faster than the other or “slip.” Think of slipping the clutch in a manual car, it is the same action. Automatic transmissions use this clutch type to their advantage because changing gear doesn’t always require engine power to drop, the transmission simply disconnects one clutch as it engages another, they slip and engage and you’re in another gear. Dog clutches however are different. If you look at the illustration below you can see a dog clutch on the right. Power is transmitted by the tooth of one side pressing on the tooth of the other. This type of clutch cannot slip so it is either engaged or disengaged. This is the type of clutch used inside manual transmissions. When you move the shifter to a different gear, you are physically disengaging and engaging dog clutches. This style of clutch is used because it suffers little parasitic loss and it is simple and compact. The use of a dog clutch in an “automatic” transmission isn’t new, dual clutch robotized manuals use this style of clutch internally as well, but it is the key to understanding why the 9HP shifts the way it does.

Because dog clutches can’t slip, their engagement must be controlled and precise. Going back to the manual transmission example, this is why modern manual transmissions have “synchros” or synchromesh. A Synchro is a mechanism that aligns the dog teeth prior to engagement. Without them you get that distinct gear grinding noise. Synchros work well in a manual transmission because when you are changing gear you are disconnecting the engine with the clutch (a friction clutch), then engaging a dog clutch for your gear selection. Because one end of the transmission is “free” the synchro synchronizes the two sides and then allows the toothed gear to engage. There is a “pause” in power when a shift occurs. If you look at an acceleration chart of a car with a good manual driver and an automatic you will see pauses in acceleration in the manual while most autos just have “reductions” in acceleration. That’s down to the pause required to engage a dog clutch vs a friction clutch that slips and engages without much reduction in power.

Let’s digress for a moment and talk about the DSG. The reason dual clutch gearboxes exist isbecause of the dog clutch. As I said engaging a dog clutch takes time and precision. This is part of the reason single-clutch robotic manuals like the one in the Smart ForTwo and the RAM ProMaster (and other Euro sedans) have such exaggerated shifts. Double clutch gearboxes get around this by having two gears engaged at all times. DSG style gearboxes are really two manual transmissions in the same case. 1st gear is engaged via the first transmission and 2nd is engaged but not active on the second. Changing gears simply involves swapping (via a friction clutch) from transmission A to transmission B. Once that is accomplished, the transmission A disengages and engages the dog clutches to select the next gear. Going from 2nd to 3rd involves swapping back from transmission B to the already shifted transmission A.

Let’s put it all together now. To save space and increase efficiency, the 9HP uses two multi-plate clutch elements, two friction brakes and two electronically synchronized dog clutches. (The 8HP uses two brakes and three multi-plate clutches.) The way the gearsets are arranged inside the case, shifts from 1-2, 2-3, and 3-4 involve only the traditional friction brake and clutch elements. As you would expect, aside from 1st being fairly low and somewhat distant from 2nd, these shifts feel perfectly “normal.” Under hard acceleration there is a momentary reduction in engine torque (courtesy of the computer to reduce clutch wear) and the shift occurs quickly and smoothly. The shift from 4-5 however is different. The transmission has to disengage dog clutch “A” in addition to engaging a friction clutch. This shift takes slightly longer than the 3-4 shift and the car’s computer makes a drastic reduction in torque to prevent wear of the dog teeth. Shifts 5-6 and 6-7 again happen with the only the friction elements at which point we need to disconnect the final dog clutch for gears 8 and 9 so we get the same kind of torque reduction in those shifts. The result is a transmission that has two distinct “feels” to its shifts, one that has only a slight torque reduction (1-2, 2-3, 3-4, 5-6, 6-7, 8-9) and one that has a more “manual transmission” feel where torque is cut severely (4-5 and 7-8).

Because of the positioning of the two dog clutches in the shift pattern, the torque reduction isn’t objectionable in upshifts. Hard acceleration from a stop didn’t involve 5th gear even in the 1/4 mile. However, once you let off the gas the transmission will shift upwards rapidly for fuel economy settling in 6th or 7th in the 60-65 MPH range and 8th in the 70-75 MPH range.

Downshifts are where the 9HP truly feels different. Because of the design, if you’re in 8th gear and want to pass, the transmission will often need to drop 4 or 5 gears to get to a suitable ratio. (Remember that 4th gear is the first ratio going back down the scale that is lower than 1:1.) To do this the transmission has to accomplish the harder task of engaging two dog clutches. To do this the transmission doesn’t use cone synchros like a manual (too bulky) it uses software. Engaging dog clutches requires a longer and yet more severe reduction in torque than the disengagement because the transmission has to align the clutch and then engage it. In most automatics when you floor the car you get an instant feeling of acceleration that improves as the transmission downshifts. Although there would be moments of power reduction (depending on the programming) during this time, the engine is always providing some force forward. The 9HP’s software on the other hand responds by cutting power initially, then diving as far down the gear-ladder as it can, engaging the dog clutches and then reinstating your throttle command. The result is a somewhat odd delay between the pedal on the floor and the car taking off like a bat out of hell. According to Volvo’s powertrain guys, this shift behavior is one of the main reasons they chose the Aisin 8-speed (shared with the Lexus RX F-Sport) over the ZF 9-speed used by Land Rover and Chrysler.

All of a sudden the “odd” shift feel made perfect sense. In the march toward ever-improving fuel economy the automotive public will continually be introduced to cars that feel different from the “good old days.” Electric power steering numbs the wheel-feel but steer-by-wire promises to artificiality resurrect it. Dual clutch robotized manuals have a particular feel that was accepted by performance enthusiasts but has been a source of complaint for Focus and Fiesta shoppers. For me, understanding why the transmission is doing what it is doing is key to my like or dislike of a car’s road manners. Once I understood what the Cherokee’s automatic was up to, I was able to focus on the rest of the car. What about you? Are you willing to “sacrifice” shift quality at the altar of fuel economy? Be sure to let me know.