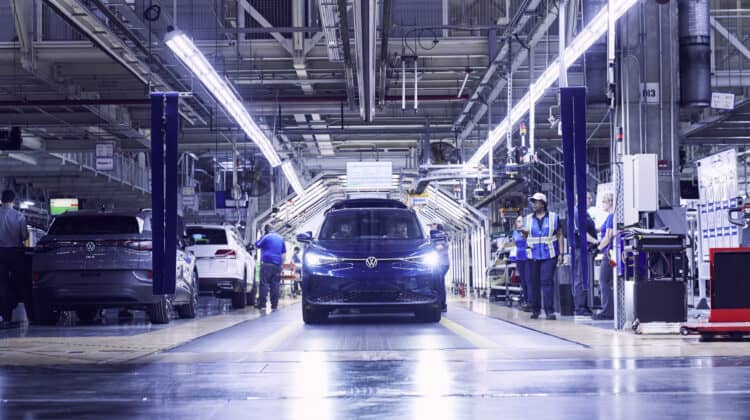 Volkswagen ID.4 Production in Tennessee: The ID.4 is the first model in VW’s all-electric ‘ID’ lineup that has made it to the United States. We know the next model will be the long-awaited ID. Buzz minivan inspired by the cool VW van from the 70’s. Today, however, we are still focusing on the former, as it finally begins production at the Chattanooga, Tennessee plant. This is the same facility where the Volkswagen Passat family sedan was built before its discontinuation earlier this year. “We’re just starting to write a new chapter for Volkswagen in America, and it is very much an American story,” said Thomas Schäfer, Chairman of the global Volkswagen brand. “When we promised to bring Volkswagen EVs to the millions, it always included American workers building those EVs right there in Chattanooga. We couldn’t be prouder to see that vision realized today with our ID.4 electric flagship rolling off the lines. This is another milestone in Volkswagen’s ambitious electrification strategy for the U.S. market and globally.”

The ID.4 will be built alongside the Atlas and Atlas Cross Sport. The Chattanooga plant opened in 2011 for production of the A32 North American/Chinese Passat sedan. There is no news on whether the U.S.-spec ID. Buzz will be built there eventually, but we’ll just have to wait and see. Chattanooga is now the sixth global site that builds vehicles in Volkswagen’s electric line-up.