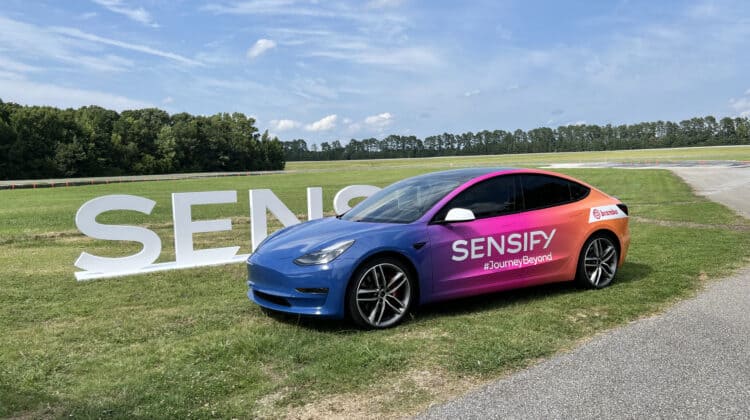 Brembo Sensify: Brembo, the widely recognized leader in performance brakes, plans to change the very nature of brake application in your next car starting in 2024. The Italian firm is calling their braking system “Sensify,” and it’s more than just a set of Brembo calipers and some brake pedal tuning, Brembo aims to replace the entire system from pedal to wheel.

I’ll let others debate the purity of pedal feel, instead let’s focus on how the system works and why I find it one of the most interesting changes to braking technology since the disc brake itself. The first thing to know is that despite Brembo trying to constantly re-focus the discussion, Sensify is a brake-by-wire system. I understand up till now, brake by wire has gotten a bad rap, and time will tell whether Sensify can change that, but the “by wire” part of this equation is why Sensify is so interesting.

ABS as we know it today started in 1971 with the Imperial having the first 4-sensor, computer controlled anti-lock-braking system. Using individual wheel speed sensors, a computer controlled valve block, and hydraulic pump, the system was inserted between the pedal and brakes. When braking, if one whee’s speed significantly drops vs the others, the computer activates valves in the valve block associated with the braking channel that’s locking. (In modern cars this refers to a single wheel but in early ABS systems it could also have been an entire axle.) The valve releases pressure until the wheel speed returns to approximately the same as the other wheels being sensed. At this point the hydraulic pump is used to return pressure to the channel. The pump is essential because without it, the brake pedal would drop to the floor given enough ABS interventions, and you’d run out of fluid in the master cylinder.

Although ABS has been around for 50 years, some drivers are still uncomfortable with the system when in operation. Some ABS systems are smoother than others, but all will give the operator some pedal judder as the valves and pump release and re-apply pressure to each ABS channel. Also, due to the general design of the systems, each ABS intervention involves the wheel being brought close to a locked state, then released because accurate hydraulic pressure control per channel is not possible.

When the driver presses the pedal in a Sensify equipped vehicle, sensors tells the Sensify controller how fast and how hard the pedal has been pressed. Brembo’s controller employs some level of AI to calculate the required brake application then passes that onto the brake actuator. The actuators come in two flavors: electro-mechanical (dry) and electro-hydraulic (wet).

Let’s digress to talk about the two caliper types. The wet system (as Brembo calls it) promises traditional Brembo braking characteristics with a floating caliper and as many pistons as you’d like. The caliper is actuated by an electrically controlled hydraulic pump with its own small fluid reservoir. (There are other variations, but for simplicity I’ll focus on this arrangement.) The short distance from pump to wheel reduces the fluid volume, while the individual pump allows for finer control over braking pressure.

The dry setup can currently only be employed with a fixed caliper design (most commonly used on less expensive vehicles up front or on the rear of many medium to high performance vehicles) . As the name implies, there’s an electric motor that drives the caliper’s motion. The benefit to this system is the elimination of hydraulic lines, fluid, and the ability for the system to precisely position the pad in relation to the rotor. Drag is of huge concern to EV makers, so the ability to pull the pad away from the rotor with greater control is huge. (There has been some debate that electric cars would lead to the return of drum brakes because the pads more completely retract from the surface of the drum.)

Back to the operation of system.

The controller then sends a braking command to either a new wet or dry brake caliper system. Thanks to greater ability to sense wheel speeds, the artificial intelligence, and precise control over braking pressure, ABS actuation becomes almost imperceptible. The system no longer has to repeatedly bring the wheel with less grip close to. complete stop and then release it, instead it can modulate the pad pressure against the caliper to keep the wheel right on the edge for improved braking confidence. Because the system is no longer physically linked to the brake pedals, judder is completely eliminated.

By relocating brake tuning to the Sensify controller, a car company has the flexibility to support hydraulic brakes all the way around, a blend of hydraulic up front, electric in the rear or full electric for less expensive vehicles if they do desire.

How it comes together

Why is there’s a picture of a Tesla Model 3 at the start of this article? Because that’s the test bed that Brembo chose to demo their new braking system. Our day behind the wheel started off with 100% stock vehicles. Brembo rented out the Michelin tire test track in South Carolina for this demo as it provided a variety of different surfaces well suited to ABS demonstrations, and despite the other benefits of Sensify, ABS function was what the engineers really wanted us to experience.

The ability of Sensify to more accurately control individual wheel speed was immediately noticeable in panic stop and evasive maneuver situations. It’s unclear at the moment whether stopping distances are ultimately shorter than with a traditional ABS system, but without a doubt the feel is completely different. There is zero pedal vibration, no rattling or springing noises under the hood. In a theoretical sense, vehicle control is superior, but more important to the humans that operate vehicles is the feel which allows even inexperienced drives to stay in control.

Vehicle stability also appeared to be better controlled in straight line stops, especially on wet surfaces. Likely because the wheels aren’t getting as close to a full lock as in a traditional ABS system, there is less of a lateral pulling feel that you can sometimes get in a regular car.

Ready for the downsides?

Cost is logically the main concern for this type of system. Right now we have no idea if it’s more expensive or not than a comparable “traditional” system, but I’d venture to say there would be some differential.

Unsprung weight vs a standard fixed caliper is likely higher for the dry (electro-mechanical) caliper, although exact weight penalties are unclear at this time. The wet setup? No penalty since the caliper design is essentially the same as existing hydraulic Brembos.

Pedal feel is decidedly “digital.” Regardless of the situation, the pedal response is the same. No shake, no shimmy, nothing. Mild braking, hard braking, evasive maneuver, everything is the same. I would not be surprised if some kind of pedal feedback device was integrated at some later date.

Where we do we go from here?

Come 2024 we should see the first Sensify system in a production vehicle. Which one? We don’t know yet, but I wouldn’t be surprised if it was a high performance EV. The system of course provided benefits for all vehicle types but EVs would make the most our of the electric fixed caliper design and the resulting efficiency improvement.

So what do you think? Is the world ready for brake by wire in a high volume EV? More on this technology here.