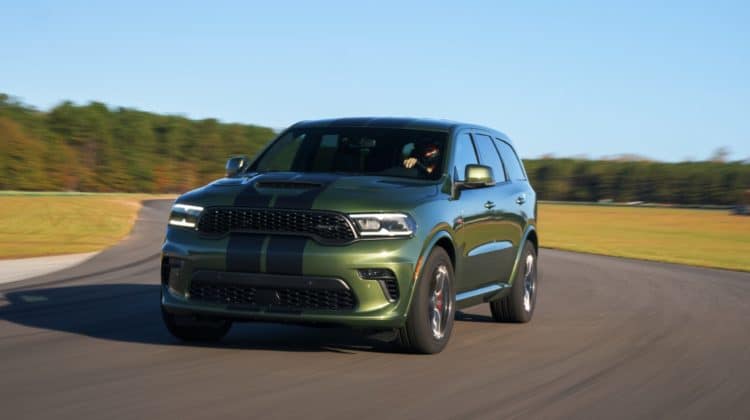 It’s that time of the year and Alex has been tasked with the hard decision of figuring out the replacement for his current Dodge Durango. In this buyer’s guide video, we see how Alex makes his decision and whether he ends up with a truck or…another Durango. Buying a new vehicle is a hard process because just one segment alone will give you a whole plethora of options.

This buyer’s guide episode focuses on Alex’s requirements for his next vehicle. Unlike your average consumer, the cars must be capable of fulfilling specific tasks, especially for someone living out in the woods as Alex does. One of the big reasons why he’s cross-shopping a truck and an SUV is that he needs to tow over 7,000 pounds or up to 9,000 pounds.

In the Dodge Durango, Alex is looking at the SRT 392 trim, which meets his towing needs. Thanks to its 6.4-liter V8, the Durango SRT 392 has prodigious power and torque. At 475 hp and 470 lb-ft of torque, there’s a lot of grunt on tap, giving the SUV effortless acceleration and a towing capacity of up to 8,700 pounds. Additionally, the Durango is sportier, especially if you get one of the SRT versions. That, however, will come at cost of payload and towing because powertrain and drivetrain configurations affect that.

Outside of the Ram TRX, which has over 700 hp, there’s no middle ground between civilized and crazy. You can’t get the naturally-aspirated 6.4-liter V8 in the Ram 1500, meaning Alex will have to make do with the same 5.7-liter V8 in his current Durango. The Ram 1500 is also more softly sprung than the Durango. You can also get the Ram with adaptive air suspension, which is a must-have option. You’ll also need to make sure that you take a close look at the model you’re interested in so that you get the right combination of payload, towing, powertrain, and drivetrain. Take your location into consideration, too, because a truck, especially one with a long bed, can be a handful to maneuver in tight city streets or narrow dirt roads.

Although competing trucks from Ford, G.MC, and Chevrolet have the capability Alex is looking for, the Ram 1500 has a nicer interior. You get a proper luxury truck interior in the Ram thanks to generous swaths of real wood and leather everywhere you look. The Ram 1500 is also one of the attractive trucks on the market, which is a plus.

In short, buying a car is all about balancing needs and wants. You can pick the right vehicle for your requirements; however, it’s important to make sure that you’re fine with the drawbacks since you’ll be living with it for at least a year or two. Additionally, the right vehicle for one person may not be the ideal choice for another.

So what did Alex end up ordering? After a long debate and two weeks with both a Durango and a Ram 1500, he eventually got a Durango SRT 392. Why? Dimensions and maneuverability. Additionally, the Durango was more capable and it’s able to meet all of Alex’s towing needs.