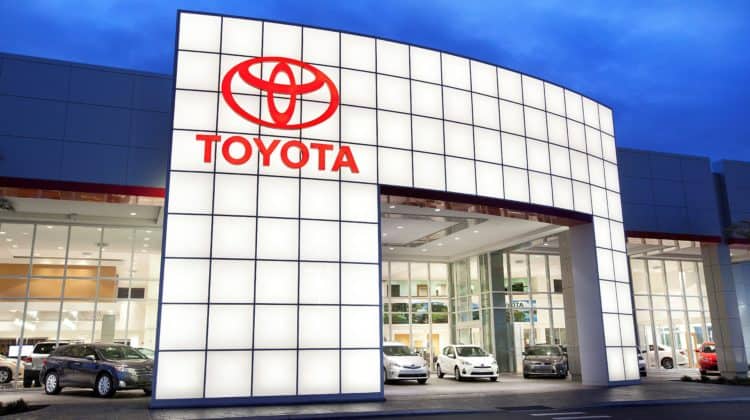 Let’s be honest, the process of buying expensive things is strange. Stranger still, regardless of the dollar amount, “expensive things” don’t always use the same sales process. When you want to buy a house you usually have typically two real estate agents involved plus brokers, lenders, title companies, county recorders, etc. involved. Even though you might be buying a car that’s more expensive than a condo in West Virginia, you don’t use the same process. Instead, you [usually] head to your local branded car dealer, haggle (or not), apply for financing on the spot, sign your name a million times on funky sales forms, and eventually drive away in your new 2022 Whatever. Buying something like an ATV, Side By Side, or Trailer seems superficially similar but there is way less paperwork despite some off-road toys having price tags that would make Audi jealous.

Note: An earlier version of this thought process on Facebook.com/alexonautos resulted in some folks seeing this as a personal attack on dealers. That is not my intent, instead, this is based on my own questions about why we buy various “things” in different ways and how that purchase process affects our impressions of the product and the brand.

Stranger than the variance in sales process is the fact that when you go to a new car dealer, the only products you’ll find new on the lot are from that brand. Want to cross-shop a Chevy and a Ford pickup? You have to visit two dealers that may or may not be close by. This process is different in the RV and Powersports world where an RV dealer may rep a dozen different RVs, 5th wheels, and trailers and cross-shopping is in theory as simple as parking your two options side by side on the same lot. Why is this? It’s all about the franchise agreement. 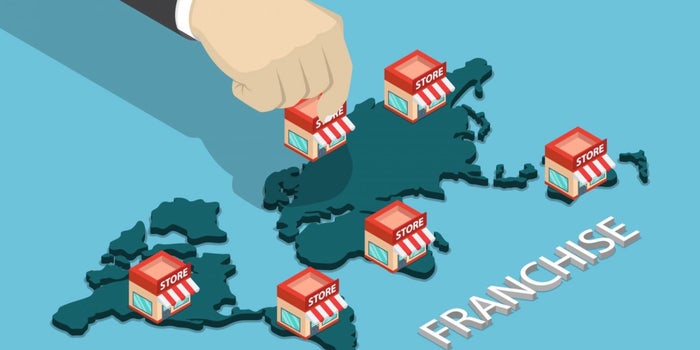 If you didn’t already know it, car dealers are franchises, not merely resellers. This is very different from your computer store down the block which is most likely just a reseller (authorized or otherwise) that buys stock from a distributor, puts things on shelves, and sells it to you. Think of your friendly local Dodge dealer like a Mcdonald’s. Just like McDonald’s parent company doesn’t allow your local Micky D’s to sell Wendy’s french fries next to their Big Mac, even though Wendy’s fries are better, a Mitsubishi dealer isn’t allowed to stock new Nissan Versas right next to the Mitsubishi Mirage, even though the Versa is better. (Sorry Mitsubishi.)

In the United States not only are most new cars sold via franchise dealers, but most states also require that new cars are sold in this way and, at least in theory, preclude direct sales from car companies like Tesla. Tesla has crafted an intricate set of business methods to get around the restrictions, but they are real enough that other budding EV makers (like Polestar) appear to be taking a hybrid approach with highly modified franchise agreements while others (like Rivian) are emulating Tesla’s direct sales model.

How did this start?

Back in 1897, the first car dealership in the USA opened, it was, interestingly enough, an EV dealership called Waverly Electric Cars. The best way to think of early “dealerships” was simply as a car reseller. They stocked, re-sold, and often serviced a variety of vehicles from a variety of companies. In the early days of car sales, every conceivable sales model was attempted including direct sales, mail order catalogs, consignment, door-to-door sales, general store retail, and more. The franchise dealer concept was also tried with varying success in the early years with the first franchise-style arrangement dating back to 1898 for a franchise dealer of steam-powered cars in Detroit. During this time it was fairly common to head down to your local “car store” as I prefer to call them and find several competing models on the sale lot to choose from and the name of the “car store” often had little to do with the brands that were sold. A good example is Normandin Chrysler in San Jose, CA which started as a horse-drawn buggy maker in 1875, converted to a horseless carriage seller selling a variety of brands in 1906 and purchased their first “franchise” from Franklin in 1915.

By the 1950s the auto industry had consolidated considerably, and in the United States was dominated by the “Big Three” General Motors, Ford, and Chrysler with GM taking the lion’s share of the market at around 50% of all new cars sold. Along with manufacturer consolidation came dealership consolidation and charges to the dealership franchise agreements. Between 1923 and 1983 the number of new car dealerships fell by 50%. New dealers were now the local extension of the brand, you might have a Family name like Normandin on the building, but now it’s not just Normandin’s cars, it’s Normandin Chrysler, or Normandin Plymouth, or perhaps the name of the town like Denver Ford. Dealers could no longer sell new cars from competing brands because the dealership was seen as the extension of the carmaker, contracts started to include requirements that dealers look a certain way, have common signage, provide a minimum amount of support for the product, train employees in a certain way. Just like McDonald’s. 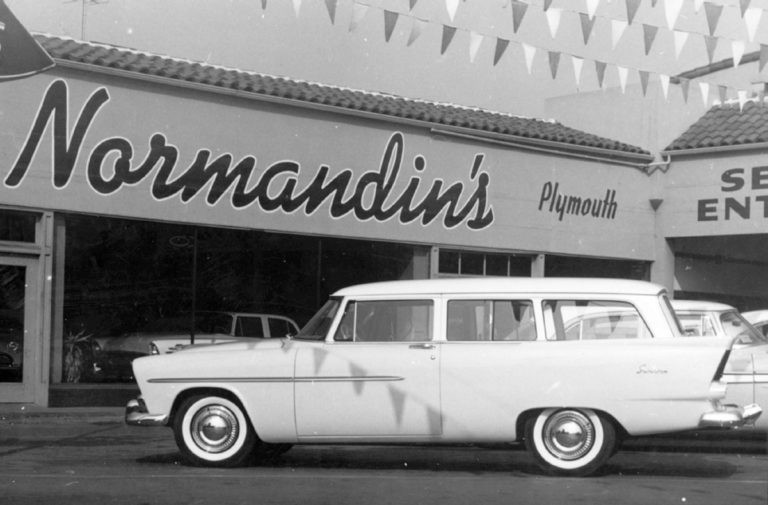 The franchisee dealer model started as one of mutual dependence. In a world without instant inventory reporting, national marketing strategies, cable TV, or social media, a local dealer was better equipped to know what customers were interested in buying locally. Smaller car makers, of which there were many in the 1920s, didn’t have the capital to invest in direct-to-consumer sales and the door-to-door sales model didn’t work out. Over the decades the dealers and manufacturers grew interdependent, despite the sometimes adversarial relationship. Over time local dealers banded together and were successful at protecting themselves from what they saw as unfair direct competition from the companies they had franchised their name from bypassing laws restricting direct sales.

The funky side-effect of the franchised dealer model is the same side effect we see in franchise restaurants. Customer impressions of Wendy’s or Taco Bell may be initially driven by the advertising you see for that new burger or crunchy taco on TV, but your final impression of the product is managed almost completely by the franchisee. Was that Taco Bell clean? Did the Taco have too much sauce on it? Too little? Have you had a bad experience at a fast food place and decided you’ll never eat at X again?

We see the same interesting coupling of consumer impressions with dealers. When your only interaction with a brand is via a dealer that bears the same logo, you tend to conflate the dealer and the brand. I hear statements like “I hate Volkswagen, their dealer is terrible”. What intrigues me is that we don’t see the same association with Powersports products like ATVs or side-by-sides. If you have a bad experience at one dealer, you simply go to a different store to buy your next Honda or Kawasaki or Polaris, and chances are that same-store sells all three. Instead, impressions are more like retail. If the dude at Best Buy was a horrible salesperson, I don’t tell myself “I’ll never buy another Android phone again because of that guy at Best Buy,” I’m more likely to think “I’ll just go somewhere else to buy an Android phone.”

With brand image being so important to car companies I argue that the dealer model is outdated. Apple and Tesla have proved that there is value in direct sales because you can control every aspect of the sales process and customer interaction. However, that isn’t the only answer. In my wild mind, I think giving dealers more control, not less is the right way to fix things.

Imagine for a moment if GM, Ford, and Stellantis (formerly Fiat-Chrysler) allowed their dealers to sell competitive trucks on the same dealer lot. Head explosion, I know, but imagine for a moment a “Truck Store.” The pickup equivalent of Best Buy, where you head down to “Austin Trucks” and all the new trucks are on sale side-by-side. Want to test drive a Chevy back to back with a Nissan? Toyota? Ford? Sure thing! The dealer’s mission changes from selling you a “Chevy” to selling you a “truck.” Dealers win because they can stock more of what’s hot in their local area, consumers get more choice, and makers of uncompetitive products have to choose to make their wares competitive or exit the market.

Better yet, imagine an EV store. I’m sure anyone out there who’s bought an EV from a mainstream brand has had an experience similar to mine. You do all your research and head down to the dealer. The first sales guy says “huh, I don’t think we have any of those, let me check.” 20 minutes later, the “EV Specialist” comes out (and the EV specialist is almost always some old dude that took the online training video and doesn’t really know much about EVs). You ask a few random questions, realize you know more than the sales guy, then discover you can’t test drive the EV because the battery is dead. Then you buy something else. The dealer owners look at the sales numbers and think: wow, EVs just don’t sell.

Imagine if, on the other hand, you could have a dealership with all the modern EVs, from a Nissan Leaf to a BMW iX on the lot. All the cars on the lot are fully charged, the dealership vibe is hip and modern, it’s even solar-powered. The sales guy can guide you through the products, which EV is right for you? Is range important? Charging speed? Roominess? Warranty?

Back to reality
Sadly we’re unlikely to see anything like that soon, the uncertainty and incentive structures around dealerships and their relationship to the manufacturer just don’t allow this, however much a dealer might want to give it a try. For this, the blame has to lay squarely with the traditional car manufacturers concerned about losing control over the retail point of sale, despite them not having actual control of that final point of sale in the first place.

Here’s the thing, however, if car companies would relinquish that control and allow more retail-like car store/truck store sales, GM, Ford, Toyota, etc would regain control over their brand. Right now the dealer has a massive influence on how a brand is perceived, but the moment you have a more retail model that controls moves squarely to the company that built the vehicle.