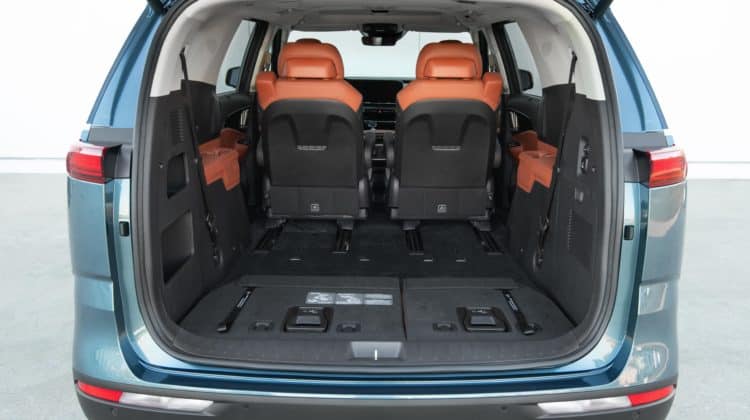 Episode 2 of the minivan series sees us fitting as much stuff as we can inside four vehicles. Every single brand that’s still in the minivan segment knows that this vehicle is going to get used by families and carry a lot of gear. The Honda Odyssey, Chrysler Pacifica, and Toyota Sienna all have similar cargo capacities that are within spitting distance of each other. The Kia Carnival, however, is larger than the other three.

Three were able to easily accommodate six roller bags while the Carnival was the only minivan that can accommodate eight. The third row folds manually into a tub in every contender except the Pacifica, which is available with a power-operated one on the non-hybrid model. The Honda Odyssey has the most usably shaped cargo area while the Pacifica has the flattest floor. Honda’s third row folds the easiest because all you need to do is pull a strap for it to fold into its tub and it’s just as easy to put back in place.

Chrysler requires you to pull two straps but it’s just as easy to operate as the Honda’s. Toyota’s system requires you to pull a lever and then a strap to get it back in place; however, securing it back in its tub requires a gentle push to fully latch in. Its third-row seat hinges also impact the space in the tub and its second-row is no longer removable. Kia’s third row folds like the Toyota’s but the latches and straps are a little more finicky than expected. All four minivans have similar hatch heights for easy access to the cargo area. The Chrysler’s button to close the power liftgate down is on the side, making it easier to access for shorter people.

When it comes to small-item storage, the Chrysler Pacifica takes the lead. It’s the only minivan with at least two cupholders big enough to hold two 32-ounce hydro flasks and a storage bin that can easily stow a smartphone with a cord attached. The storage below the center console, however, is too small for small bags.

The Honda Odyssey gets a lot of points for its clever storage solutions like the space between the front seats. Its center console storage is big but could be a little deeper. Toyota’s clever center console has a massive bin under it that accommodates a lot of stuff. The tray on the dash easily fits everything from smartphones to keys and wallets. Unfortunately, the cupholders are on the small side. Its center console bin, on the other hand, is respectably large.

When it comes to cargo hauling, the Carnival easily wins versus the other minivans. However, when it comes to knick-knacks and small-item storage, the Sienna takes the cake.

Check out part 1 of the minivan episode here.