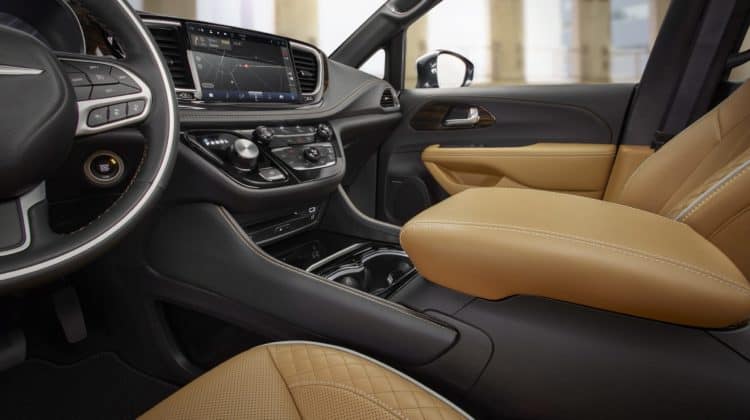 If you’re looking at a minivan for your next vehicle, chances are you’re wanting something comfortable. Luckily, every single entry in the segment emphasizes pampering you and your occupants. Every minivan on sale today has the same type of adjustment for the driver’s seat. However, The Toyota Sienna is the only one with a power-adjustable steering column while the Chrysler Pacifica is the sole entry with a front passenger’s seat with the same range of motion as the driver’s seat.

Second-row comfort is about even across all four entries in the minivan segment. The Toyota Sienna stands out with available captain’s chairs featuring integrated ottomans. However, that’s only on FWD models; likely due to weight, you can’t get an AWD-equipped Sienna with ottomans. Regardless of the version you get, the Sienna’s second row has a long slide feature. Unlike the outgoing model, you can’t take out the Sienna’s second-row because there’s an airbag embedded in them.

The Honda Odyssey, on the other hand, is the only minivan with an eight-seat configuration at the top end trim thanks to the removable center seat in the middle row. You can also slide the middle row sideways provided you take the center position out. Although you can take out the middle row, they’re heavy and the sliding mechanism stays in place.

The Chrysler Pacifica’s middle row is easy to latch and remove. You also get a flat floor when you take the second row out. The best part? They’re more comfortable than the non-electrified version’s Stow N’ Go seats. However, you can’t keep child seats latched and fold the seat.

The Kia Carnival, like its competitors, is only a seven-seater in its most expensive model. However, one of the upper trims is available with a bench. The fun part is that the middle seat in the second row goes so far back that you need to fold the third row down to get it all the way back. The middle row also comes out of the vehicle for extra flexibility unless you get the range-topping model which has non-removable seats. Kia doubles down on the luxury of the Carnival SX Prestige, which features captain’s chairs that are partially powered, slide forward, back, and side to side. They also have heating and ventilation, an integrated ottoman, and a generous recline.

In the third row, all of the minivans are accommodating with the Pacifica and Sienna leading in headroom. The Odyssey and Sienna lead in the legroom department. Some also have a reclining third row for added comfort.

Chrysler wins out in the infotainment department because of its comprehensive UConnect infotainment system with a rear-seat entertainment system complete with games to entertain the kiddos. The Carnival’s on the other hand has Netflix and other apps consumers frequently use. If you’re looking for a surround-view camera option, the Carnival, Sienna, and Pacifica are the only ones with it. Should you want to go one step further and need automatic parking capability, the Pacifica is the only minivan with that capability.